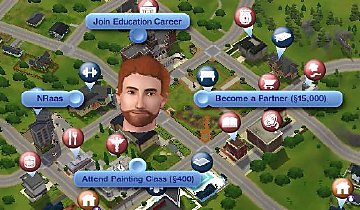 507 Thanks  Thanks     106 Favourited
I originally made this Mod as a vanity project, I was playing a "Mafia" Sim and wanted him to be able to buy off the police and the politicians. Then I thought, "well why not extend it, and make them all investable?" So I did.

Presenting, Sim Monopoly. The name came because as I was doing the subway package, it reminded me forcefully of the board game Monopoly.

What This Mod Does
This Mod will allow your Sim's to invest in the following rabbitholes: City Hall, Police Station, Military Base, Mauseleoum, School, and Subways.

So, I can invest in these rabbit holes, how much is it going to cost me?

Below is a list of investment costs, returns, and my reasoning.

Police, Military and City Hall (seperate rabbitholes)
For these I used the "Hospital" tunings, as it was the largest amount's I could find, the way I see it your Sim's are going to need to be quite rich to buy these establishments off.

Bridgeport's Combined Police, Military and City Hall
The reasoning here was simple, it's three rabbitholes rolled into one, (which conveniently also happened to all be previously uninvestable, so I could keep the package count low) so therefore, everything should be 3 times as much.

Mausoleum
I honestly can't see the Mausoleum returning a huge amount of profit, so I have used the "Grocery Store" tunings for this one, as it is fairly cheap.


School
Schools aren't really known for their profitability, so therefore although you can invest in this one, you won't get any returns. Just think of it as making a generous donation to the school.
The amount spent to invest is halfed from the hospital tuning I was using as a baseline.

Subway's
Subway's presented me with a bit of a problem. Originally I was going to make them the same as the hospital, but then I discovered that each Subway station needs to be bought seperately. As there are 9 Subway's in Bridgeport the amount's have all been divided by 9, and then rounded down to the nearest 10.

Compatibility
This Mod should be compatible with all EP's and SP's unless you use an obviously LN package, but I got a bit lazy with my testing and only tested it using Late Night using any game launcher. Mod was made with game version 1.18 and is definitely CORE (previously EGC) compatible. The City Hall package, (and possibly others... but that hasn't been proved yet) is incompatible with AwesomeMod.

Installation
Just drag and drop into Mods\Packages as normal.

Please note that if playing Late Night you will need to install both the combo city hall package, and the individual rabbithole packages as the combo one will only work in Bridgeport

It doesn't work
Well actually it does, I have been playing with this mod since LN came out and have had zero issues with it.