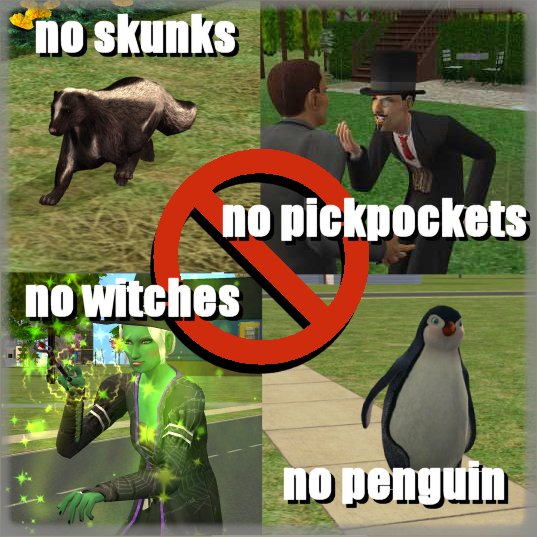 735 Thanks  Thanks     107 Favourited
Four separate mods for four separate issues. Mix and match according to your needs and installed EPs or collect all four!

MTS2_NDR_PETS_NoSkunk Requires Pets
Sure, he's cute and all, but that's what my Hello Kitty pencil-topper collection is for.
Mod denies the send skunk call so the little *expletive deleted* will no longer appear to harass your Sims and their pets. Seriously, you'd think someone with 8 points of nature enthusiasm (FT) would know better than to stomp their own queue to go pet a skunk.

Edit: 08/02/11 The NoSkunk hack runs off of the stray (as in stray cats and dogs) generation BHAV. If you have other mods that affect stray generation, you may want to make sure that mine loads last- either by placing it in an alphabetically later subfolder or by renaming the file so it falls last alphabetically.

MTS2_NDR_BV_NoPickpocket Requires Bon Voyage
If I had made a wish list back in 2007 of things I wanted in the game, somehow, I don't think a moustachioed victorian villian whose sole purpose is to perform creepy animations with my Sims and give them an aspiration hit while eating up processor would have been high on my list. Somebody thought it was a good idea. I do not.

MTS2_NDR_SNS_NoPenguin Requires Seasons
Apparently some people like the penguin. I am not among them. Sure, it has that impish smile. Sure, it's kind of precious the way he sort of wibble wobbles along. All it wants is fish and to make you smile. I want it to go back to Happy Feet where it came from.

MTS2_NDR_AL_NoNPCWitches Requires Apartment Life
Since there are other ways to become a witch, I really see no reason to suffer lot lag every 10 minutes as Pleasantview's magical population decides that they don't care for the current weather. Playable witches are unaffected.

EDIT: 08/04/11
Fixed an isssue with NoNPCWitches throwing an error on comm lots.
This hack stubs the "main" function of NPC witches, so they don't appear anywhere. If you go to a secret witch lot (which spawns a witch) there will be an error. I recommend my own Buyable Reagents or treeag's No Reagents Needed mods so that you don't have to bother with the NPCs at all.

UPDATE: 10/25/11
NoPenguins was throwing errors and creating game slowdown. Reworked the file so it runs off a different BHAV.
UPDATE: 06/02/2015
NoPenguins (again!) was causing snow not to accumulate during winter. Fixed. Sorry
Additional Credits:
Inspired by Croquignol and his Get rid of Mrs. Crumplebottom hack. All my attempts to mod the game stem from this.
Thanks as always to Quaxi and all the folks that made SimPE

Get rid of Mrs. Crumplebottom