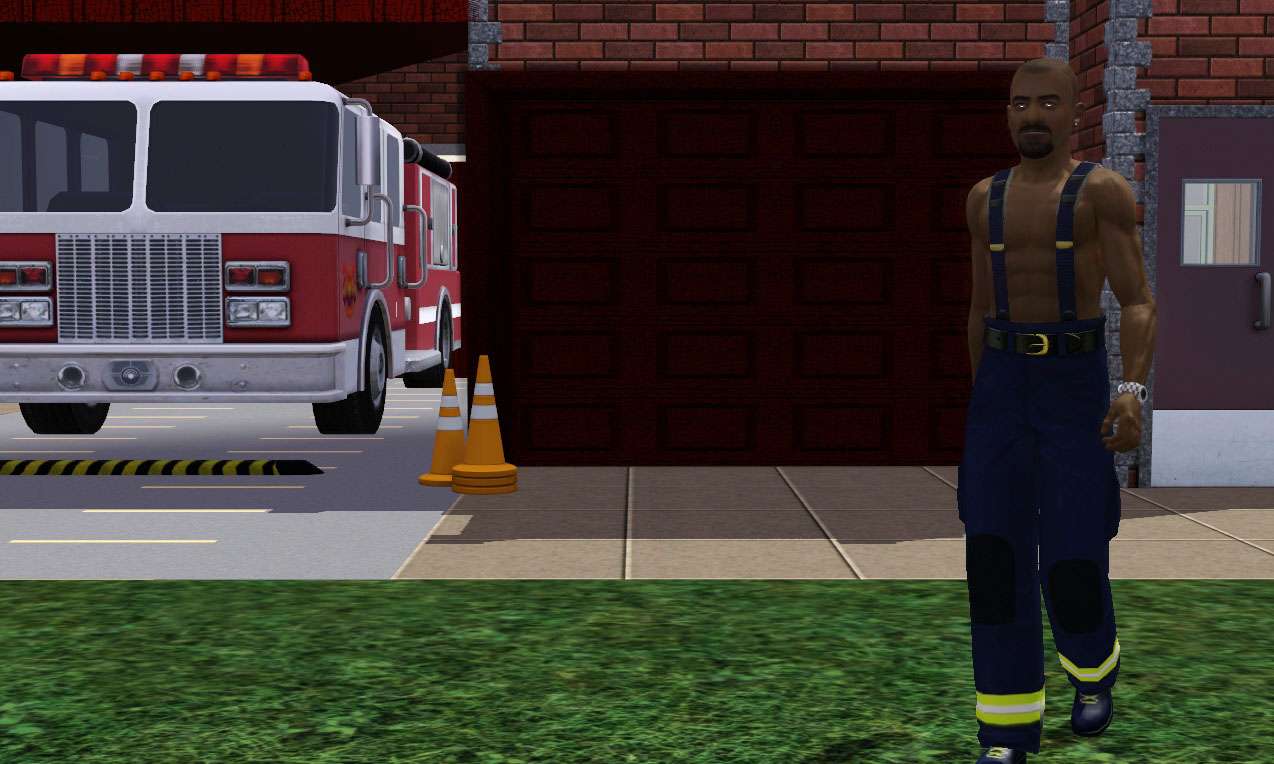 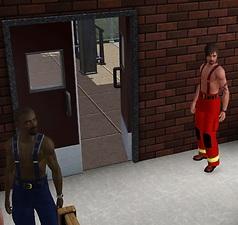 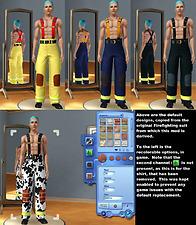 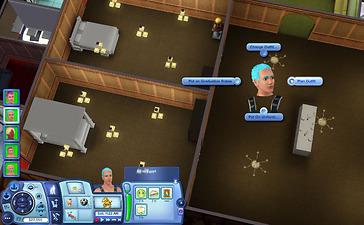 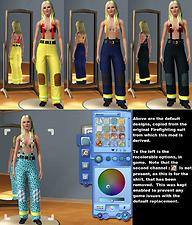 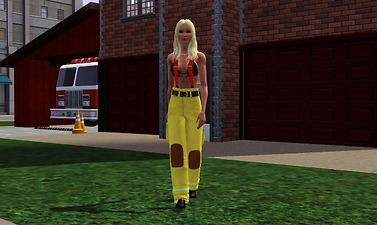 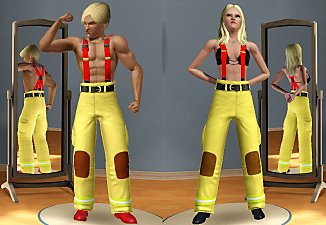 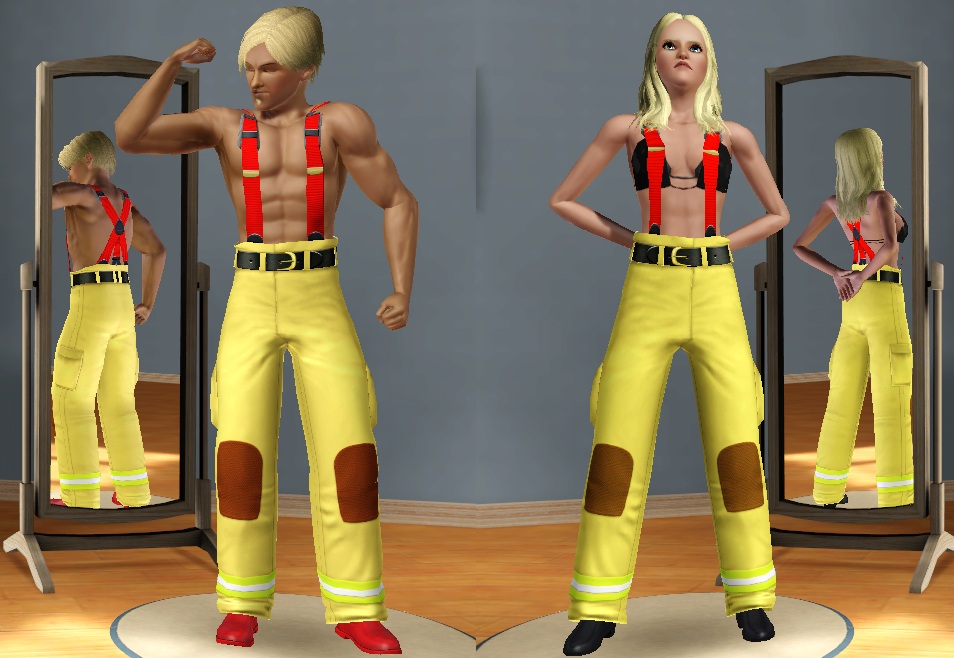 Mayor Lars Ony saw that many cities around the world have Sexy Firemen or Sexy Firewomen calanders, so decided to make a city mandate that all firefighters must be ready for an impromptu photo-shoot at any time, and are therefore not allowed shirts, or bras under their fire coats.

Now you have the option to convert your Sims 3 city to this decree as well with this download!

This MOD uses the Off-Duty fire outfit that comes with Ambitions for both males and females, with the shirts removed (but the suspenders covering their chests). With this download you can chose which sex to download, and if you want to replace this carrer clothing, or have a standalone version. For the replacement, Ambitions must be installed, and you must join the Firefighter Carrer, once you have joined the firefighter carrer, the outfits will unlock for every sim in the house, like it would without this mod. Once unlocked this outfit is available for carrer, and everyday. For the standalone version, look under full body outfits for either Men or women, this version allows this clothing for carrers as well.

The included designs are mirror images of the In game versions, I took care to make sure the colors were as close to the originals as possible, the screenshots for the outfit have a Bikini bra on top for the females, this bikini is not present in the actual design, for a sexy twist! Note that the Second channel on the Screenshots for the re-coloring options will do nothing for the in-game clothing, and are not present on the Stand alone version, but to prevent any conflicts, these channels are enabled for the Default replacement versions. Here are the included designs: 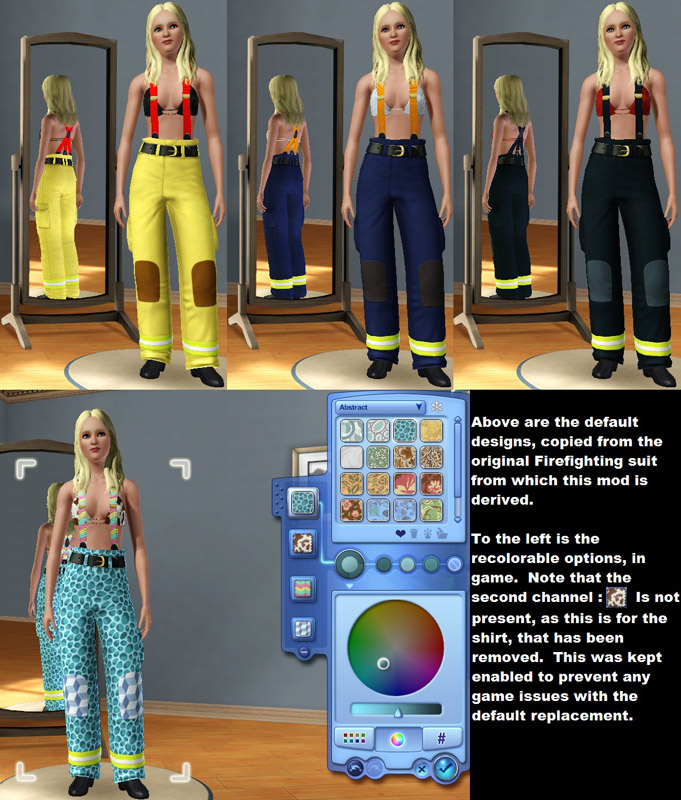 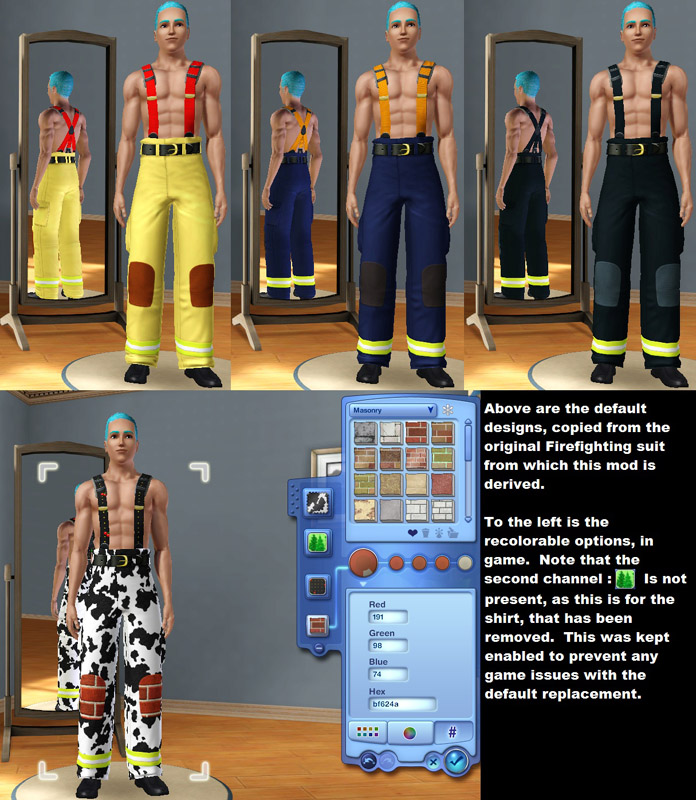 Bugs:
The only bug I have found is that when telling your sim what to do, they will be a floating head with suspenders, but no chest, like in this example: 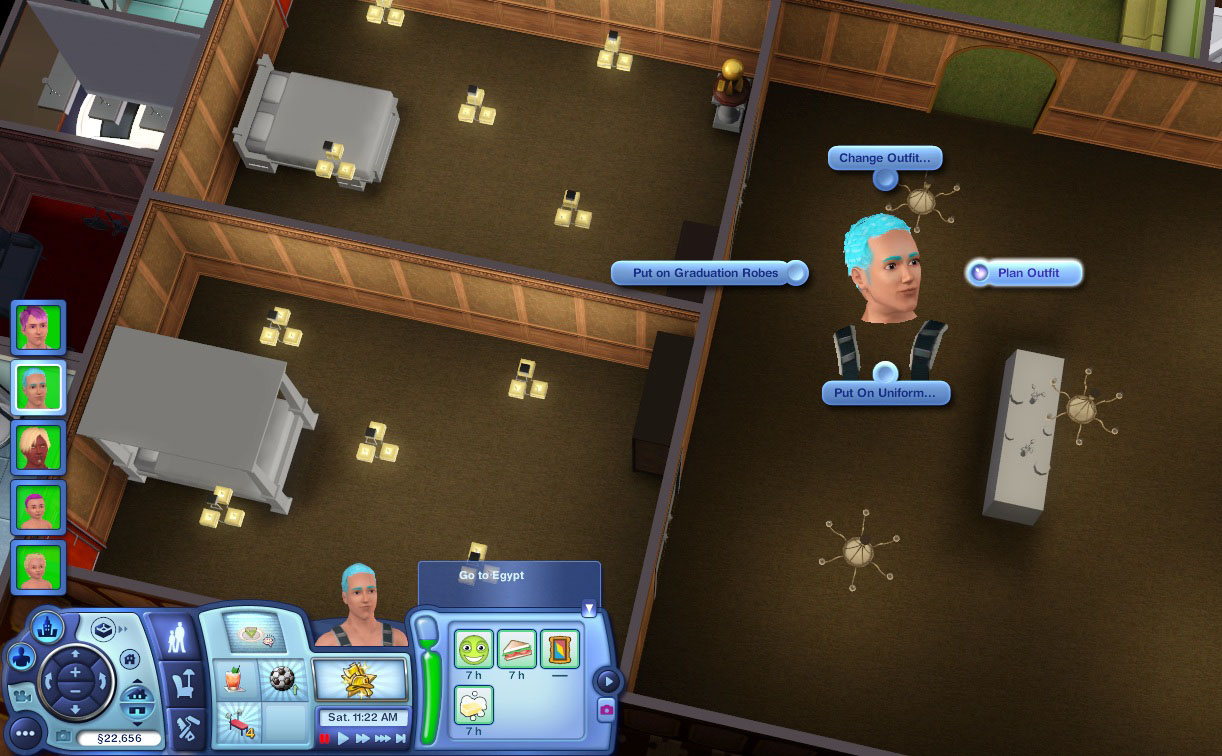 The Male version has a bit of a clipping error for certain poses or actions for the Suspenders on the back shoulders, I am not aware of a way to fix this issue, as the bone deltas appear to move correctly with most poses, just not with a few.

When re-coloring the outfits, the outfit will not light up to show what area you are modifying like it does with other outfits, this is a by-product of the way in which this clothing was made, and is not avoidable.

Additional Credits:
Thanks to the CTU team for CTU!

If you need more info, see:
Also Thanked - Users who thanked this download also thanked:
Superhero Suits for everyone
by guidion
Two-Piece Pajamas for Toddlers
by frizelbliz
Jeans that fit into Boots (All Ages & Both Genders)
by frizelbliz
Unisex Medieval Child's Tunic - Ye Olde Kingdom of Pudding
by The Merrye Makers
Medieval Crowns, Circlets, and Hat Hair - Ye Olde Kingdom of Pudding
by The Merrye Makers
TS3- Toddler: a new blouse for her and a new shirt for him
by Cocomama
Basic Bottoms for Elders (Male and Female)
by Marcos_Edson
Unhidden Ambitions Stylist outfits
by sweetdevil
Playtime Pants
by HystericalParoxysm
Medieval clothes for boys
by Kiara24
Back to top