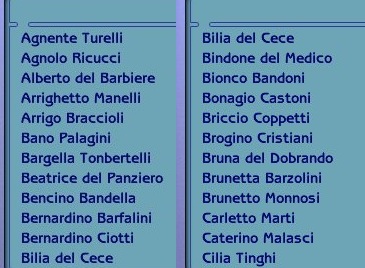 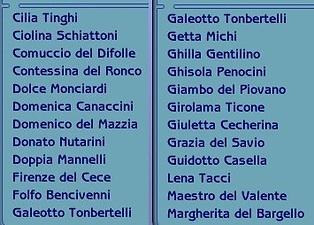 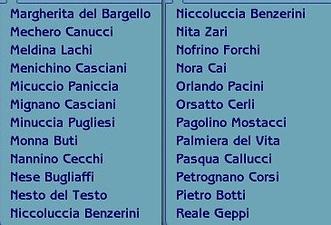 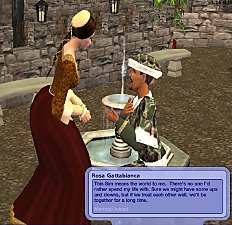 Updated 11/3/11 - Minor fixes, please re-download - I caught a few small problems with my name mods, mostly extra returns at the end of names that was causing the names to show on two lines instead of one, also a few Norse names that had snuck in. Please redownload to avoid these cosmetic problems.

Here’s another historical name mod, this one set in Central Renaissance Italy. These names were drawn from a census taken in Florence in 1427. There are 1318 male first names, and 328 female ones, plus 1320 last names of both genders to play with, as well. 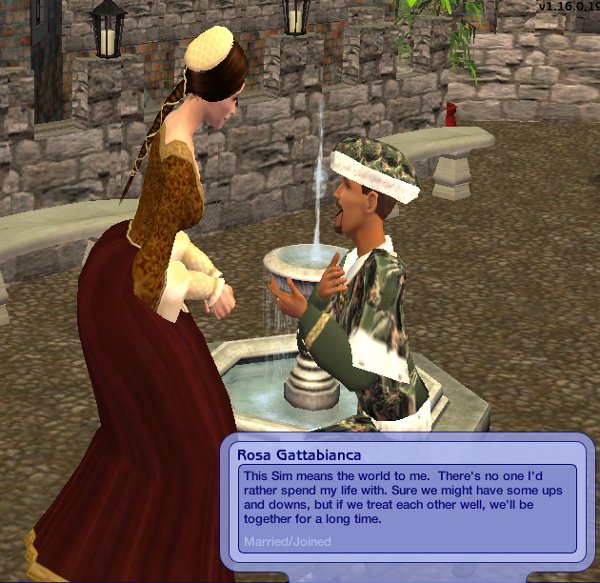 The last names I chose to list were the “family” names , as opposed to the patronymics. This makes it easier when you’re dealing with generations, as they don’t change from one generation to the next. You can form a family name for your own sims by taking the name of a male “ancestor” and putting it in the genitive case (usually, just putting an “i” on the end, see my source for a longer description of exceptions.) For instance “Leonardo” becomes “Leonardi “, “Antonio” would just drop the “o” and be “Antoni”, and “Giovanni” would stay the same. If you want true patronymics, drawn from the father’s name, that’s simple as well. Just add “di” (or “d’ “ if the name starts with a vowel) in front of the name of the father. Our examples above would become “di Leonardo”, “d’Antonio” and “di Giovanni.” You can even combine the two, if you wish a long name, such as “Bianca d’Antonio Leonardi”, which is Bianca, daughter of Antonio, of the Leonardi family, or Bianca, daughter of Antonio Leonardi, to phrase it another way. If you need a little assistance with pronouncing some of the names, here is one guide for Italian pronunciation, and there are many more available online.

Names were drawn, as usual, from lists at the wonderful Academy of St. Gabriel site. For this particular mod, I used the article Names in 15th Century Florence and her Dominions: the Condado , by Juliana de Luna. This mod is Base Game compatible, and has been tested as such.