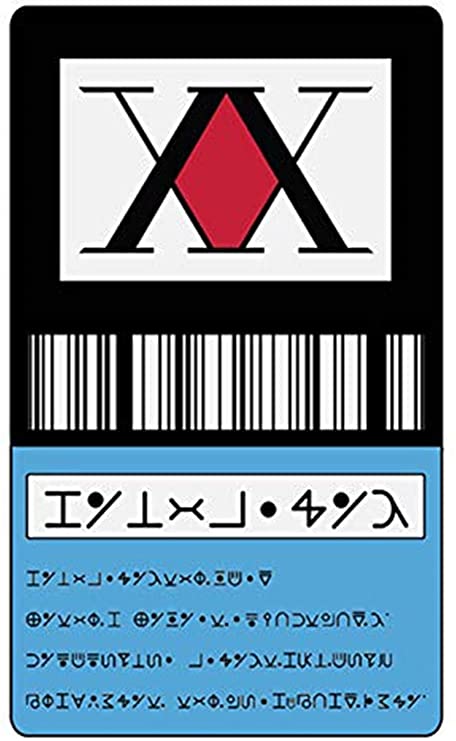 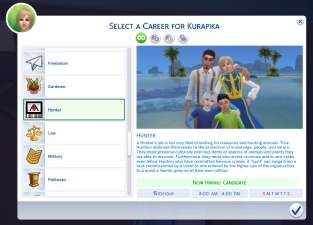 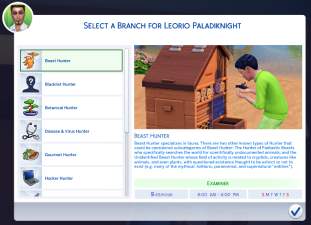 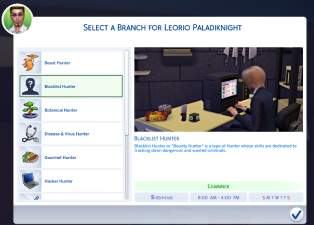 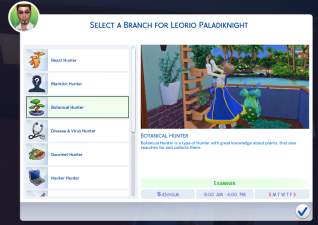 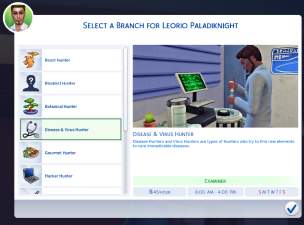 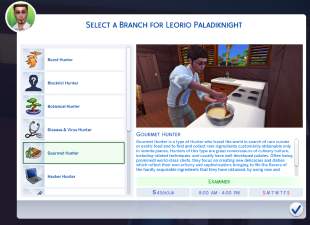 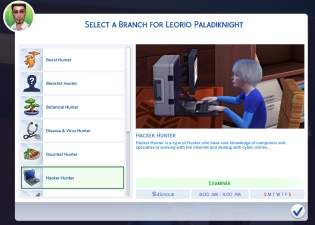 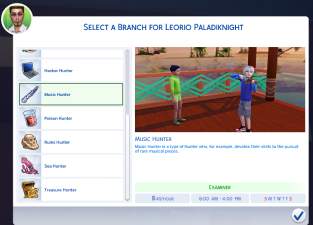 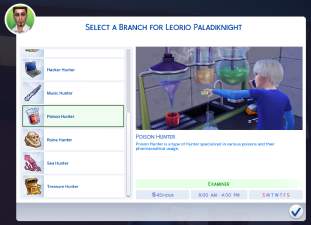 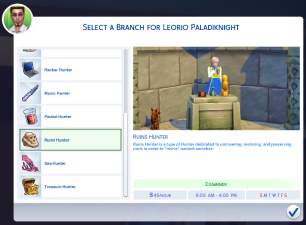 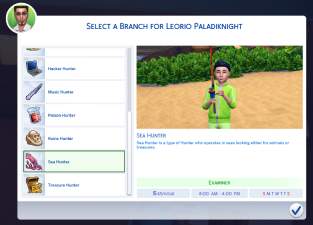 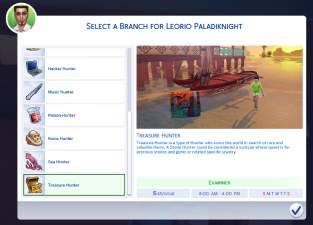 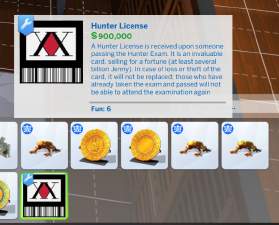 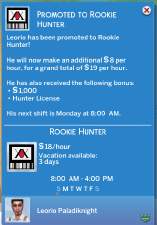 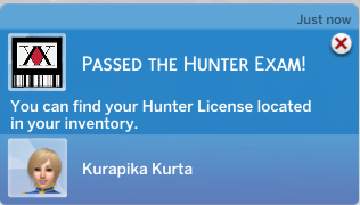 114 Thanks  Thanks     13 Favourited
I decided to take a break from Medieval career mods to do something quite different -- a Hunter Career based on the manga/anime Hunter x Hunter (HxH).

This is a very large career with eleven (11) branches! Every branch contains Work from Home options and a multitude of Promotion Objectives meant to simulate the complex and prestigious duties of Hunters in the HxH series. If you don't wish to play through each Objective, use a different mod like MCCC or UI Cheats to level up manually.

Many objectives and interactions are from EP, GP, and SP packs, but the career is 100% playable with Base Game only.

A Hunter's job is not only that of looking for treasures and hunting animals. True Hunters dedicate themselves to the protection of knowledge, people, and nature. They must preserve culturally precious items or species of animals and plants they are able to discover. Furthermore, they must also arrest criminals and in rare cases even fellow Hunters who have committed heinous crimes. A "hunt" can range from a task commissioned by a client to one ordered by the higher-ups of the organization, to a quest a Hunter goes on of their own volition.

Every Hunter starts as a...

Level 1 - Candidate
The great importance of being a Hunter draws thousands of applicants each year. Those who wish to gain their Hunter license must pass the Hunter Exam which is both physically and mentally taxing. Applicants who pass all stages of the exam through the complex and ever-changing scoring system, may then become Hunters who gain the following benefits:
- 95% of all public facilities can be used at no cost. Furthermore, all such services are provided at first class.
- Unrivaled freedom to travel around the world. Access is granted to about 90% of countries which normally restrict the entry of outsiders, and access to 75% of areas that the general public is prohibited from entering.
- Almost no legal responsibility for murder.
- The ability to sell the Hunter License as a valuable collector's item. Though only the original owner of a Hunter License can take advantage of the normal benefits, it can be still sold for enough money to support the seller for at least 7 generations in luxury.
- The ability to use the license as collateral for a zero-interest loan of 100 million Jenny Symbol 2011 at any bank.
- Access to the secret Hunters-Only Website, where secret intelligence about various subjects, uploaded by other Hunters, can be purchased.
Pay: $10/hr
Objectives: Get Confident, Make 2 Friends

Level 2 - Rookie Hunter
Congratulations! You passed the Hunter Exam and are now an official member of the Hunter Association. In order to keep this title, you must adhere to the Hunter Bylaws.
Pay: $18/hr
Objectives: Go Jogging, Level Up Logic Skill
NOTE: Your Sim receives a notification that they "Passed the Hunter Exam" and a Hunter License is rewarded to their Inventory. This item is worth $900,000, but if you know anything about the series, you know you're not supposed to sell it


Beast Hunter specializes in fauna. There are two other known types of Hunter that could possibly be considered subcategories of Beast Hunter: The Hunter of Fantastic Beasts who specifically searches the world for scientifically undocumented animals; and the Unidentified Beast Hunter whose field of activity is related to cryptids, creatures like animals, and even plants, with questioned existence thought to be extinct or not to exist (e.g. many of the mythical, folkloric, paranormal, and supernatural "entities").
Objectives: Have A Pet In Your Household, Buy 2 Pet Toys, Be Friends with 2 Pets, Successfully Train Out 2 Pet Misbehaviors, Collect Insects From Insect Farm, Collect 3 Frogs, Collect 10 Insects
Work From Home Assignments: Catch 4 Fish, Collect 4 Insects, Collect 2 Frogs
Recommended for use with Cats & Dogs and Eco Lifestyle packs


Blacklist Hunter or "Bounty Hunter" is a type of Hunter whose skills are dedicated to tracking down dangerous and wanted criminals.
Objectives: Level Up Logic Skill, Ask About Career, Lie About Career, Stretch, Do Push Ups, Do Sit Ups, Play Chess With Another Sim, Ponder Moves, Share Secret 2 Times, Purchase Listening Devices, Plant Bug On Sim, Listen In On Sim, Go Jogging 2 Hours, Go to Work 3 Days
Work From Home Assignments: Play Chess, Watch News, Ask About Another Sim
Recommended for use with Strangerville pack


Gourmet Hunter is a type of Hunter who travel the world in search of rare cuisine or exotic food and to find and collect rare ingredients customarily obtainable only in remote places. Hunters of this type are great connoisseurs of culinary culture, including related techniques, and usually have well-developed palates. Often being prominent world-class chefs, they focus on creating new delicacies and dishes which reflect their own artistry and sophistication; bringing to life the flavors of the hardly acquirable ingredients that they have obtained, by using new and creative styles of cooking recipes. Secondarily, they are frequently called on to chase and capture poachers.
Objectives: Buy A Bar (object), Practice Making Drinks, Make Favorite Drink, Grill Some Food, Bake Some Food, Grab Serving, Make Cupcakes, Cook A Gourmet Meal, Eat 10 Plants, Mix 10 Drinks, Cook 3 Gourmet Dishes
Work From Home Assignments: Watch Cooking Channel, Level Up Cooking Skill


Hacker Hunter is a type of Hunter who have vast knowledge of computers and specialize in working with the Internet and dealing with cyber crimes.
Objectives: Own A Computer, Browse Web, Practice Programming, Purchase Upgrade Parts, Repair Or Upgrade An Object, Make Plugin, Make Mobile App, Make Virus, Hack (all), Hack Work Performance, Repair A Computer, Repair A TV
Work From Home Assignments: Do A Programming Side Job


ALL career branches have the same levels and each Hunter type allows the opportunity to become Chairman one day!

Level 3 - Examiner
The Exam Commission is tasked with the organization and management of the Hunter Exam. The examiners are nominated by a board every year and supervise a trial. Examiners are largely free to choose the content of their trial, as long as they satisfy agreed-upon criteria settled by the Exam Commission.
Pay: $45/hr

Level 4 - Single-Star Hunter
One Star is given to Hunters who have produced remarkable achievements in a particular field. They are promoted to the status of Single-Star Hunter and recieve special benefits under this title.
Pay: $75/hr

Level 5 - Double-Star Hunter
Two Stars are given to Hunters who fulfill the first 5 articles of the Hunter Bylaws, who hold an official position, and who have mentored at least one junior student who has received one star. Once these tasks have been completed, the individual can be promoted to the status of Double-Star Hunter.
Pay: $90/hr

Level 6 - Triple-Star Hunter
Three Stars are given to Hunters who fulfill the first 6 articles of the Hunter Bylaws and who have produced remarkable achievements in multiple fields. When these tasks have been completed, the individual can be promoted to the status of Triple-Star Hunter. This is the rarest and most difficult rank to obtain, and it is considered a great honor. Out of the over 600 Hunters in the Hunter Association, the number of Triple-Star Hunters is only about 10.
Pay: $120/hr

Level 7 - Vice Chairman
The Vice Chairman is the second highest-ranking individual in the Hunter Association, exceeding even the staff advisors. They are appointed directly by the Chairman. Should the position of Chairman be vacated, the Vice Chairman gains deputy power until the conclusion of the election.
Pay: $500/hr

Level 8 - Chairman
The Chairman, also known as Chief Executive, is the leader of the Hunter Association. They have the most power and authority within the organization. The Chairman has the jurisdiction to select the Vice Chairman and staff to their cabinet. Each year, the Chairman decides the criteria for selecting Hunter Examination staff and must approve each trial to be held in the exam.
Pay: $900/hr

Known Issues: Playing the Work From Home assignments will always make the boss "disappointed" in your Sim's work performance, no matter how many assignments they complete. The Sim will only get paid a total daily max of $10 from working from home. I tried many things to fix this, asked more experienced modders, but no one could quite figure it out. This is a complicated issue, which is why you don't see many custom careers with Work From Home functionality. The funny thing is; however, Hunters in the HxH series don't get a salary for their work... so this issue kind of fits the content.

Some career descriptions are paraphrased from the HxH Wiki site.

LANGUAGE: These are only in English for now, but if anyone would like to translate them, go for it and please comment with your additions.

Thank you to MizoreYukii and llazyneiph for their consistently patient advice and help with this.