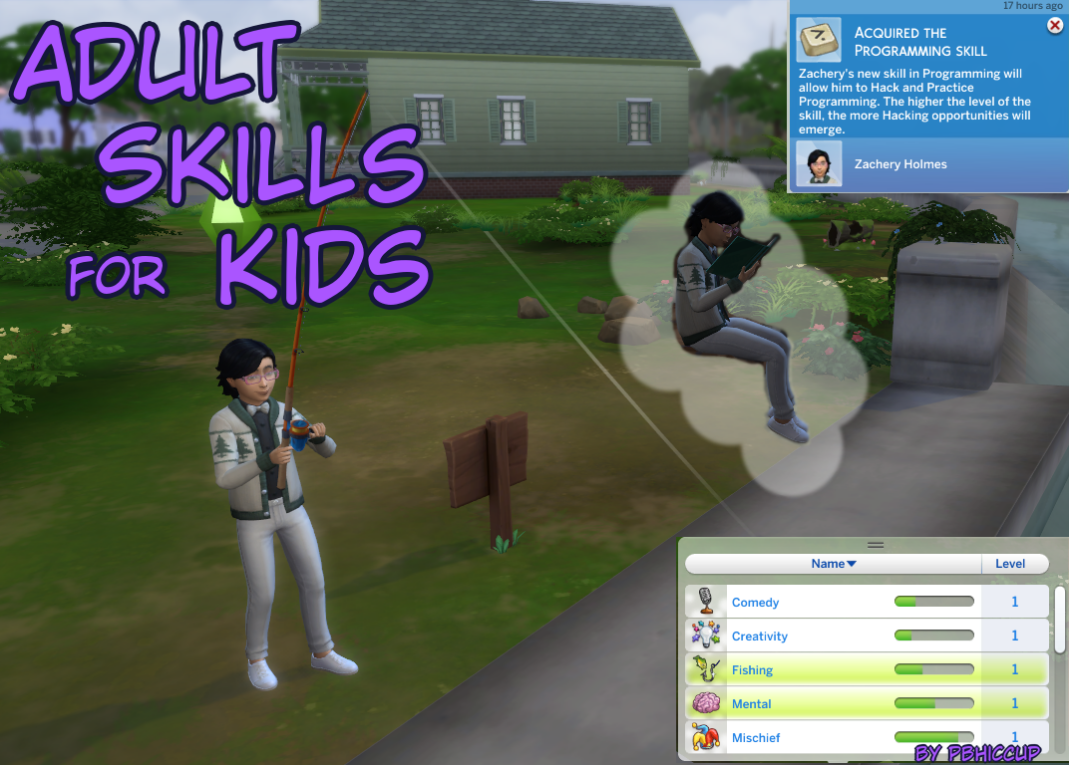 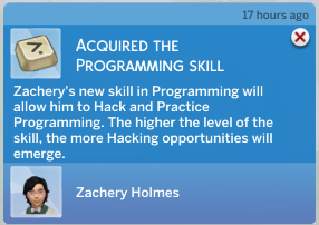 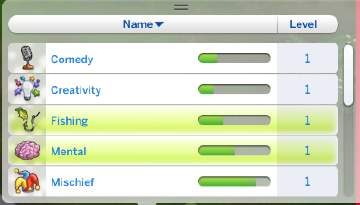 33,173 Downloads 222 Thanks  Thanks 65 Favourited 51,028 Views
Created by PBHiccup
View all Downloads
Uploaded: 27th Apr 2021 at 1:07 AM
What it does:
This mod allows children to learn and make progress on many of the adult skills that, to be fair, kids are also very capable of doing or learning. It makes no sense to me that kids can fish, yet can’t get the fishing skill, and the same goes for instruments. They can’t even learn the comedy or mischief skills either, it’s absolutely ridiculous. Now before we get into the nitty gritty of what skills kids can get now, I do also want to say, that this mod was made to work with my other mod: Kids Keep Skills, which allows child skills to evolve into matching adult skills on age up into a teen, so this mod does not add the Fitness, Painting, Logic, or Charisma skills for kids, as those are adjusted in my other mod. Also please note that skills that would normally increase a child skill, will now increase not only the new unlocked adult skill, but the corresponding child skill as well at the same time.


But why?
Much like my issue with kids not retaining sets of skills upon age up, I also find it utterly ridiculous that kids can learn some skills like knitting, yet others like fishing are grouped into a child skill instead. And don’t get me started on things like programming or the instruments… I know I’m not the only one at this point, so hopefully this’ll help others out too to make kids seem less… useless?

While the skills are unlocked, it doesn’t add the interactions (i.e. kids can learn the programming skill, but still can’t program on the computer)

Add interactions with skill objects as mentioned in Known Issues above


Nerdy Details:
Using S4S, I went into the adult skills and just added Child in as a classification of age that can obtain those skills. Nothing really fancy to it just yet.


Special Thanks and Credits:
I couldn't have even begun to learn how to do any of this without the Sims 4 Studio.


How to Download/Install:
If you only have the base game, or only want the base game skills, then you’ll just download the Adult Skills for Kids zip file. If you also have any of the packs with the skills mentioned above, you’ll also want to download the ASK Expansion Skills zip file as well. To install the proper expansions, make sure to only extract the .package files for expansions you own and want the skills from, or delete them from the mod folder after extracting.
Other Information