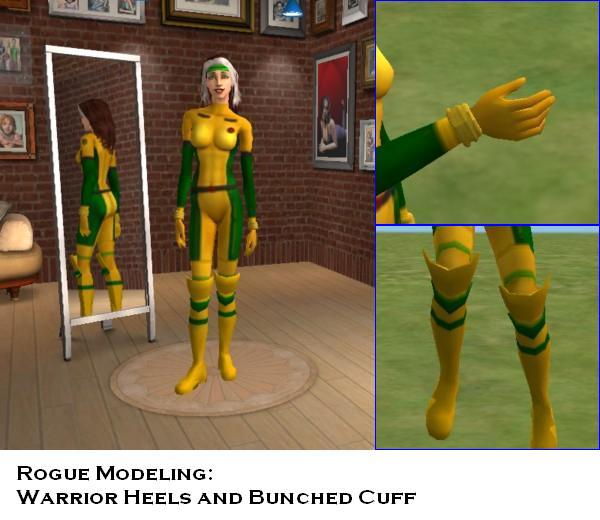 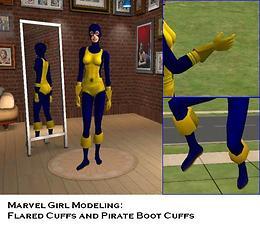 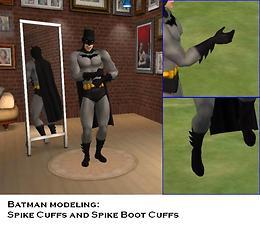 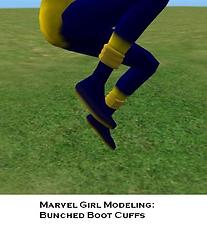 80,679 Downloads Quick download 1,690 Thanks  Thanks 61 Favourited 187,072 Views
Picked Upload!   This is a picked upload! It showcases some of the best talent and creativity available on MTS and in the community.

That was the most productive "hiatus" in history

. I'm a lot happier with all this stuff. And there is quite a bit of it.

These are just some boots and gloves (kinda - see notes) for your sim. Some were made with specific characters in mind, and some I felt like making. I did color them all to match the character modeling them, but that doesn't mean they really go with that character. For example, Batman has spikey gloves, but I don't think he has spikey boots. I just thought the spikes were cool, so I made them in boot form. The bunched cuffs would also probably make nifty wrist thingies for the guys from Dragonball Z, now that I think about it.

Notes:
The files that say "Boots" are full boots that will totally cover your sim's foot. The files that say "BootCuff" are cuffs that fit on the leg, and the files that just say "Cuff" are cuffs that fit on the arm. For the cuffs, you have to color the sim's outfit, legs or hands, to give the illusion of a glove or boot. It was too hard to make them all full boots and gloves, and they ended up looking bad. I think we actually talked about this in my computer architecture class. "Good design requires good compromise."

I also uploaded special meshes to fit Marvine & BeosBoxBoy's Bodybuilder mesh if the regular one wouldn't, as that's used a lot as well. Those meshes are only for adult males.

All meshes except the Bodybuilder and Warrior are for males and females, child-adult. You can wear them with other accessories, but you can't wear more than one glove at a time or more than one boot at a time. These will only appear with everyday, workout, and formal outfits. I thought about it, and it seemed silly to keep boots on when you're swimming and such. If your hero sim swims in his uniform, well, he'll just have to make do. I reuploaded my V-Shaped Boots and Spike Cuffs from my last post to reflect this change, and to hopefully fix an issue with bleeding through on the V-Shaped Boots.

I labeled the screenshots so you'll know which is which. I also borrowed SynapticSim's screenshot of the V-Shaped boots, because his are way better than mine. I don't think he'll mind. You rock, Syn!

I didn't recolor the outfits to reflect the accessories, so that looks kind of funny, but the important thing is the shape.

Recolor at will, and let me know if there are major issues with any of them.