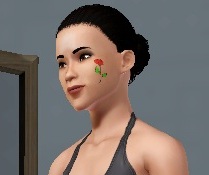 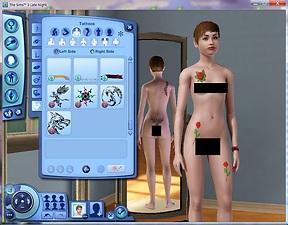 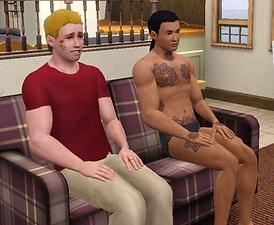 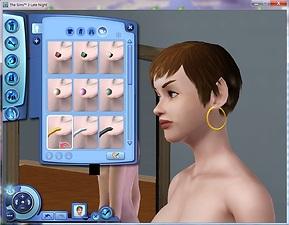 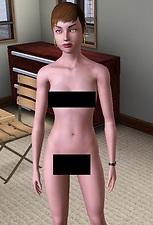 6,241 Thanks  Thanks     1820 Favourited
Picked Upload! This is a picked upload! It showcases some of the best talent and creativity available on MTS and in the community.
The 1.69.43 (the second patch of patch 1.69 released around 1/12/16) Basics and Full versions are now available.

A 1.67 Steam-compatible version is added. (This is the latest version on Steam.)

The first and second 1.69 and all other previous versions, now including Steam versions 1.50 - 1.66, are still available from the XCAS obsolete versions site: https://sites.google.com/site/cmarxcas/ - Please note the new address!

Have you thought that the game tattoo locations are a bit... limited? Do you have custom sliders or want to increase slider range? Would you like some of your sims to wear a ring or earring when naked? Or do you have custom accessories that you'd like your sim to wear in the shower without having to give them the 'Never Naked' trait? XCAS can do that, plus a few more things.

** This is a CORE mod. It is not compatible with AwesomeMod or any other CORE mod except (probably) Consort's Weight and Fitness Integration. It IS compatible with the NRaas mods. **

Twallan liked this idea so much that he's made it into an extension of NRaas Master Controller, a VERY useful non-core mod that adds new menus and functions for sims and objects in the game. This extension adds the new tattoo locations to the MasterController Basic/Tattoo function. This means those who prefer to use AwesomeMod or Extended Game Core as a core mod can do so and have the added tattoo locations too!

So a huge thanks goes to Twallan for doing this - not to mention taking the pressure off me to try making this non-core!

Now back to our regularly scheduled mod description:

XCAS is a CORE mod designed to be limited to CAS functions. While it does less than more extensive core mods, it's also less likely to have side effects. It is not compatible with any other core mod that replaces UI.dll, like AwesomeMod or Extended Game Core. However, there are some packages included that can be used without the core mod component.

Core mod packages-- download and use only ONE of these, cmar_XCASfull1.xx.zip OR cmar_XCASbasics1.xx.zip.

XCAS full version:
-- All of the above plus:
-- Adds many more tattoo locations

-- Optionally, expands the skin tone picker panel
-- Optionally, increases the body slider range by 2 times. (Fat/thin, fit, and breast size)
-- A package that enables a few base game accessories for the naked outfit
-- A package that lets you tattoo naked (With the sim naked, not you. :D) ** This package will also make sims naked in the body hair panel.

This mod now comes in two flavors: the original, full version and Basic. I realize there are many people who want the slider hacks and the ability to edit the naked outfit but aren't very interested in more tattoo locations, and XCAS Basics is for them. The Full version still has all the extra tattoos.

Please read the Readme files included in each zip file - they will tell you which packages to install to tailor the mod to your taste. Don't just throw every package in the zip into your game - some of them are different versions of the same feature, giving you choices about how you want the mod to work. Note that you can use the 'Extras' packages without the core mod.

Otherwise, install like any other packages. The core package either has to go in the Documents mods location or you need to have d3dx9_31.dll properly installed.

You MUST use a version of the core package that's made for the patch version of your base game. If you don't know the patch version of your game, start the Sims 3 Game Launcher and hover your mouse over the little icons at the bottom left of the Launcher screen. Your base game version is the first three digits of the number you see when hovering over the first icon in the row - for example 1.33. When a new patch comes out, please be patient and I will update the mod.

Delete your cache packages from 'Documents/Electronic Arts/The Sims 3' when installing.

Remove the XCAS packages and/or the extras. If you remove the core component and leave the locations package, the sims should keep their non-game located tattoos until you edit them.

The core component is not compatible with any other core mod, like AwesomeMod, Extended Game Core, or aWT's slider mods. It does appear to be compatible with Consort's Weight and Fitness Integration mod.

With Supernatural there seems to be a glitch in which ALL male body hair gets set to werewolf hair if you have cmar_XCAS_BodyHairforTeens_basegame.package installed. I have no clue why this should happen since those are simple default replacements, but I recommend using this teen body hair mod instead which does not cause this: http://www.modthesims.info/download.php?t=486582 As of 1.39 patch version I've withdrawn my EA teen body hair package since it seems to have some kind of glitch.

When you edit the Naked outfit in CAS, please be aware that leaving the Clothing section while in the naked outfit and then returning can cause other changes (skin, hair, face, etc.) to be lost as soon as you change clothing categories. Note that as of 1.42 the trick of going into tattoos or body hair before returning to clothing no longer works.

The package that expands the skin tone picker and the range of the body sliders is not compatible with any other mod that affects the CAS basics screen - the screen defining the age, gender, skin tone, and fat/thin/fit/breast sliders.

If your game crashes on startup, most likely you have your mods/packages folder in the old Program Files location. I strongly encourage you to look up the help on this site for package installation and switch to the new Documents location. It'll make everything easier.

If the mod is installed correctly but doesn't work or has strange effects, you may have another core mod installed and there's a conflict, or you're running it with the wrong patch version. Also make sure you don't have both XCASfull and XCASbasics installed - they will conflict with each other.

To check for conflicts, I highly recommend Delphy's Dashboard: http://www.modthesims.info/d/387006

** If you need to report a problem - please, please, PLEASE tell me more than 'It doesn't work'. Post exactly what's happening, what functions are working and not working, any error messages, where and how you have your custom content set up, and what other game mods you have - not clothes or hair or sliders or decorations, but what mods you have that change the way the game plays. It may also be helpful if you post your operating system and what expansion/stuff packs you have and whether you've checked for conflicts with Delphy's Dashboard. **

How long will it take to update for a patch????

Well, that depends. Ideally a new version will be out the next day, but if EA has added significant new features or changes to CAS tattoo or clothing and/or the Plan Outfit and Stylist options it will take longer as I have to update and test my code. Also I'm not always aware that a new patch has come out (despite doing a lot of modding, I don't play the game every day) so it's not a bad idea to post in the thread to tell me. However, if there are five posts above yours telling me, it's really not necessary to add another one.

All previous versions of XCAS and Extras have been moved to a new location: XCAS Obsolete Versions page

The labels are translated into German, Spanish, French, Brazilian Portuguese, Dutch, Finnish, and Danish. If you'd like to give me more translations for the tattoo locations above and for Naked or Nude, please post them and I'll add them to the package when I update.

Additional Credits: S3PE by Peter Jones - an incredibly versatile and helpful tool
Postal by Echo - still my choice for exploring game packages
BailaBaila99 for "Core Modding! (For complete and total nincompoops, like me!)" without which I'd still be wondering how the heck to do this
Elmar2000 for converting the Ambitions tattoos for teens
Everyone in the CAS Parts forum for feedback, suggestions, and being guinea pigs
Elmar2000, Anubis360, Silverfox, Maaay, Impatient Cow, PuffyAmi, and Mother Sim for translations.

See: Game Help:TS3 CC Basicswiki for a full guide!
Back to download view
1665 Comments / Replies (Who?)