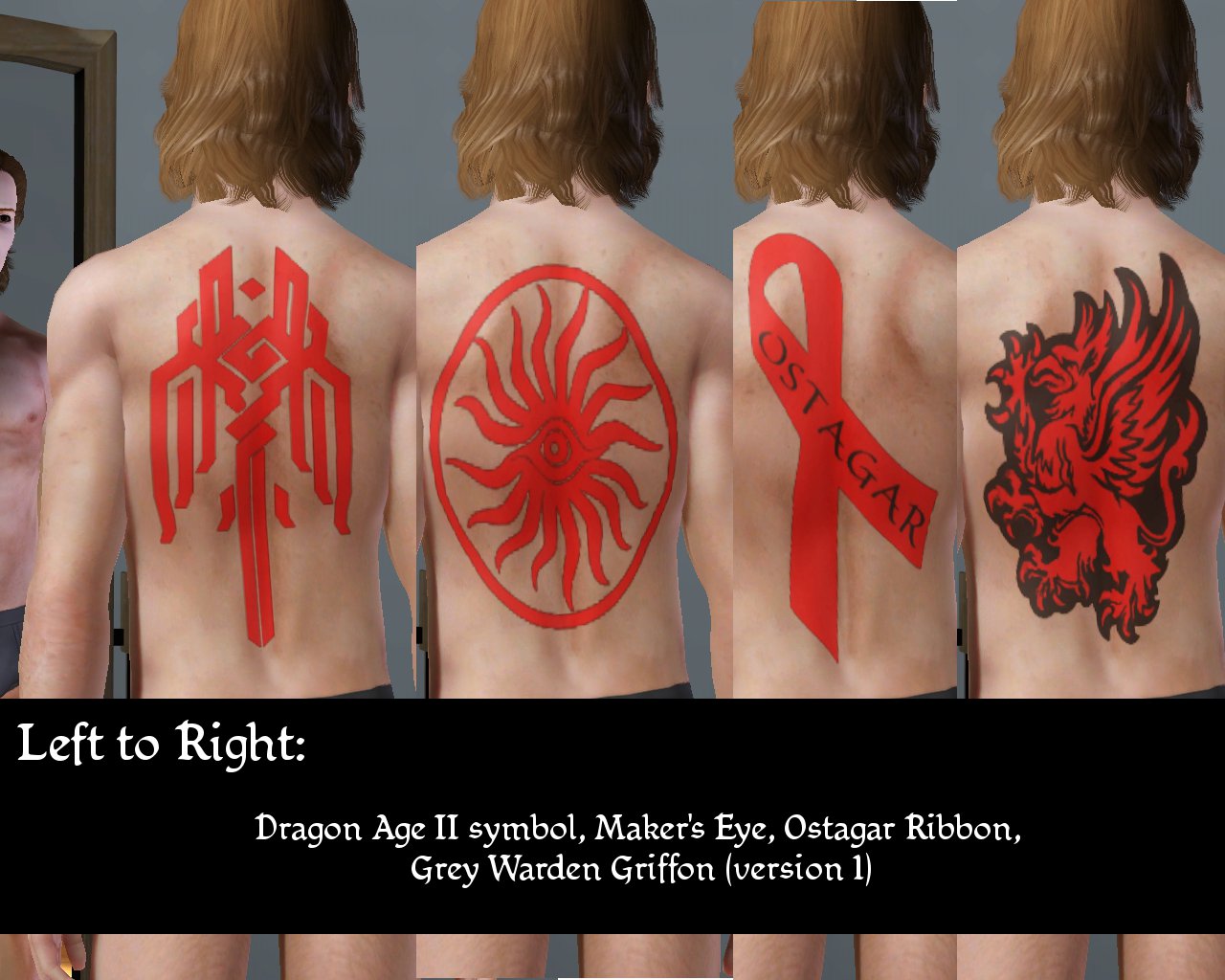 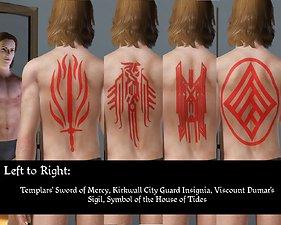 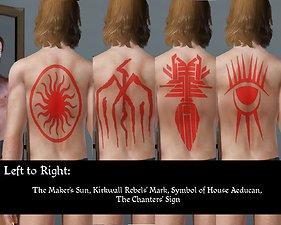 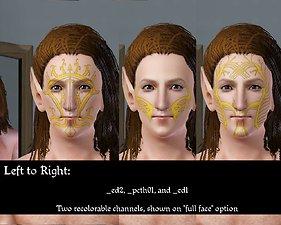 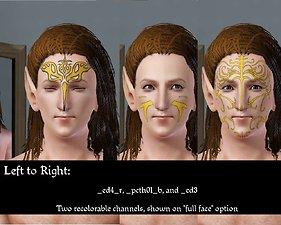 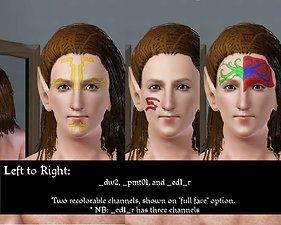 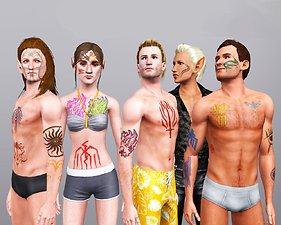 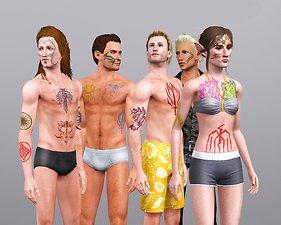 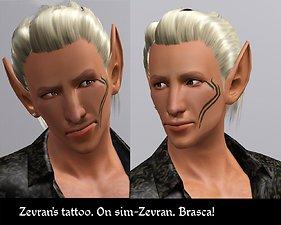 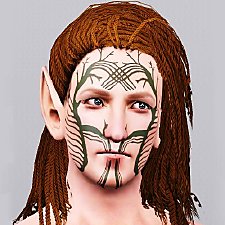 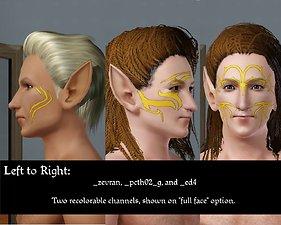 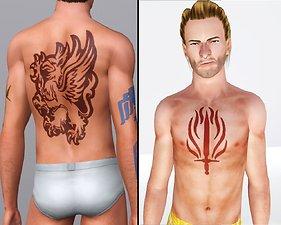 612 Thanks  Thanks     210 Favourited
Picked Upload! This is a picked upload! It showcases some of the best talent and creativity available on MTS and in the community.
I am a big Dragon Age fan, and I've found that quite a few other simmers are too, so I hope some of you will like this pack of DA:O & DA2-themed tattoos. Even if you've never played a Bioware game in your life, several of them still work well as generic "tribal" designs.

There are two parts to this pack: 13 designs that are meant to be used as body tattoos, for vanilla EA tattoo placement, and 12 face tattoos that are designed for use with Cmar's expanded tattoo placement mod. If you do not use Cmar's mod (available either here at MTS or as part of Twallan's Master Controller), you will not be able to use the face tattoos on your sims' faces, but they will work as body tattoos.

They may look a little odd (though a couple of the face tattoos do work really well as "tribal" style tramp stamps or armpieces), but the choice is up to you.

These 13 designs are all factional symbols - Viscount Dumar's house seal from DA2, the Kirkwall Rebels' mark, the Templars' sword of mercy etc. - and I was able to use them thanks to the awesome Nerdfitti.com. The images I used were converted from the pics of fan art decals offered on their site (no copyright infringement intended by either me or Nerdfitti, yadda yadda), and without the painstaking process of vectoring images from the games themselves already having been done for me, I wouldn't have been able to finish this project. So, yay.

The symbols are all quite blocky, bold designs, so look good at large or small sizes, and each tattoo has at least two recolourable channels, so you can have striking single colours, or go for a little bit of contrast, although colour effects will be quite subtle, as mostly the secondary channels are very thin outlines. Full CAS previews in the screenshots of all the symbol tattoos, except version 2 of the Grey Warden griffon, which is exactly the same as version 1, but is a single-channel outline. Here's an in-game pic of that second version, also demonstrating that you should probably be careful which sims you apply these tattoos to. My sim-Anders was pretty unimpressed at being made to model the mark of the Templar Order: 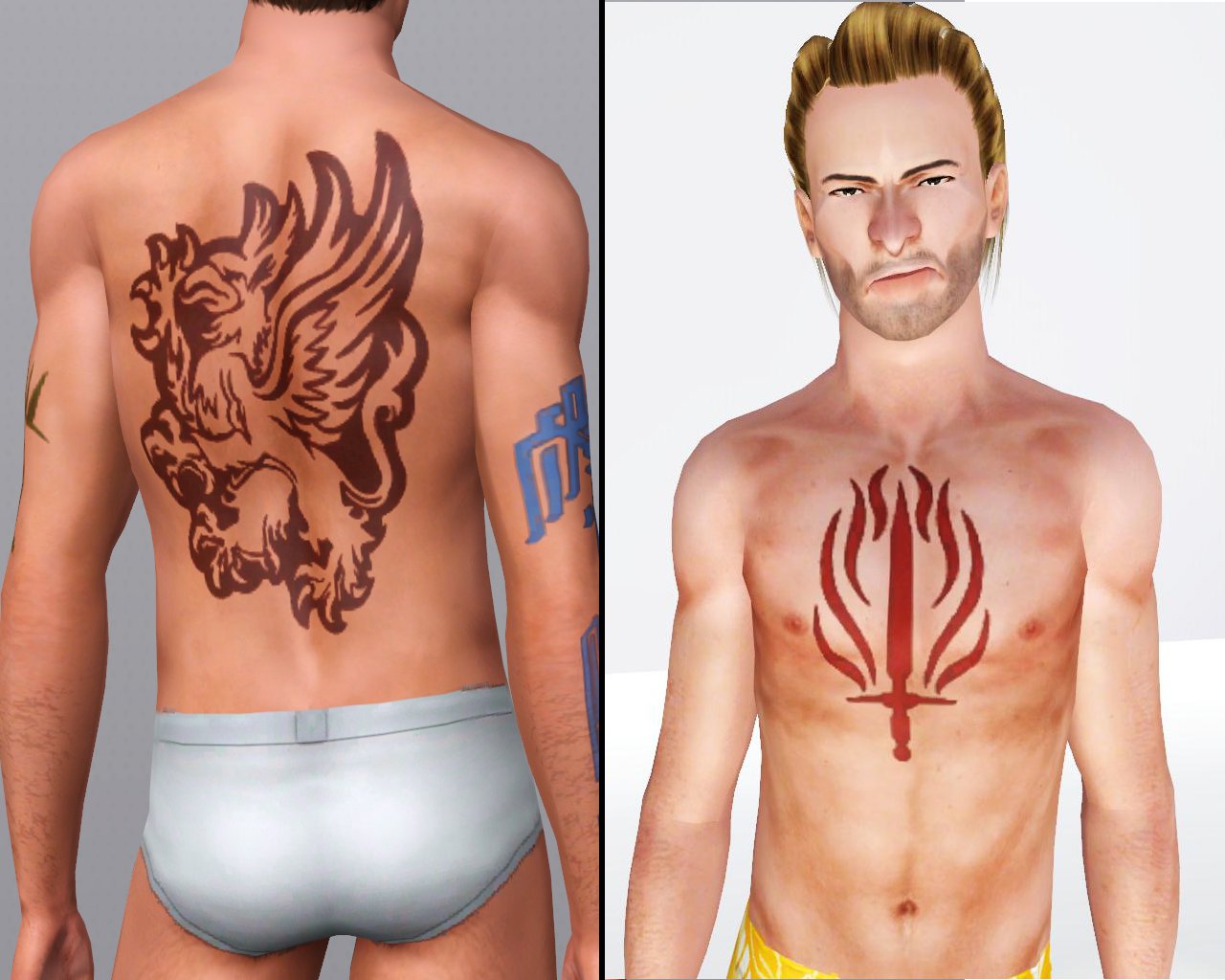 I also converted 12 facial tattoos direct from the Dragon Age: Origins game files. This was an, um, interesting process, as I ended up having to trace every single tattoo from the dds files by hand in order to resize them, fine up the linework, and prepare them for conversion. I am definitely not a great line artist, but I think the results are surprisingly good and, given the fact that facial tattoos will always distort slightly on your sims, no matter what, they seem to work well.

Obviously, all my screenshots were taken using Cmar's placement mod, but I should mention that all the facial tattoos are designed to be applied using the 'full face' option, at between two-thirds and maximum scale. Also, if, like me, you use a lot of facial sliders when making your sims, you may need to fiddle with physiognomy to make sure the designs sit well. Very sharp or wide cheekbones, for example, will cause mild distortion.

I didn't include every possible facial tattoo from DA:O, as some of them just didn't look good when converted, or lost too much detail in the process. I did, however, extract some of the alternative designs from each preset (the DA:O tattoo masks are, if you've never poked around in the game files, organised with different designs on each channel), so the naming conventions I've used follow the toolset names as far as possible. I know that's a little confusing for people unfamiliar with the Dragon Age Toolset, but, for example, _ed4_r is extracted from the red channel of preset _ed4. For a list of which designs are which in the DA:O character creator files, you can check out DarthParametric's list on the Bioware forums.

In-game pics show the sim version of my favourite Tabris sporting both versions of the Grey Warden griffon, the Kirkwall rebels' mark, and the Ostagar remembrance ribbon... 'cuz she was there, man. And she saw things. And stuff.

Normally, I would have been very anal about adding a version of the Ostagar ribbon with Simlish text, because I hate seeing English in my game. However, I decided not to as, unless you have the tattoo at a huge size, the text is not legible anyway. It also has three recolourable channels, so you can easily make the text the same colour, and it won't show (unless you are using very, very light colours. You get a small shadow then.). This also makes this tattoo quite useful if you'd like your sims to sport awareness tattoos for any symbolic colour of your choice. Or something. 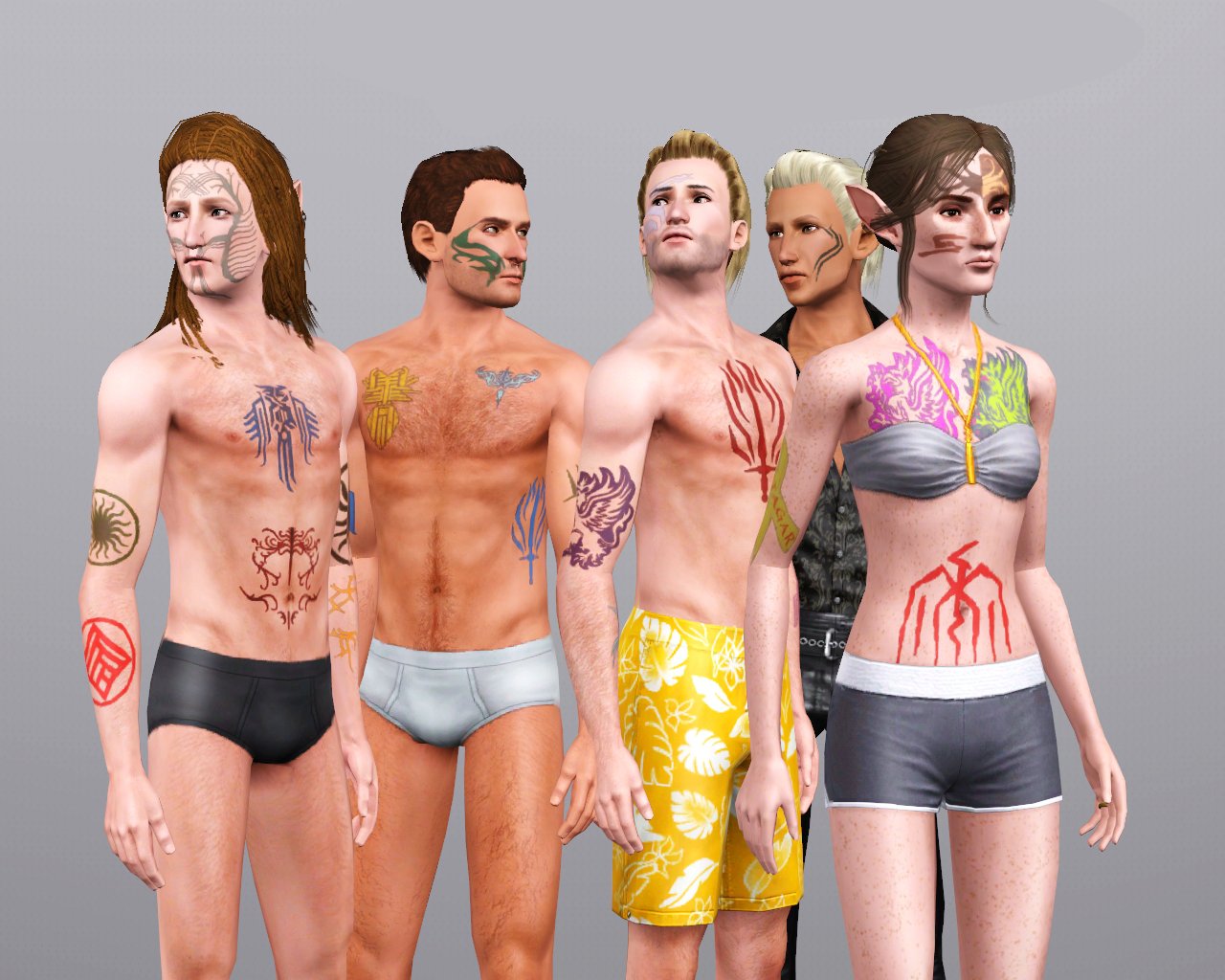 That's it! Thanks for looking. The only thing left to add is that - before anyone mentions Fenris' lyrium brands from DA2 - I haven't had any luck getting them to align as a full body tattoo so no, that's not something I'll be planning to make available any time soon.

Pointed ear sliders by Cmar. Freckled skintone by jmtmom. All other skins are Wild, V.2 by Navetsea. Male body hair by TummyZa and eyes are default Pixie by stefizzi. Male stubble is a default replacement by robokitty, who is also responsible for the lovely eye baggage make-up.

Straight male hair is -Look at that hair!- by v-ware. Hair on my m!Hawke (second from left) is AlfredAskew's Backswept Short Curly Hair Converted! by collin2, and the braided hair is this lovely gender conversion of the Modern Braid from the Africa Inspirations store set, converted by omegastarr82. The jaw-length male hair in CAS previews is from Generations. Female hair is Can't Care Hair from the Store.

All clothing is basegame, except the halterneck bikini top, which I think is Late Night, and Zevran's slinky leather trousers, which are by aikea. All sims by me, based either on DA:O or DA2 characters, or OCs of mine from my multitudinous amounts of fanfic. I regret nothing, I tell you. NOTHING.


Additional Credits:
Cmar, for the Tattooinator, and her invaluable tutorials.
Nerdfitti.com, for the vector images used to make some of these tattoos, DarthParametric and TypoWolf (Whuffie) for assorted tutorials and explanations, and Bioware, for making the game that ate many weeks of my life, and made me write so much fic about elves, mud, and ill-fitting boots.

If you need more info, see:
Back to download view
44 Comments / Replies (Who?)