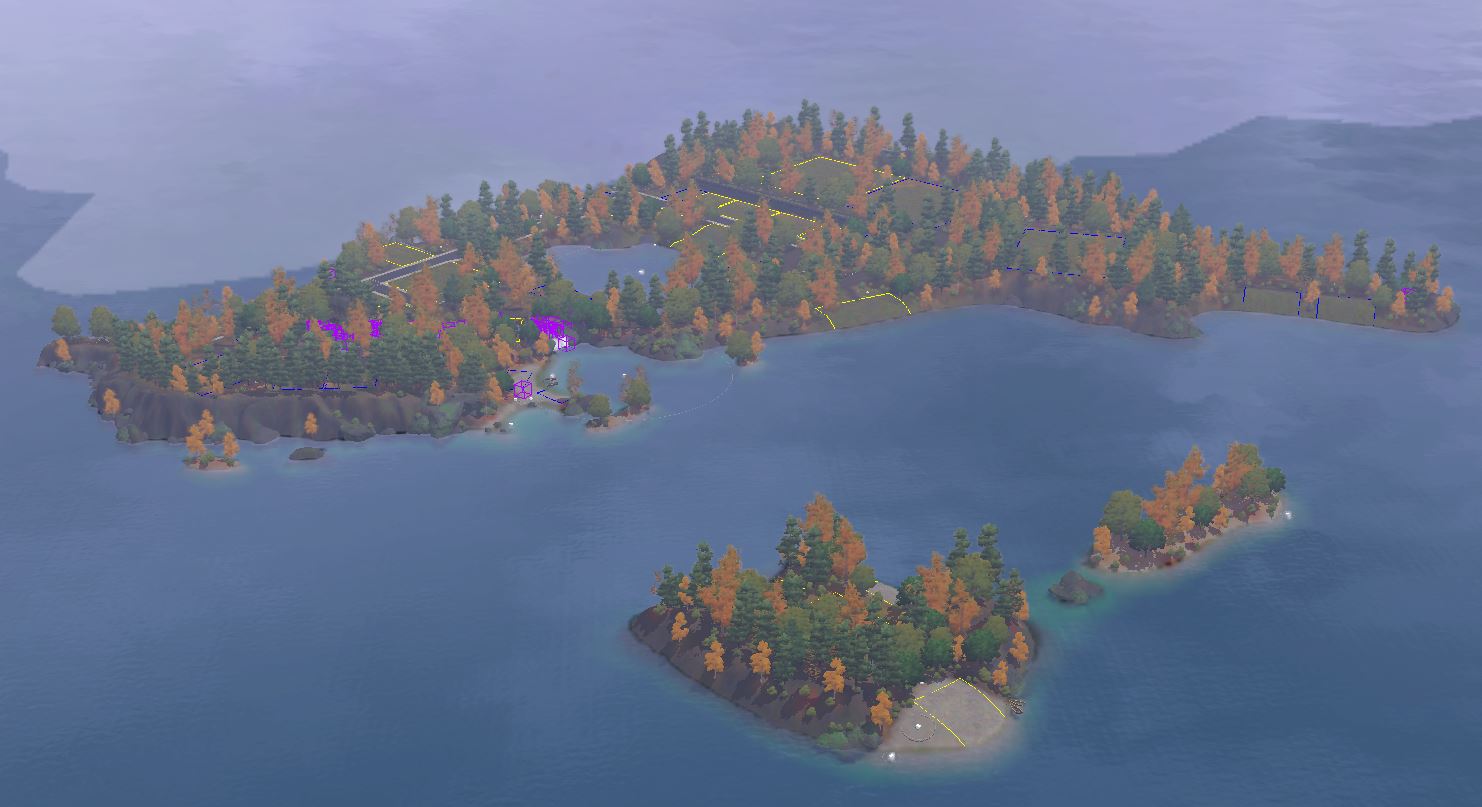 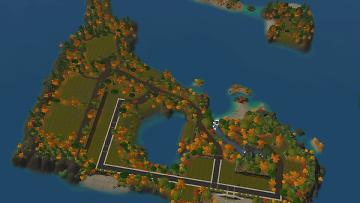 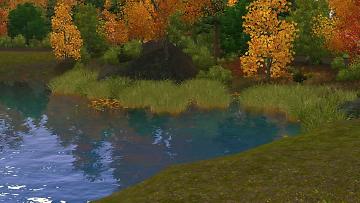 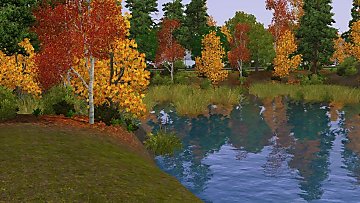 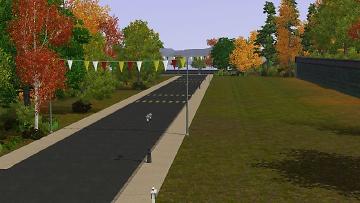 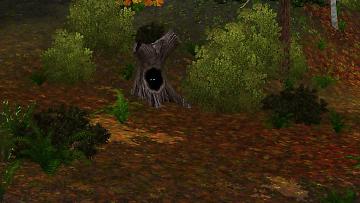 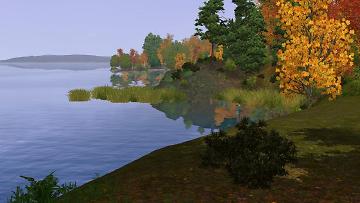 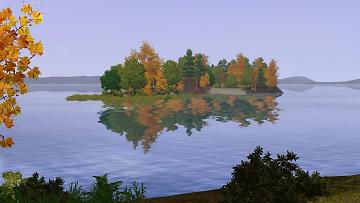 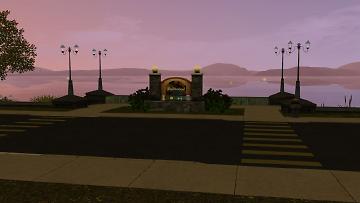 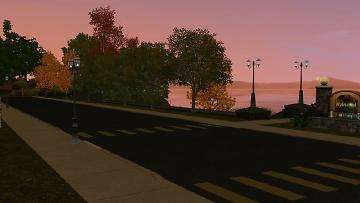 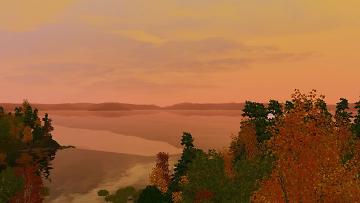 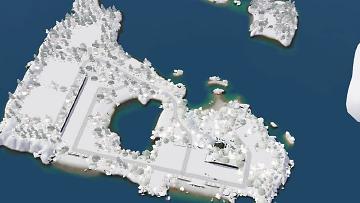 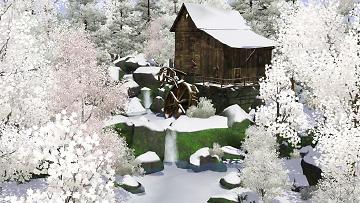 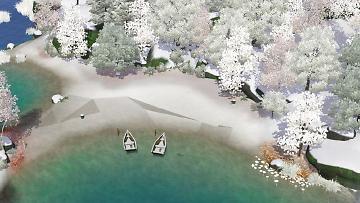 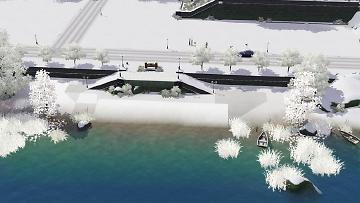 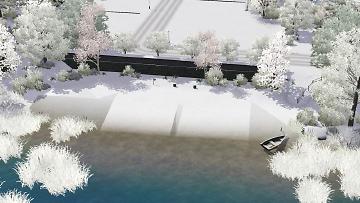 This is my first upload and I hope, I've done it correctly.
(*edit: nope, I have not xD Third times it had to be checked. I would've already lost my head if it wasn't glued to my neck^^).

I have been falling in love with Nilxis world Hylewood:

But soon I realised, that the tiny map is too tiny for my needs. So in CAW I decided to export Hylewood to a small map.
You can read about the CAW-Torture here, if you want to know how I managed to make it working ->
http://modthesims.info/showthread.php?t=625268
Maybe it helps for your project, too.
I thought about whether I should share it or not, because I don't wanna "steal" anything from someone. It's important to me, that it's clear that this world was originally made by Nilxis, it functions as a base for my edit and he kindly allowed me to upload my expanded version here on MTS.
You DON'T need Nilxis original world to play in any of my versions and in fact it conflicts with his original Hylewood!
(As I think about it now... because I used a new map (see Technical Info) , it probably won't conflict with the original world, but I haven't tested it^^ dammit. why is this stuff so complicated xD)

In the end I came to the conclusion, that I'd love to give something to you nice people back.
So... thanks to all dear creators, builders, modders and meshers, to all who just read, clicking the thank-you-buttons, to those who help people find stuff or help with caw/ingame problems <3
But enough blahblah for now - I am sure, you want to check out the world ^^

I used a bit custom content which is NOT included (but also not necessarily required).
1) I used Grande Lamas CAW Sidewalk Curbs. I recommend downloading them if you want to play either in the Full-Version or the No-IP-Version (see below: which file to download). You can get them here: http://grandelama.tumblr.com/post/1...e-about-curbs-a

They are not required

If you do not download them, they just won't show up in game - that will cause NO (routing) problems and it won't look odd - or let's say it will look more EA-ish^^
2) The original Hylewood comes with a lot if Nilxis' specifically for this world created Plant-Recolors. I kept most of them, but replaced his Boxwood Recolor with one of Sweetdevil Sims' Recolors (Dark Withered) : https://sweetdevil-sims.tumblr.com/...ficult-when-you
You do NOT have to download it from her page, I have asked her if she's fine with me including the recolor and it's alright - so it's already included
3) This is just a recommendation: Originally Nilxis Lighting Mod for Hylewood is included in his world. But when you export a world from CAW all the weather files disappear and I decided to not put them back in case someone wants to use another Lighting Mod. If you want to give Nilxis Hylewood Lighting Mod a try - which I totally recommend, because it fits the world perfectly - you can download it here :
http://nilxis.tumblr.com/cawresources
There are listed some Weather Files for different worlds - but there is written Hylewood on one, you can't miss it. Just click on it! I recommend putting the package file in your override folder. (You can ignore the other files, it's just the package file you need.)

Finally - What Do You Get:
You can download 1 of 3 versions (or all, if you want ^^) of a nice and cute autumn-y world, which is on a Small Map.

But you can only have one world at a time in the game, not all at once

42 lots in total - if you download the No-Diving-Spot-Version then 41 lots. 19 (+Diving Spot) community lots and 22 residential. But you can change that as you wish, because those lots are NOT filled. This world comes EMPTY.
The lot sizes are sometimes very odd - I wanted to use every bit^^
There is one lot (18. Old Bridge - 8x28) which leads over the small river. I have built a bridge for this lot, if you like you can look at the pictures and download it in the first comment (:

Choose only ONE version at a time. You cannot have all of them at the same time in your game

Full Version : - One Diving Spot PLUS the caw layer for the curbs (Grande Lamas CAW Curbs are

No IP : - NO Diving Spot and NO Shell Spawners, BUT the caw layer for the curbs is still there (Grande Lamas CAW Curbs are

Lite Version : NO Diving Spot, NO Shell Spawners and I deleted the curb layer

That means, if you download this version, the curbs won't show up, although you might have Grande Lamas CAW Curbs installed

I made a Pack and a Package version of each world-version, choose one

Originally Nilxis used 16 terrain paint layers, I think... Because I had to import everything to a new map, I had to remake the paint layers. There are now 15 in total. And as the original Hylewood there are more than 8 paints per chunk. But I have had no problems, when I tested in game. When I first started Sims 3, the loading time was between 15 and 30 seconds. When I reloaded from Main Menu, it took 2 to 5 seconds^^
I also had to remake all the roads and I was able to export most of the original Hylewood textures, but I used the original EA sidewalk instead of Nilxis'.

There is a huuuuuge amount of plants (over 9300), but I took care that they are all in one layer! I took also care of the global layer being empty! I don't know how well it will run on a not-so-good-computer because of all the trees. But it's a small world and I spend 3 days doing the routing as good as possible. So hopefully everthing is fine ^^

I placed some additional effects (fireflies 5x, cat eyes 2x) and Nilxis already had a bunch of river/waterfall effects and some geese/bird effects in that world.

For me, I like it to explore Spawn Points in new worlds on my own, but if someone if interested which Spawner is where to find just leave a comment and I will work out a map

Just like Nilxis original world - without them the world might be even unplayable. IP is just for the diving lot - and shell spawners - required. If you download the Lite Version, you do NOT need Island Paradies.

About the Routing:
Because there are a lot of plants, I had to be really careful so no sim/pet will get stuck between them. But there are many paths between all those trees/plants, so sims will find a way through the jungle^^ In general sims cannot walk on the hills which are surrounding the island and in really dense vegetation and they can't walk on some small islands.
If you don't want your sims to use water taxis or route/spawn on the smaller island with the 4 lots, just set them to "visitors not allowed".
I painted No-Camera-Routing in the edges of the map so the camera should not get "stuck" there.

Known Issues:
There is only one issue I know of: The snow texture looks on the beach lots really ugly (screenshots). I tried a lot of different things to make it work, but either I made it worse, or it just didn't improve. But I saw this issue also in original EA worlds... what a shame, it's really sad that beach lots break the snow texture ):
Edit 17.04. : I forgot to mention, that you still can see the distant terrain patch - like in the original hylewood. Personally i don't care and it isn't bad for gameplay^^


If there are questions or if you want to say something, just leave a comment

Additional Credits:
Last but not least:

A huge Thank You to Nilxis, who created this masterpiece in the first place, who was so kind and shared his CAW files. Without him my edit wouldn't have been possible - obviously^^ And he encouraged me to share it with you!

Another special thank you to Sweetdevil Sims for creating those nice boxwood recolors and allowing me to share it with all of you.

And thank you to Grande Lama for his curbs - they are so cool. Those stupid roads don't look flat anymore^^

AND thank you again, fellow simmers (and not simmers^^). For just being here and trying to be a decent human being!

Edit 17.04.: Thank You to the moderators who were so kind and patient with me <3


...well, okay... and thank you EA for sims 3... which does not run properly without mods... but hey, thanks non the less^^
Other Information