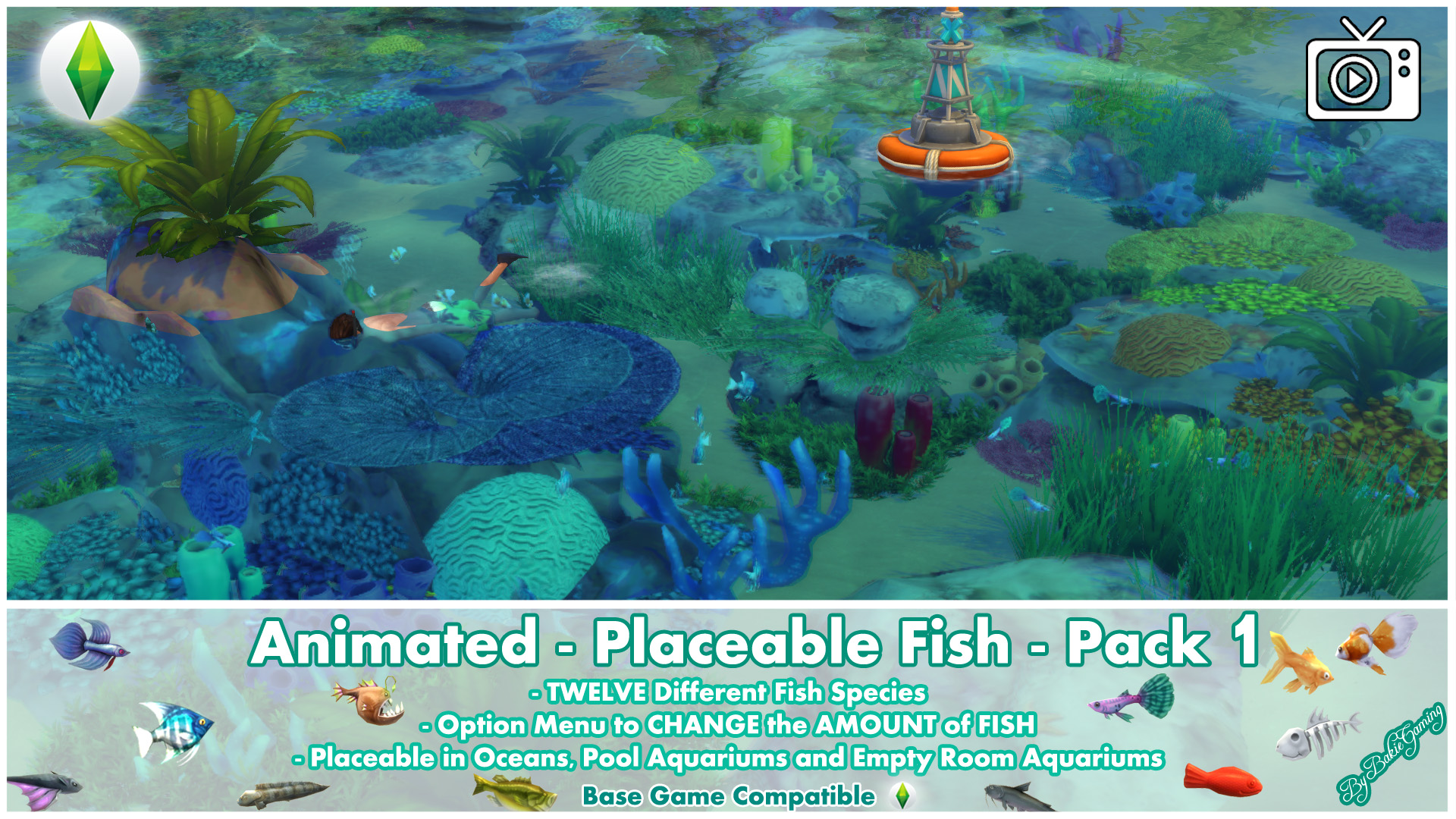 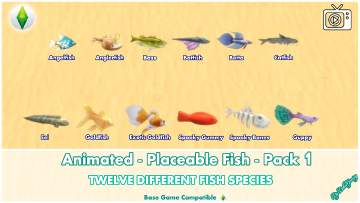 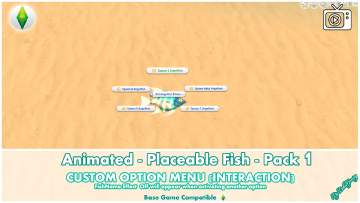 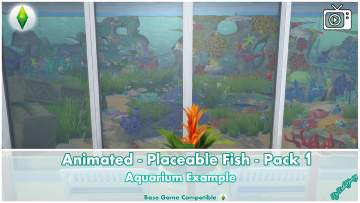 339 Thanks  Thanks     61 Favourited
This is a new mesh, and means that it's a brand new self contained object that usually does not require a specific Expansion pack (although this is possible depending on the type). It may have Recolours hosted on MTS - check below the description for more information. Animated - Placeable Fish - Pack 1
Something my oceans and aquariums were still missing, were some small fish to add more life to these areas.
So that's why I proudly present to you, my first Animated Placeable Fish Pack!

For all of these objects counts that by using a custom option menu (Interaction), you can change the default amount of 3 fish to either 1 fish, 1 baby fish, 5 fish, 8 fish or no fish at all.
The setting for spawning no fish at all can be useful if your game starts to lag during video recording, but you don't want to delete all carefully placed objects. Disabling just a few can already do a lot about the lagging.
When leaving your lot or the entire game, all objects will reset to spawning 3 fish again. This makes it easier to find them back then seeing none or just one.

As for the objects spawning the fish effects, all will have two swatches to choose from. The first one will be a floor decal showing the particular fish that will be spawned after placing the object.
The second swatch will make the object to become invisible.
When placing these objects in the ocean, they will become invisible all by itself and the interactions will still work when hovering your mouse over them.
Placing these objects in Pool Aquariums only makes the objects to become invisible when looking from above the water surface or looking from behind glass. Using the Option Menu isn't possible inside of the Pool Aquarium as the game thinks you want your Sim to go swim to that spot. There fore, activate the desired amount of fish outside of the pool, before placing it in!
The invisible objects (second swatch) are especially useful if you made an Empty Room Aquarium as then the floor decal will behave like normal objects do in a room and thus won't become invisible.
Examples of all the things mentioned above and more, can be seen in my video for which you can find a video-link right underneath the image at the top.

Object information:
These mods are Base Game Compatible.
They're standalone objects, so won't override any other objects in game.
To easily find all objects at once, type "Animated Fish" into the search bar and after that click the Search tag above the results so all of them will appear in the catalog.
All of them can be found in Build's mode Pool's decoration section.
You can recognize them by my "BakieGaming" icon in the lower right corner of the thumbnail.
The cost are: 2 Simoleons each

I hope you like this FIRST Animated Placeable Fish Pack and if you do, please leave a comment!
If you want to use it in screenshots or videos, be sure to give me some credit!

Additional Credits:
A Big shout out to ICEMUNMUN for helping me getting the Custom Option Menu to work as it should!
Thanks to the Sims 4 Studio
Thanks Adobe for making Photoshop

I have also made some other CC like Animated Objects/Walls/Floors/Animals, Invisible Dance Floors, Pool Water Recolors, Backdrop Replacements, (Dynamic Light) Objects & Clothing, Unlocked Item Packs and more! To see and or download them, please take a look at my profile page: http://modthesims.info/member.php?u=3751119