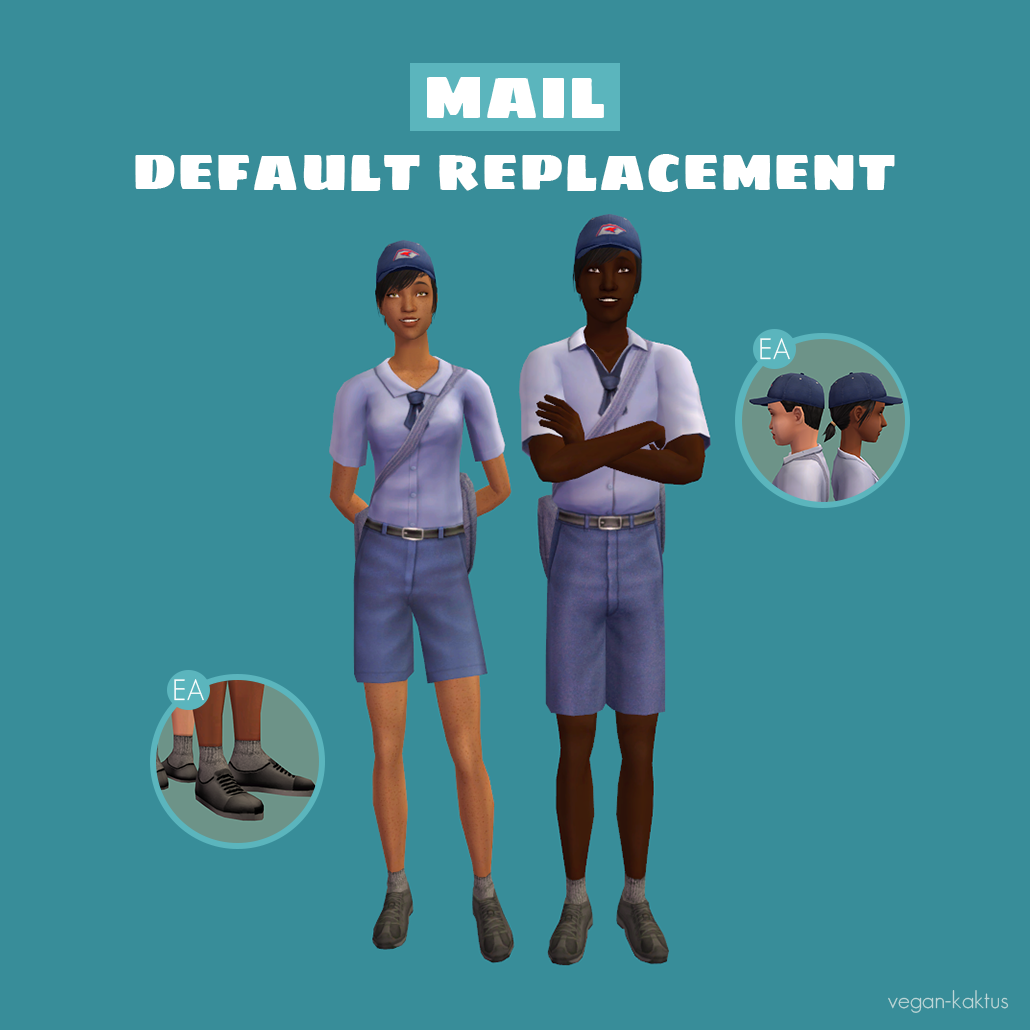 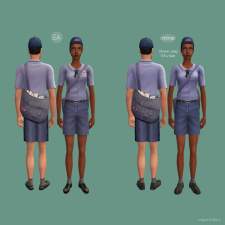 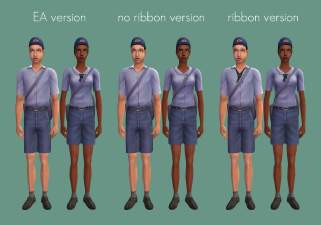 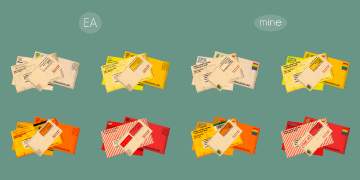 61 Thanks  Thanks     11 Favourited
I'm back with another default! This time it's for the mail delivery, and just like with my newspaper delivery defaults I have changed and fixed things in here as well. I'll do my best to explain everything.

EA did a much better job with this clothing than with the newspaper delivery's outfit, I'll give them that. But once again; what was EA thinking when choosing shoes?? They are awful. Not anymore though! I shoeswapped afbodymaildelivery and ambodymaildelivery with MDP's 4t2 shoes from here (recolored black by me) but with EA's socks.


NPC Clothing
*In other words, you can choose if you want the ribbon or not.


NPC Hair
Included in the download is an optional hair default for afhairhatballcapnpc and amhairhatballcapnpc by me (replacing the hair for the mail delivery only). It's a mashup (meshup? :p) of EA's pixie hair and EA's NPC cap. The male pixie hair is a conversion by Andie, and the cap on the male mesh is fansleelamb's fixed male mesh. Andie's TOU is to not restribute their meshes, but they haven't been active since 2011 so I'm just going to cross my fingers and hope that they won't haunt me down for this hahah. I had to get rid of the hair animation though, since it behaved really weird when I didn't. I don't have the motivation to dig into this problem deeper, so no animated hair it is. Sorry!

Unfortunately, you have to have university for my hair DR to work (I believe?). I extracted the resources from University, since I couldn't get the hair default to work with the ones extracted from basegame (plus, de GPZS looked very different in those, and I wasn't sure on how to edit them properly). I'm not sure though, as the files seems to have the same numbers, instances etc. So if anyone of you doesn't have University, please try out my hair mesh replacement and let me know if it works! And if it doesn't, anyone who wants to make it BG-compatible is more than welcome to do so, or if you know how I can make it myself I would be more than happy to learn from you.

This means that if you have any texture default replacement for afhairpixie, my repositoried (aka my Freetime/OFB files) default will pick up that. I've made + listed some afhairpixie texture defaults here which are compatible with my mesh replacement. The ones I used in my preview here is deedee-sims recolors on shinasims' alpha edit, which you can find in the link linked. Since my custom version is not referenced to EA's textures, you will have to swap textures in SimPE yourself if you wish to use any other textures than EA's or shinasims' alpha edit of EA's textures (which are the custom versions I've included). If you don't use SimPE and would like to get help with swapping textures, let me know! I'll be more than happy to help you.

The female mesh pixie hair unfortunately has some small transparency issues in certain angles (which is weird, since EA's original doesn't have that). If anyone would like to try and fix it, you're more than welcome to try and do so!


Bills Texture
Included in the download is also an optional, improved default replacement for the bills! Textures defaulted are:
The textures are still the same size (512x256) but I re-wrote most of the text to make it less blurry (more like, smashed random keys on my keyboard lmao). I've also replaced the stamps with colorful pictures. Some years ago, in Sweden we had pride stamps and I really liked those, so I thought it would be nice to have them here as well! I'm not part of the LGBTQ+ community (or at least, I don't think so. But I mean, Bae Doona has tbh got me questioning my sexuality, not gonna lie) so I hope I don't offend anyone by using it here. I totally support the LGBTQ+ community! Therefore I hope this comes accross as me being an ally, not "using" the flag or anything :-)

itsdiamondeyesuniverse has a mod here which randomizes the mail delivery's hair (+ others) and there are two bills mod here and here, which migh be of interest to you. None of these are required for my default, but they are compatible!

As usual, if you have any default(s) in your downloads folder defaulting the same thing as any of my defaults, you have to remove those before installing mine. Hopefully the anon who sent me this sweet ask to my tumblr a month ago sees this, and I hope you like this as well! :-)

All files have been compressed to reduce file size. Let me know if you stumble upon any problems, or if I messed up anywhere.


Credits:
mdpthatsme for the shoes, fanseelamb for their improved male cap mesh, Andie for the ftm pixie hair, hafiseazale for their preview of the Bella statue I edited a bit and used as a stamp, iconfinder for the leaf icon and pngio for the blue crown icon.

I think that's all? Happy simming!