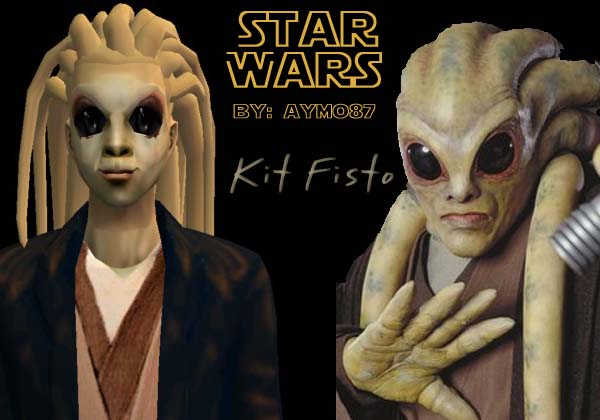 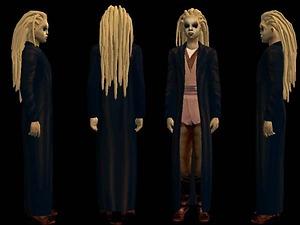 sorry...Kit was suppose to get uploaded with Aayla but cus of the stupid pet-bodyshop it uploaded the original mesh with it...which as we all know is a "no-no"...and of course that was the time my computer decided to go to Poopsville so I had to get it fixed before I could get him re-uploaded...so now without further delay:

Kit Fisto was a renowned male Nautolan Jedi Master in the waning years of the Galactic Republic. During the Clone Wars, he served as a High Jedi General in the Grand Army of the Republic, as well as a member of the Jedi High Council.

You probably know him from his part in the battle of Geonosis in AOTC, as well as when he was killed by the Emperor at the end of ROTS.

I KNOW he's not perfect...Nautolans are only suppose to have 14 tenticles and he's got more

but that's cus I cant mesh. So I'm working with what I got, and his eyes are a little rough, but that's cus well...it's hard to get a sims eyes to do that. So anywho...I hope you like him.

"hair"/tenticles by Compulsive D @ simpathetic.com
Alien Eyes by silo pixel & bean
Eyeshadow by Barcelonista
robes are a recolor of Marie_fay's FANTABULOUS Obi Wan's robes (recolored WITH permission) made to match Kit's robe colors
skin is my Nautolan recolor of my favorite skin byLouis