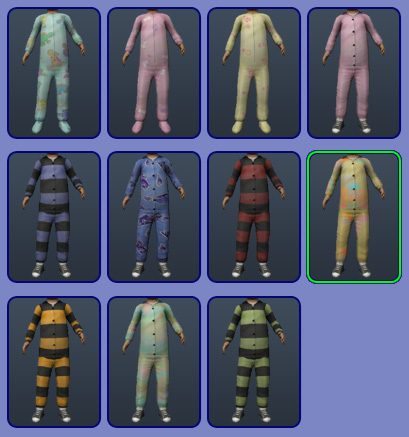 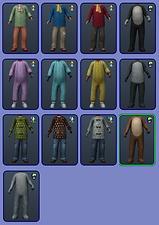 264 Thanks  Thanks     32 Favourited
Picked Upload! This is a picked upload! It showcases some of the best talent and creativity available on MTS and in the community.
This mod is no longer being updated. It has been completely overhauled and is now available here.

Update: Fixed a rare compatibility issue involving the base game clothes. If you have noticed anything weird with the base game clothes (about half of what was moved using this mod) please re-download the base game file. (Don't forget, each rar has DIFFERENT things in it, you need to download EACH one for EACH EP you have! They DON"T overlap!) - Aug. 28, 2007

After learning how to completely move Maxis clothing from one category to another, I went crazy and did it for ALL clothing that was bugging me because it didn't belong in that category.

This is what I use for MY game now. I will not be doing another version of it. However, I figured I could at least share with you all. For your convenience I have subdivided this mod into MANY TINY LITTLE PIECES. This was done for you, in case you didn't like were some clothes ended up. Please download each .rar files for each expansion that you have. If you download things that you don't have, the clothes will not show up magically, sorry. Yes, I know there isn't a Pets version, but that's because Pets did not add any new clothes. Or at least ones that I thought should be moved. Each .rar contains clothes divided by age and gender. That way, if you think a women's dress should have stayed in formal, then you can removed the file labeled afEPnameCatalogEdit.package and still reap the benefits of having your toddler clothing from that EP recategorized. I didn't go as far as making each article of clothing individual, because thats just a little extreme, don't you think?

I included screenshots of your toddler's clothing selection for pjs and outwear, cuz everybody likes to look at tot clothes.

Now, on to the nitty-gritty:

This game mod will clash with any other mod that does the same thing. The ones that I know about happen to be my Athleticwear Mod (don't worry, that one is included in this pack anyways) and prolly fanseelamb's Outerwear Mod. One exception. fanseelamb has a version that includes the OFB costumes in outerwear. I didn't touch those customs (except the toddler bear outfits) so you can do what you want with those. If you find that you don't like what I did to your catalog, remove what you didn't like. If you hated all of it, may I suggest the two links above as alternatives?

Installation Instructions:
Make a subfolder in the following location and put the files there instead of in your Downloads folder. C:\Program Files\EA GAMES\The Sims 2 Seasons\TSData\Res\Catalog\Bins (or whichever is your highest expansion pack folder).

You can put these files in your Downloads folder, but if you do, the delete button will be enabled in CAS and Body Shop. They will also not move the clothing and it will all be treated as custom content. Do NOT delete them in CAS or Body Shop. Doing so may corrupt some of your game files. To remove, delete the files themselves from the folder you put them into.


Additional Credits:
To fanseelamb for doing the Outerwear version that I based my Athleticwear version off of, and explaining to me a few of the reasons why it wouldn't work at first and explained how to make the file size smaller.