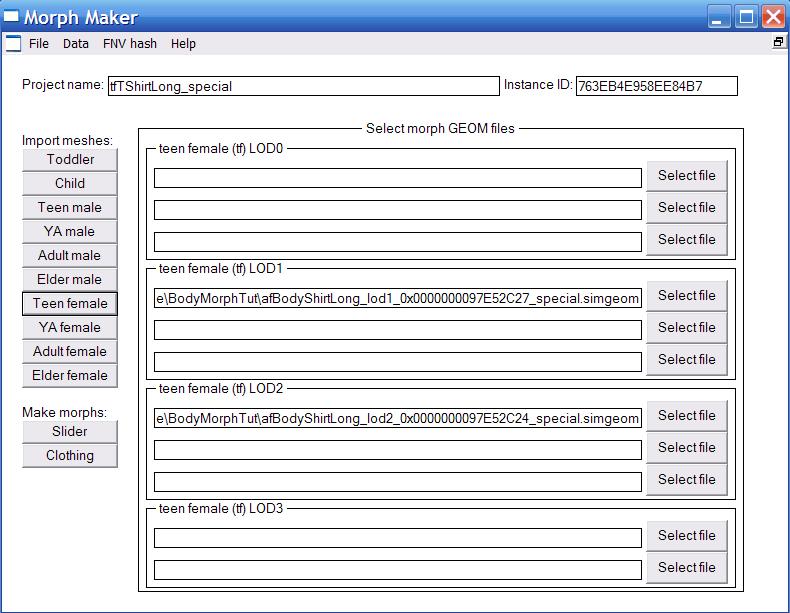 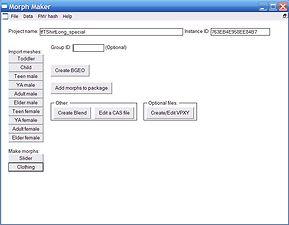 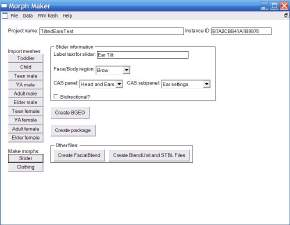 Created by CmarNYC
View Policy / About Me View all Downloads
Uploaded: 18th Jan 2010 at 7:56 PM
Updated: 27th Nov 2013 at 4:03 PM by Nysha
This program is a tool to make new morphs for body meshes and new CAS sliders for faces.

Accepts morph meshes and converts them to BGEO files containing the morph information.

Creates the necessary supporting files to use new morphs in the game.

Edits clothing packages to import the new morph and link it correctly.

Has help screens with brief instructions for the basic tasks.

What it does not do:

Does not create morph meshes. Use Milkshape with Wes Howe's plugins for that: Download here.

MorphMaker does not compress files when it adds them to packages. You can use S3PE to compress them later if you want, but it's not necessary.

I haven't tried morphing hair meshes - MorphMaker may handle them fine but that needs testing.

The morphs this program makes have been tested in all versions including World Adventures.

Please report any problems, but make sure you have your game set up properly and have other custom content working before telling me the morphs you made with this don't work. Also make sure you haven't reached the limit for sliders. (If you have TS3 1.8 or WA 2.3, use Jonha's slider limit mod available here, AwesomeMod, the Extended Game Core mod, or the adult Extended Game Core at SexySims2.)


Additional Credits:
Delphy and Wes Howe for their help, and for CTU (Delphy) and the Milkshape plugins (Wes).
Echo for Postal
P L Jones for S3PE Base1980, Rez Delnava, Alek, and everyone else who tested and gave feedback and suggestions.

** Updated 2/28/2010: No changes, but rebuilt with a new version of FTN95 Fortran with Windows 7 support. Note that both MorphMaker.exe and the supporting salflibc.dll must be replaced. Both are in the new download.


** 9/4/2012 Version 2.5 uploaded.
Fixes a major bug introduced in the last version that broke morph links from the CASP file when adding morphs and basically borked the whole package.

Where's a headdesk icon when you need it? There's also a new version of the supporting salflibc.dll platform which appears to significantly improve the file selection problems with Windows 7. As noted above, in the next few months I should have a new and much better version of this software.
Other Information