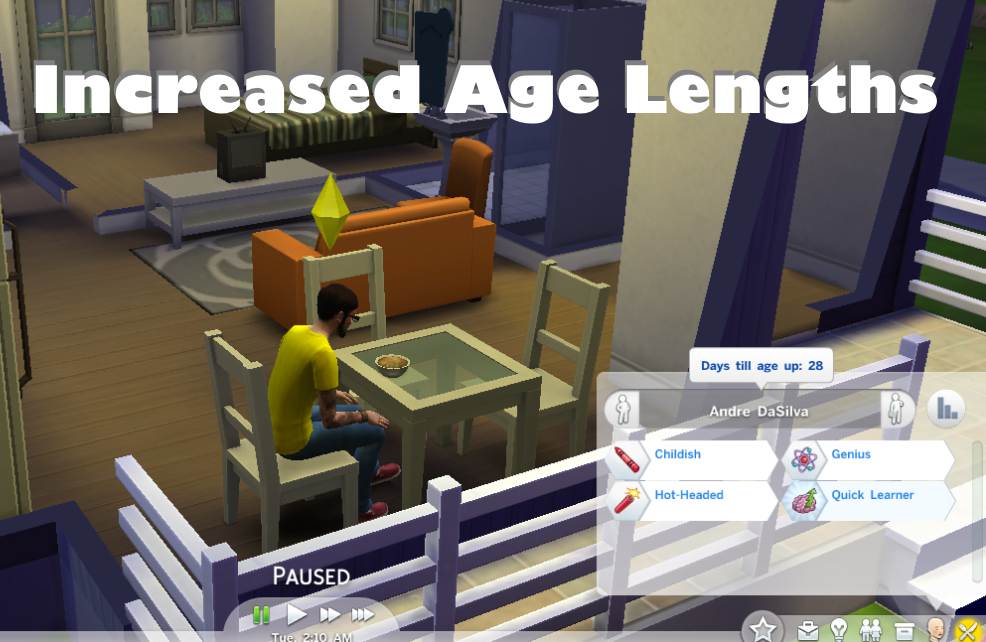 366 Thanks  Thanks     128 Favourited
V3 is now released! This version of the mod is designed to complement Deaderpool's Story Progression mod .

If you're anything like me and you play TS4 on the default lifespan, you're probably annoyed with the fact that your Sims just don't have enough time in their lives to accomplish everything. 20 days in the YA and Adult stages was far too little for me (and the Long lifespan setting was far too much) and, unless my Sims reproduced in their first week of being a YA, most of them died of old age before their grandchildren were even born.

I took a look in TS4's XML tuning to see what I could do about this. I discovered that EA's default length for the Elder stage was 10 days. That's by far the shortest life stage of them all.

This mod tweaks the lengths of all life stages, to make them flow in a more realistic manner and give your Sims more time to live their lives, without being rushed by EA's short default YA and Adult ages. As of V3 of this mod, I've been using Deaderpool's MC Command Centre mod, which triggers pregnancy/marriage among the townie population when they age up to Adults. As such, I've tweaked the age lengths with this in mind, so that these Sims can still have a chance to have grandchildren.

Assuming your Sim conceives a child on their first day of the Adult stage, they will be about a week away from Elder by the time their child is a Young Adult, which I find to be far more realistic than simply dying a few days later.

These tweaks work with the Fast and Long lifespan settings as well -- on the Fast setting, each of the above lengths is halved, while on Long they are doubled.

This mod is based on Game Version 1.0.732.20, but it should be compatible with all patch levels, as no changes have been made to the age lengths.

This mod edits the AgeTuning XML, and will conflict with any other mod that does the same. As most of the other aging mods out there are based on this same edit, they'll obviously conflict with this one.

Unzip the archive and place the .package file in your Electronic Arts/The Sims 4/Mods folder.

Need more information?
Back to download view
66 Comments / Replies (Who?)