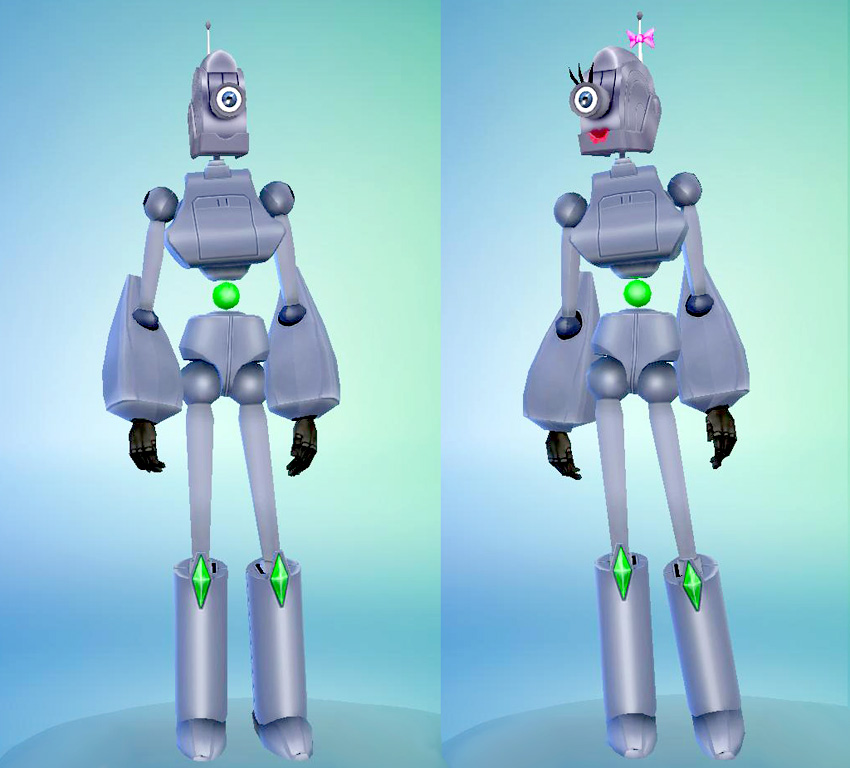 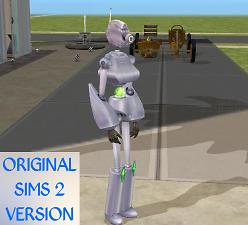 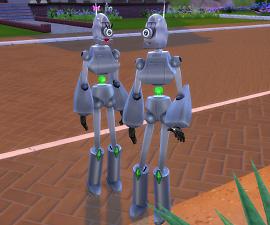 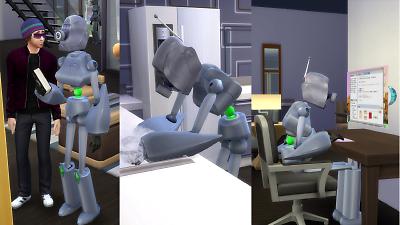 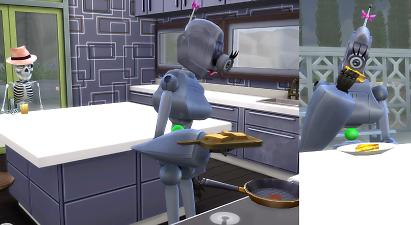 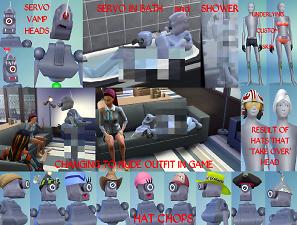 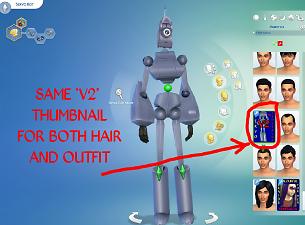 290 Thanks  Thanks     147 Favourited
Picked Upload! This is a picked upload! It showcases some of the best talent and creativity available on MTS and in the community.
Differences to the duplicate Servo conversion uploaded here a year after mine: The other one is much higher-poly than mine and has the body mesh categorised as Skin Detail (a category not intended for meshes) to make it stay on when nude, and uses that same high-poly mesh at all distances instead of using lower poly meshes when zoomed out as mine correctly does. This means that the other one can cause performance issues in game. Mine follows EA standards of lower-poly LODs for zooming out and of putting meshes in categories intended for meshes, so has no such issues. Mine is adapted for TS4 with a resized head to fit TS4 head-related animations, and hatchops so that it wears regular hats rather than only a custom accessory hat. My mesh doesn't morph with the sliders, because I vertex-painted mine black - it's that simple, no need to 'pick apart and study the bear costume' as stated in the other version. Mine has a modified voice to make it sound more 'robotic', the other one doesn't. The other one is an outfit rather than a readymade sim, so with theirs you have to create your own sim and figure it out yourself; mine just goes straight into a household from CAS, no extra work required.

***UPDATE JUNE 21 2018: Added new .zip file which enables the Servo parts for the Seasons patch's 'Cold Weather' and 'Hot Weather' categories. If you are installing this sim for the first time, please also download the 'Servo - Updated for Seasons' .zip file and let the three enclosed package files overwrite the three old ones that were in the original zip file. If you already have this sim, then just download the Updated zip and let the three packages inside it overwrite your old ones. Then go into Full Body outfits in the Cold and Hot Weather categories and click on the Servo V2 Null Body to make sure it's enabled, as that item is what provides the modified voice.

UPDATE NOVEMBER 2017: Still OK with this month's patch (for Cats & Dogs) which apparently messed up the arms on many custom clothing meshes/body meshes. This item is still working as normal.

MAJOR UPDATE MARCH 9 2016: Back in the early days of TS4, with the tools and the game still new, my original version of this sim lost its body in the bath and didn't have hatchops (a new and unfamiliar concept at the time). The hat issue turned out to be a problem when the game auto-switched the sim into a hat for a career or whatever, because the sim would change to a human head and sometimes a human body too. This V2 version fixes all that. Servo now retains its body when Nude and the hatchops let it wear hats on its robot head, which is fun. It also utilises the muffled/metallic voice effect found in some special CAS items so the voice sounds more 'robotic', and a custom specular for extra shine which wasn't possible when I first made this sim. The 4th pic below shows the updated features.

If you already have the old version of this sim, with .package files from 2014, and want to upgrade to the V2 version: Delete all its 2014 .package files, then copy the new ones to your Mods folder. Servo will then have a human appearance in-game, so you need to take it into CAS in-game with cas.fulleditmode and apply the underlying skin under Skin Detail, then apply the combined head & body mesh (under Hairs) for the Everyday category (which will then carry over to all categories, as Hair does), then apply the null body mesh (under Full Outfits) for every clothing category.

Following my TS3 conversion of Servo from TS2 a few years back, here's a conversion with some new features for TS4: hatchops (the ability to wear any hat, without it having to be a custom hat made just for Servo), and a modified voice to sound more robotic.

Servo comes in two versions, male and female, so I include two sims, a male Servo and a female version I've called 'Servette'. I gave them different aspirations so that one can be a cook, the other a gardener. (Please note that these are regular sims dressed in custom bodies - they aren't a different category such as service sim and are not 'modded' in any non-standard way.)

Below, both arrive in Oasis Springs: 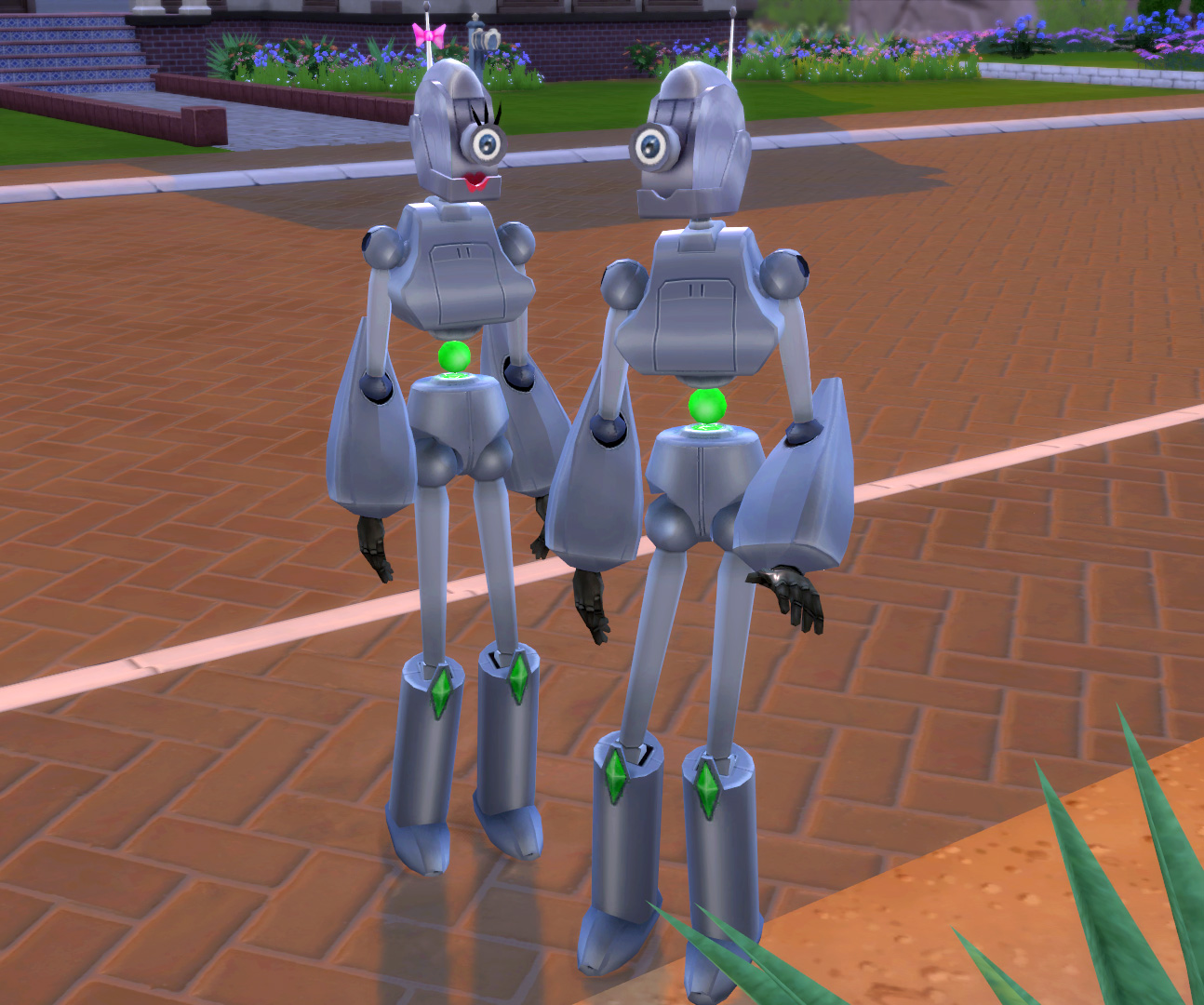 Having moved into their new home, Servo and 'Servette' get busy. Below, Servo puts books away, helps with the dishwashing, and then sits down to do some programming on the computer. 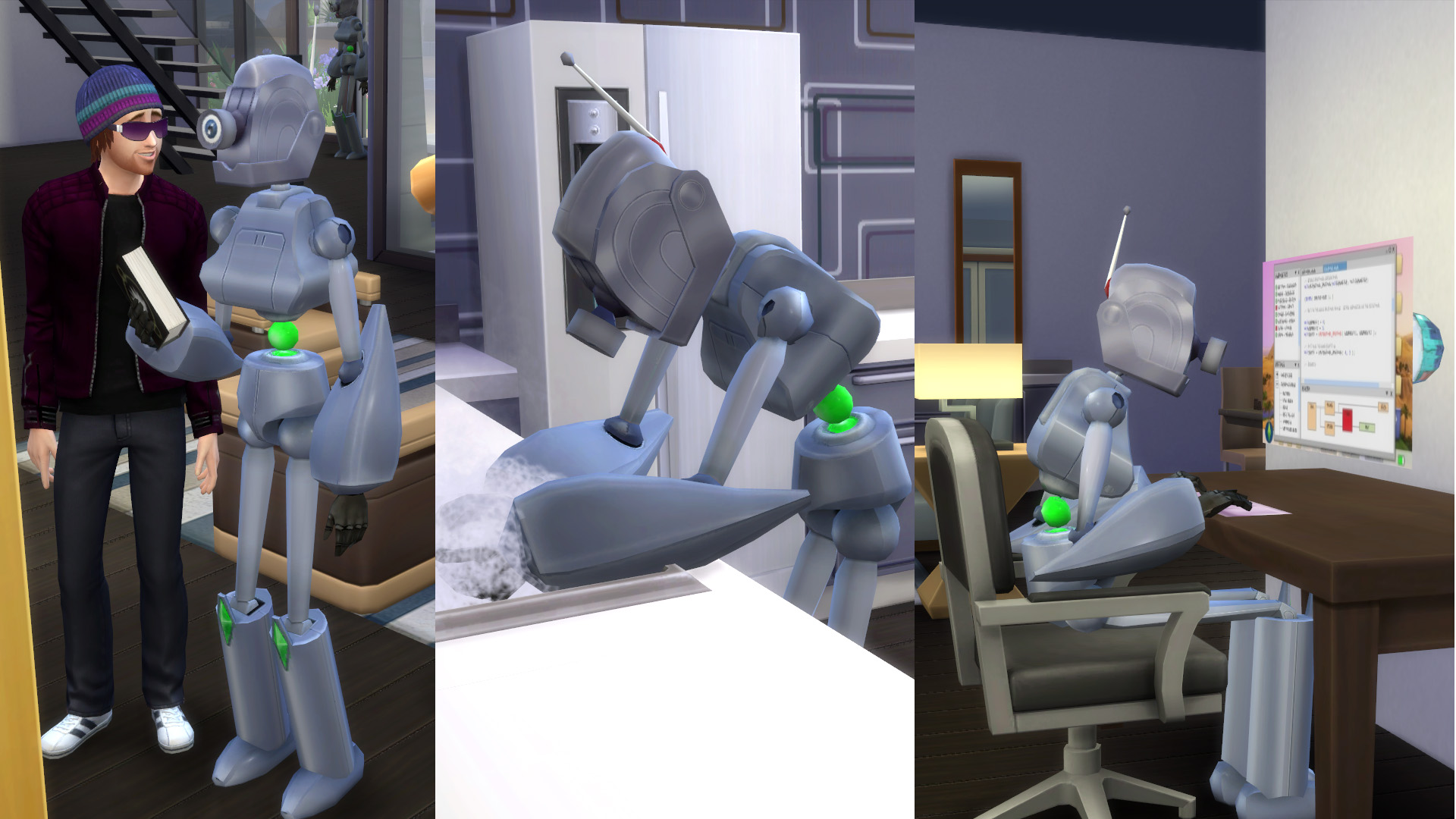 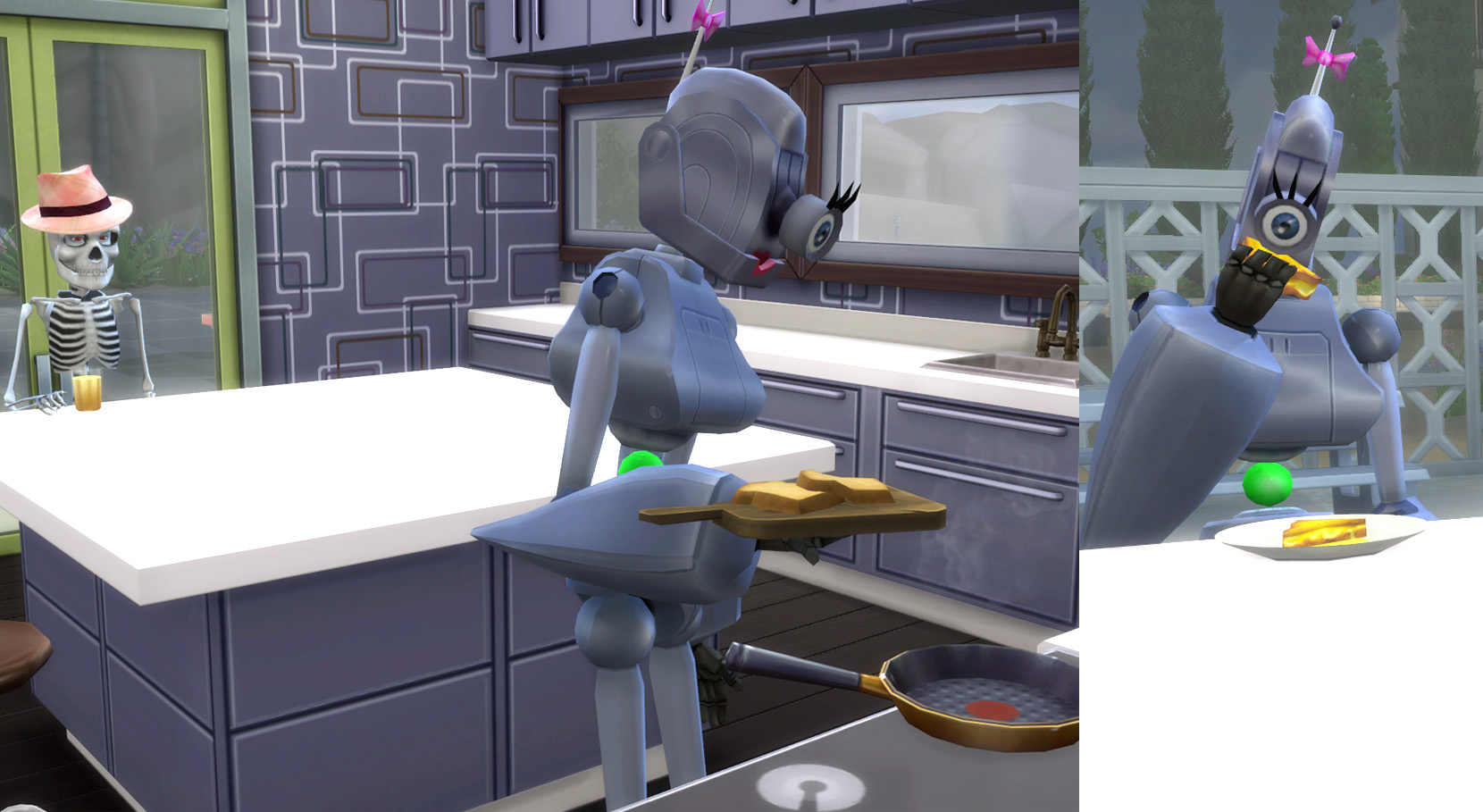 How to assign a hat to a standard category yourself in addition to the game autoassigning hats:
As well as the hatchops allowing Servo to be auto-switched into career hats by the game without literally losing his/her head, it's just fun to put various hats on Servo for parties or other occasions. I've packaged this sim so that it comes wearing a base game hat in the Party category. Note: the custom head is not clickable in CAS when you first install Servo from the Gallery/Library, so you can't access the Hats menu at that point. Instead, once you put Servo in game, have him/her Change Outfit to 'Party', and a hat will appear on him/her. Then, send him/her to the mirror to Change Appearance - the Party category in CAS will show the Hat menu and you can now add or remove hats for all categories according to your preference.

How to choose head recolour:
I also included the vampire variation of the head, because it was the one 'extra' that I had a few requests for (see below pic, top left). To choose the vampire version, select the Servo head's red swatch while still in the above-mentioned Party category of CAS in-game, which gives you access to the Hair menu as well as the Hat menu.

CC worn by this sim:
There is no need to hunt through CAS to find the cc this sim wears. It's a readymade sim and will appear in CAS looking as it does here. The 'head' and 'body' are one combined mesh categorised as hair, in the Hair section in CAS. This is because custom hair stays on when nude, so this way, both the head and body always stay on. Servo also wears a Null Body to make the human body invisible and to supply the 'metallic' modified voice (like the voice modification used by the Knight's Helmet), and this is in Full Outfits. Both items are under a blue thumbnail with a pic of a Servo body and a large red 'V2' (to differentiate it from my old version) written across the pic. The sim wears a custom skin (in Skin Details) just in case EA adds yet more clothing categories which might cause one or both custom meshes to come off and show the underlying sim. Underneath the custom skin is default blue skin, so that's what they'll add to the gene pool if they reproduce.

Potential hat-related issues: I couldn't come up with a solution for hats that 'take over the sim's head', the ones that replace the sim's hair with a hat object. In those cases, the sim will revert to either a floating human head or a human head and body (wearing the metallic underlying skin) depending on whether the game also changes its outfit - see middle-right of below pic. If that happens, you probably want to send the sim to a mirror to change its 'hair' and 'outfit' back to Servo ones. Also, some hats will have clipping issues due to the head's unusual shape, such as bandanas and wide-brimmed hats that tilt down in front.

All of this stuff is disabled for Random, so you shouldn't get townies spawning in robot parts or missing bodies. 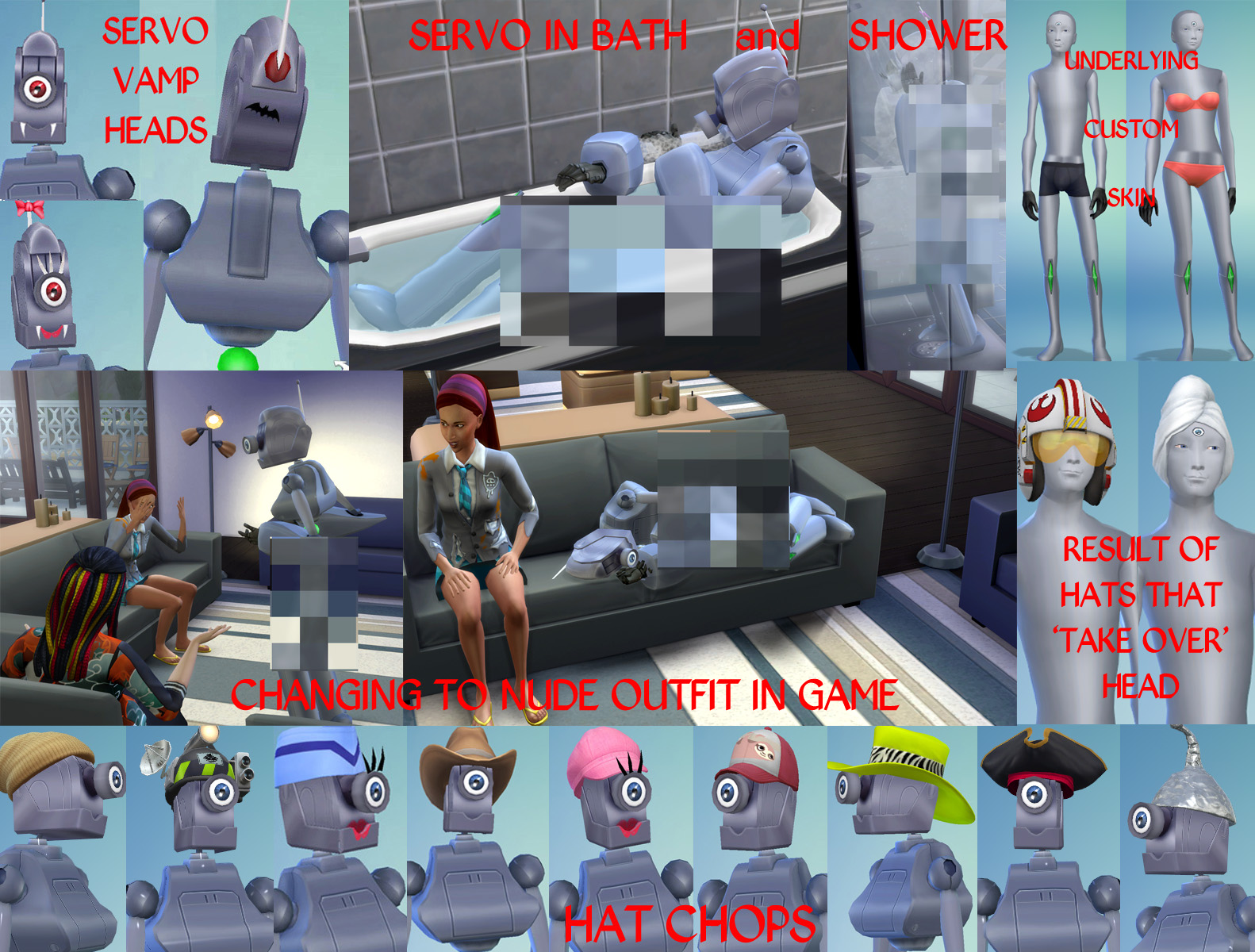 Thanks for looking, hope you'll have fun with these bots.


INSTALL INSTRUCTIONS:
Download the Servo V2 zip file and unzip it. Move the .package files (which contain the meshes and custom skin) to your Documents\Electronic Arts\The Sims 4\Mods folder. Then copy the files inside the folders 'Servo V2 Tray' and/or 'Servette V2 Tray' (which contains the sims) depending on whether you want one or both, to your Documents\Electronic Arts\The Sims 4\Tray folder.