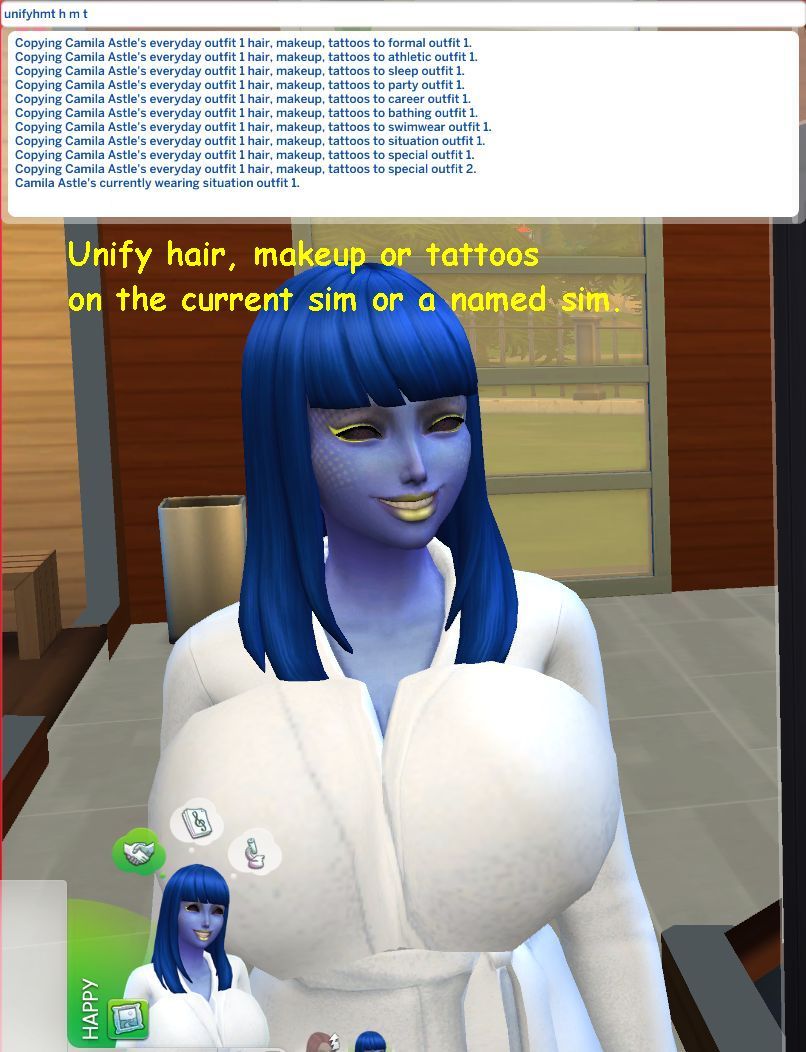 Changes made to hair in CAS in Sims 4 sometimes apply to the other outfits there and sometimes don't. I've spend a lot of time on my sims in CAS getting their makeup and hair applied to multiple outfits. I wrote this mod to simplify the process.

This unifies hair, makeup and/or tattoos across all outfits by copying the selected of those items from everyday outfit 1. So before using this, you will want to set your sim's everyday outfit 1 to have the hair, makeup and/or tattoos you want copied to all the other outfits. This mod works only in Live mode in the cheat console. It doesn't unify items automatically; changes are applied only when you invoke the mod's command. So you can at any time change these items for individual outfits normally in CAS. If you invoke it without any arguments, you get a usage statement:

[blockquote]This copies the hair, makeup and/or tattoos from everyday outfit 1 to all the other outfits.
This only applies to outfits that already exist. Those that don't exist can't be used and are skipped.
usage: unifyhmt [SimFirstName SimLastName] [h|hair] [m|makeup] [t|tattoos]
If the sim name is omitted, then the current sim is used.
[/blockquote]

This mod also includes the bathing and career outfits. The bathing outfit doesn't exist until the sim does something to wear it for the first time, like take a bath or shower.

Apparently in CAS changes made to tattoos apply to all the outfits you can manage with CAS anyway. But by using other mods, such as Sims 4 Outfit Tools by Scumbumbo @ ModTheSims, it is possible to have different tattoos on different outfits. (I'm grateful to Scumbumbo for that awesome Outfit Tools mod; which helped me make this mod.)

unifyhmt h
This copies the current sim's everyday outfit 1 hair to all their other outfits.

unifyhmt hair
Same as above

unifyhmt hair makeup
This copies the current sim's everyday outfit 1 hair and makeup to all the other outfits.

unifyhmt h m
Same as above

unifyhmt m h
Same as above

unifyhmt h m t
This copies the current sim's everyday outfit 1 hair, makeup and tattoos to all the other outfits.

unifyhmt Bella Goth h
This copies Bella Goth's everyday outfit 1 hair to all her other outfits. Note that her original updo bathing outfit hair will be replaced by this.

When complete, the mod will tell you which outfit the sim is wearing, just FYI.

Game Version
This mod was developed using Sims 4 version 1.15.55
The latest version an update was made for 1.40.61