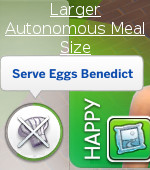 The edited XML files will replace all autonomous recipes with the medium size ones, also as a bonus I have added all the recipes used in expansions and unused ones in the base game to the autonomy. I have also included the non packaged source files with a bash script that can compile a list of all the recipes in the game from the games extracted XML files, so if anyone wants to they can update this themselves quality easily, (if you have Linux installed somewhere that is).

Update: 29/04/2022
V7: Updated the XML file to be compatible with the patch 1.85.203.1030, many new meal recipes added to the autonomy for all expansion packs, I previously missed quite a few due to the inconsistent naming in the game files, but I think I've found them all now.

Should work in any version of The Sims in theory, the extra recipes should be ignored if you don't have the relevant stuff-pack/expansion, the base file had some of the recipes from addons just not all of them for some reason.