No spoon when sharing bed 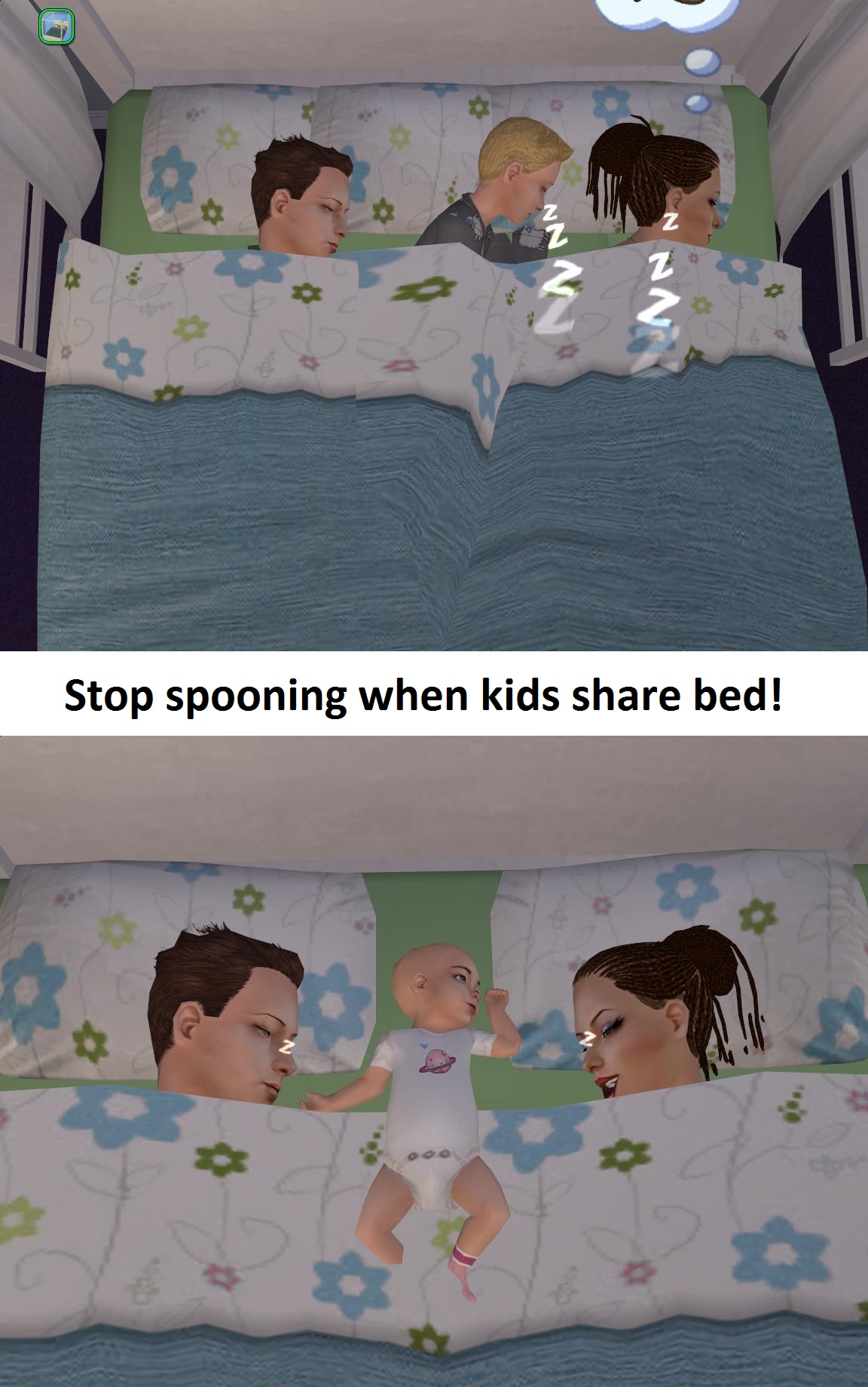 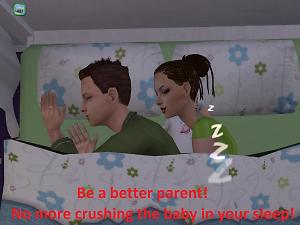 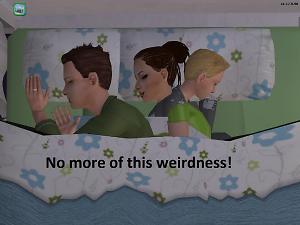 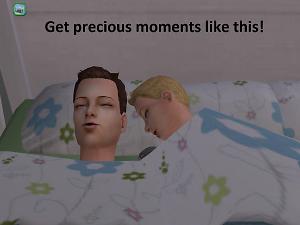 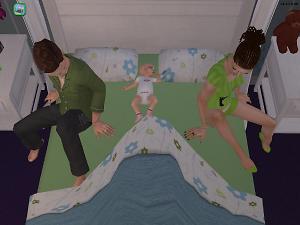 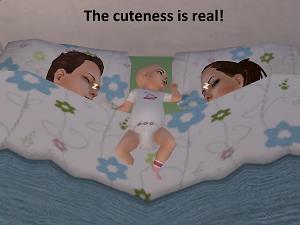 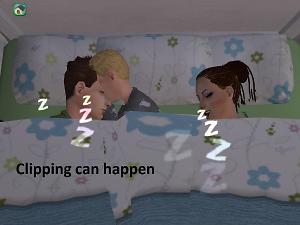 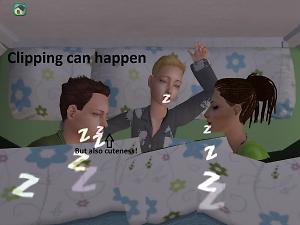 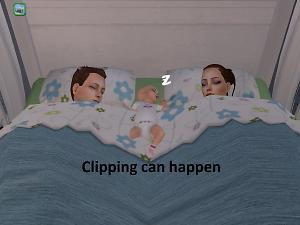 85 Thanks  Thanks     40 Favourited
Has it ever bothered you that Sim children can't share a bed with their parents? I hadn't given it much thought, but my hood has undergone a recent crime wave and all burglars in my hood seem to love targeting houses with small children in them. Poor Karl is devastated after their house was hit twice in one week, and it seemed so very mean that he could not crawl into bed with his parents at night, so he could feel safe when sleeping. I decided to do something about it, and this is the solution I came up with.

The No Spoon Mod
You can simulate three Sims sharing a bed by placing a single bed with no frame in the middle of the bed, and using an inaccessible beds mod to let the third Sim get in to the middle bed. But if the two Sims in the double bed are in a relationship, they will quickly get in to the spoon position, which looks all kind of painful with a third Sim in the middle. So I decided to make a mod that tests if there is a single bed there, and prevent spooning if there is.

And while at it, I decided to include the cosleeper that Simsfreq shared with us during the maternity theme. I love the idea of having little ones in the bed with you, but although Sim-babies can't actually fall down seeing them on the edge like just doesn't look right to me. And having worked in neonatal care I know babies would not do well being under the covers like that. So when I made this mod I decided to include the cosleeper as well. That way I can use cheats and move it to in between the parents once the baby is placed on it, and the mod prevents the baby from getting sqaushed by spooning parents.

How does it work?
This mod checks for the objects by checking their guids. This means it will only work for the three objects I've chosen to include. I'm sorry for making you use a specific single bed for this mod, it is the best and easiest way to set it up so I hope you'll forgive me.

To make it easier to find the correct single bed matrass in catalog I have edited it's name and description to clearly state it is the no spoon bed. Thanks to Rebecah's generous policy, I am including that version in this thread. I have not changed guids so Rebecah's original works fine too. You have to choose between the version included here, and Rebecah's original. So if you had it already and you want the version with updated catalog description, please remove the original from your downloads.

The mod will only prevent spooning if one of those three objects is within one square from either Sim in the double bed. If you have apartment life, this mod also prevents Sims from doing the waking up cuddle. The distance check means that it will also stop spooning even if the cosleeper is left in it's original position. I am sorry about that, but I couldn't think of a way to distinguish between original and shifted location, because both are less than one tile away. If that is a dealbreaker for someone, I am happy to make a version of this mod that does not look for cosleeper. Just let me know in comments.

Things you need for single bed approach
You will need this mod, the HBKinleyBunkbedsMatrass bed (included in this thread, and available on affinity, see link above), and Use Inaccessible Beds by Inge at simlogical. Use moveobjects on (available in base game) and either boolProp snapObjectsToGrid true (available in base game) or setQuarterTilePlacement (only available in M&G) to place the bed in the middle. The Sim can get in to it thanks to Inge's mod. My mod then keeps the Sims in the double bed from spooning.

I also recommend that you get the error fix below. It is not required for this setup to work, but the bunkbed matrass will cause errors if a Sim tries to read a sleeping child to sleep. The error fix fixes this. For more information please see below.

Things you need for cosleeper approach
You will need this mod, and either one of the two cosleepers in simsfreq upload (see link above). Once the baby or toddler has been placed on the cosleeper, use moveobjects on (available in base game) so that you can pick it up, and either boolProp snapObjectsToGrid true (available in base game) or setQuarterTilePlacement (only available in M&G) to place it where you want it. I recommend the middle, for the least amount of clipping.

Not quite perfect
While preventing spooning does prevent some of the worst clipping, there will still be clipping. Sleeping poses for children are rather all over the place (just like real kids

) which means they will sometimes clip with the two people sleeping in the double bed. The bed covers also clip, but if you use the same recolor for the single bed it's not that bad.

I've included some examples of clipping, so you can see for yourself. 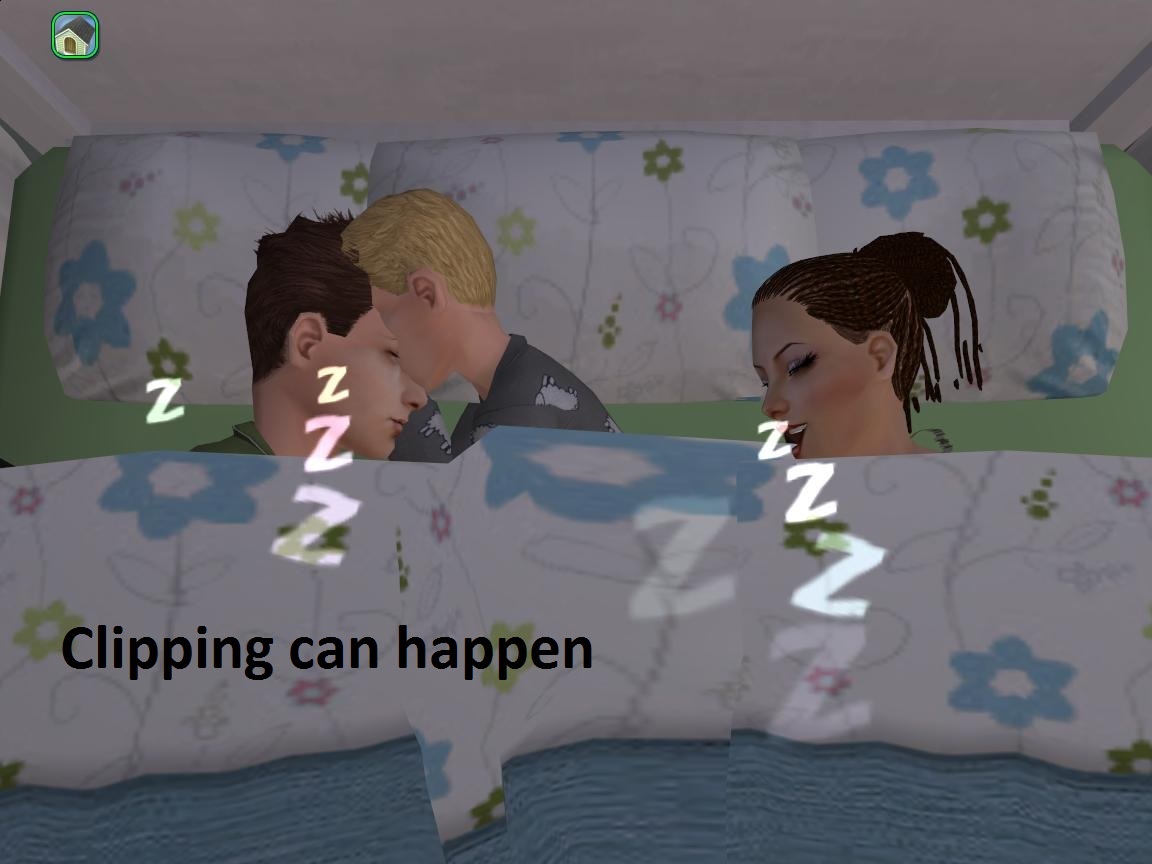 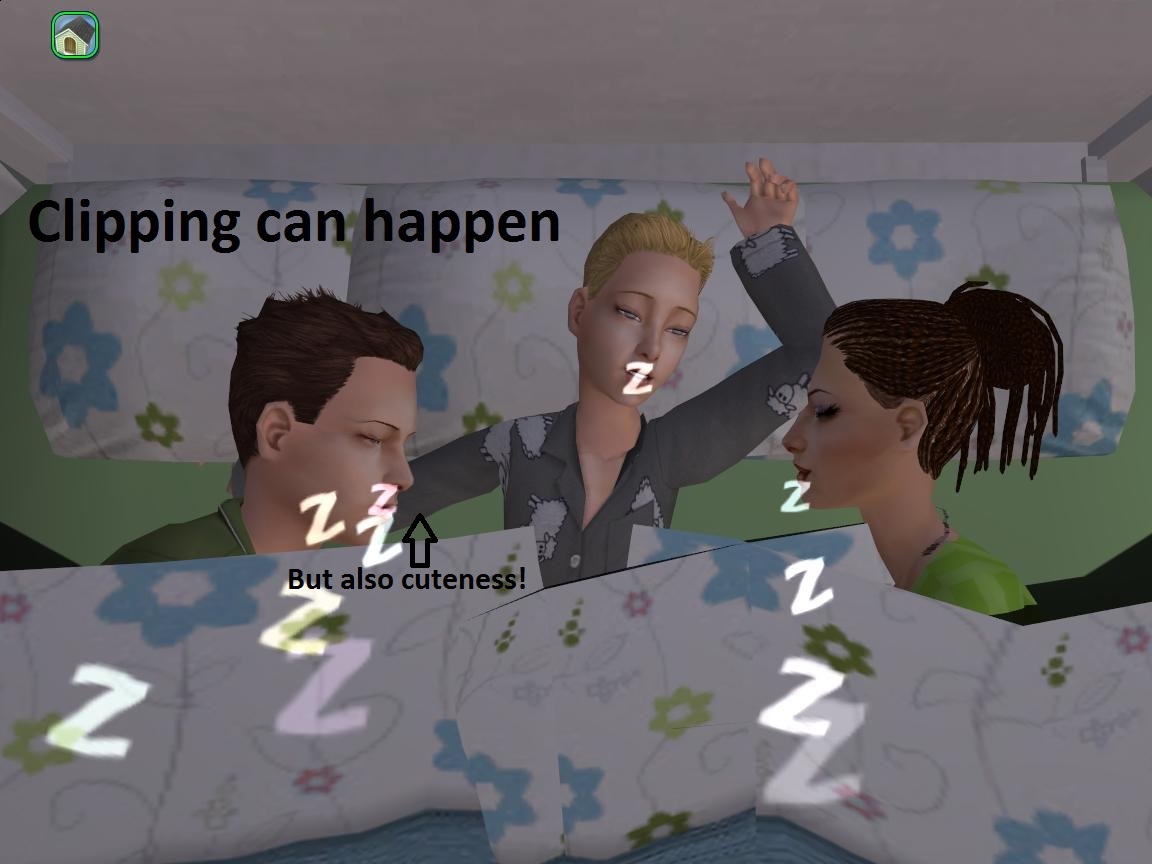 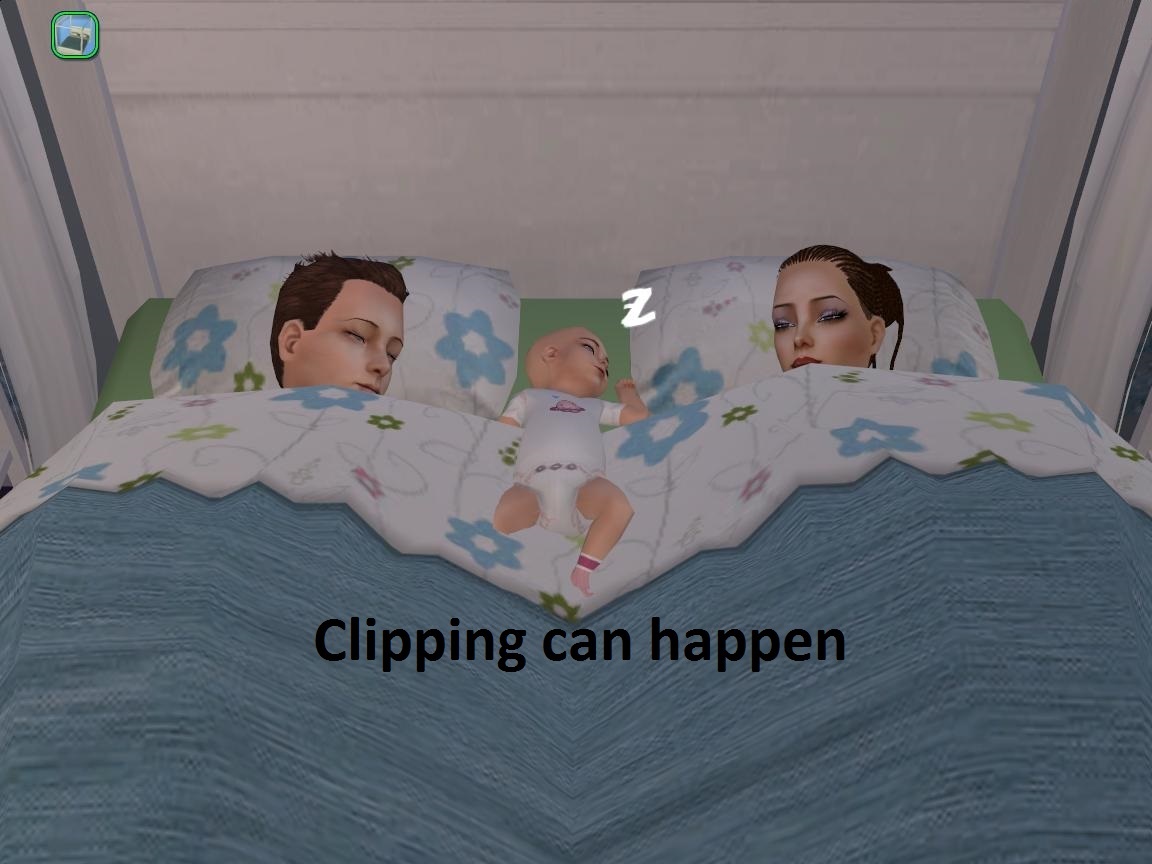 Additionally, as stated earlier this looks for the object within a one tile radius. I tried to make it also check if the room is the same, but it refused to work, so if you the cosleeper or the no frame single bed right behind the double bed, say on the opposite side of the wall, it will also prevent spooning since that's also only one tile away. So if you use the bunk bed the single bed is from, please keep in mind to not have a kids room with the bed right behind a double bed with a couple sleeping in it.

Compatibility
This mod comes in two versions. Which one you should use depends on what your setup is.

BG-FT version
Use this if your latest released expansion back is base game up to Free time. Also use this version if you have Mansion & Gardens, but do not have Apartment Life.

AL
Only use this if you have Apartment Life. It is also compatible with Mansion & Gardens, but you need to have AL for the morning cuddle feature to work properly, and it's included in this version.

Conflicts with inteenimater package B. Load order will not help with this conflict, you will have to choose between my mod and teen/adult couples being able to spoon in bed. If you want to use my mod, load it after inteen, and my code will take effect. But adult/teen couples will no longer spoon in bed.

HCDU will find all conflicts, so just run it after you install this and if it doesn't find anything it's fine. If you find a conflict, let me know and I will take a look at it.

Credits
Inge for creating the inaccessible beds mod.
Rebecah for finishing Hope Baylor's Kinley bunkbed, and for her generous policy allowing me to include the bed with this upload.
Simsfreq for creating the cosleeper.
iCad who mentioned putting a single bed on top of a double bed long ago. That is where I got the idea from when I found myself wishing kids could sleep in their parents bed with them.

Read to sleep error fix
This mod is optional, but I do recommend it if you are going to use Rebecah's Kinley Bunkbeds Matress. This fixes an error with the Kinley bed where the read to sleep test fails, causing idle adult Sims to throw errors frequently if there is a child sleeping on the matress. Any time the Sim is idle the game will test which interactions are available for them to do autonomously, and there is some issue with the Kinley bed and the chair test in read to sleep code.

Unfortunately the code that errors is a so called lua, which I can't edit, so to solve this problem I added a check in the read to sleep test that stops the test if it's this specific bed. It won't affect any other beds, so you can still read to sleep fine with any other bed. But it's disabled for this specific bed, both for autonomous and controlled use, since it can never get past the test and therefore won't work either way. If you've used the bed earlier with no problems then you probably don't need this mod, but I wanted to include it in case other people experienced the same problem as I do.

Conflicts
Will conflict with other mods that affect the read to sleep test. No known conflicts, but if you have a mod related to reading to sleep I'd recommend running HCDU to check. If you are unsure you are welcome to ask me in comments.

Fun fact: I started this upload thread on January 1st, but did not have finished pictures so I saved it and intended to come back the next day. Then health happened and whoops it's almost three months later. But yay it's finally out