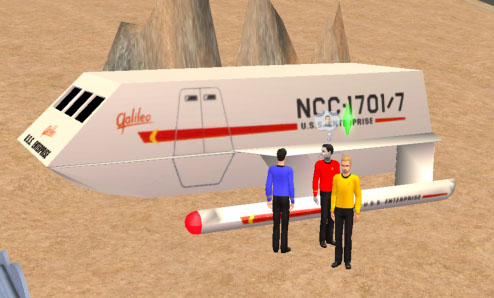 200 Thanks  Thanks     5 Favourited
This is a new mesh, and means that it's a brand new self contained object that usually does not require a specific Expansion pack (although this is possible depending on the type). It may have Recolours hosted on MTS - check below the description for more information.
And here's another one, after my TNG-shuttle, I decided to create also one from the TOS-era and of course it had to be the famous Galileo 7.

This also is based on a decorative (and not on a vehicle) and thus will not cause any carpool-problems.

The 3DS-mesh was from www.3dcafe.com, the creator not named, and I had to do massive rework in Cinema 4D, due to the fact, that the normals were scattered in every direction and some other issues.
Don'T take this as an exact reproduction, first that type of shuttle lands on three landingpods, but I omitted them, saving polys. Second I decided to make it a little bigger than seen in the show, since there was a discrepancy between the interior and the exterior shots, with room for seven people aboard, it had to be bigger.

Comes with english catalog-entry and costs about 2000 §, I think that is really cheap for a small spacecraft... :D