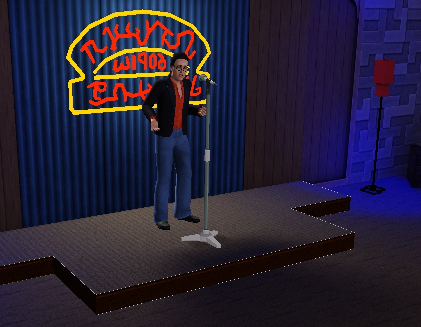 
Mod Description
Developed and tested with game version 1.67.
This mod requires another object to work. Dashboard will report a
conflict between the two, but it's all right, this mod overrides some
resources of that object. The package of this mod has to be placed
into the Mods/Overrides folder.

I made a crappy AVI video to show how it looks like (don't worry about the link/file,
it doesn't allow direct download and may require extra clicking but I promise it's harmless).

This mod is a script that allows the use of an object (supposedly a microphone) to perform
and watch a stand up comedy show. The comedian will tell a series of jokes and the
audience may like them or not. The performance's evaluation is based mostly on the
charisma of the comedian. If Sims like the show they will give tips so this can become
a kind of profession (especially if used with the relative Career) or at least a lucrative hobby.

Updated Override version: the package goes into the "Overrides" folder and the mod requires Esmeralda's
Functional Microphone and Stand (Cloned from Mirror). Her package goes into the usual "Packages" folder.
Make sure that your "Resource.cfg" gives more priority to the content of the Overrides folder.
If you want to use the custom career you need NRaas Careers + NRaas CareerDataSelfEmployed
(technically the latter is only needed for choosing the career from the town hall rabbit hole).

I provide only an updated override version of the mod because handy simmers will know how
to edit it to fit their needs, just remember that the object to use as a mike requires the "RoutingSlot_0"
(if it's a remesh of a cloned mirror it should be fine) and please note that the namespace of the class
has been changed to Sims3.Gameplay.Objects.Arsil.StandUpComedy.ArsilMike.

21th Mar 2015 UPDATE : NEWS
Now a comedian of level 3 in the career can perform a show in a Show Venue
(Theatre, Stadium, ... the same RabbitHoles where a rockstar can perform a concert).
Some settings are xml tunable with the usual resource ("ArsilMike XML tuning").
- duration of the show (default value 45 minutes)
- extra payment (default value 0)
- global cooldown before being able to perform another show (default about 4 days to not be too cheaty and keep the comedian using the mike)

The regular pay for a performance in a show venue is based on charisma, mood and randomness.
With 10 charisma the average pay (if not in a bad mood) is about 500 simoleons (you can also
use a negative value for the extra payment to tweak the pay, but 2 Simoleons is the lower cap).

The day after the performance, the newspaper may mention the show if some criteria are met:
- cooldown between shows is set at least as 24 hours
- charisma is at least 8 and comedian wasn't in a bad mood during the show
- random factors

There are a few occasions where the show is referred to as a Concert (e.g. Attend Concert)
and you will hear the concert audio near the RabbitHole, not sure I can do much about it and
probably not worth the effort anyway.

I noticed a bug (not the mod fault, but generic): a Sim can attend to a show/concert with the
comedian/musician performing in the RabbitHole! The performer will exit from the building
and re-enter it with the Sim who asked and attend to his/her own show :D

Things to keep in mind:

PERFORMING
- with the itun i provided, in order to perform, a sim needs at least 1 level in the charisma's skill.
- only sims with the "Good sense of humor" trait are really encouraged to autonomously perform
- charisma skill, mood, good sense of humor and charismatic traits affect the comedian performance
(with low charisma you wont get many laughs and especially tips)

WATCHING
- watchers' mood, traits and relationship with the performer also influence their reaction
- the itun I provided for the watching interaction only advertises fun, fun is increased by the script
itself because if a sim doesn't like the show I don't want him to gain fun. Does that make me a bad person?

Showtime EP additional features.
The mod is basegame compatible, but if Showtime is installed then:
- the "Natural born performer" trait helps the performance
- watcher who really liked/disliked the show get a good/bad moodlet

VENUE ADVICE
An "Hangout" lot type is a good choice to put the mike since it attracts charismatic sims
and is avaiable w/o EPs (the game must be patched to a certain version though).

Additional Credits:
All the respective authors and contributors of the tools and tutorials for modding TS3.
Esmeralda and the users who provided feedback/encouragement in the forum.
Danieu for helping me to figure out how to make a NRaas skill based career.
MTS and all modders who made the game much more enjoyable.
Files Need help with downloading or installing content? Click here!