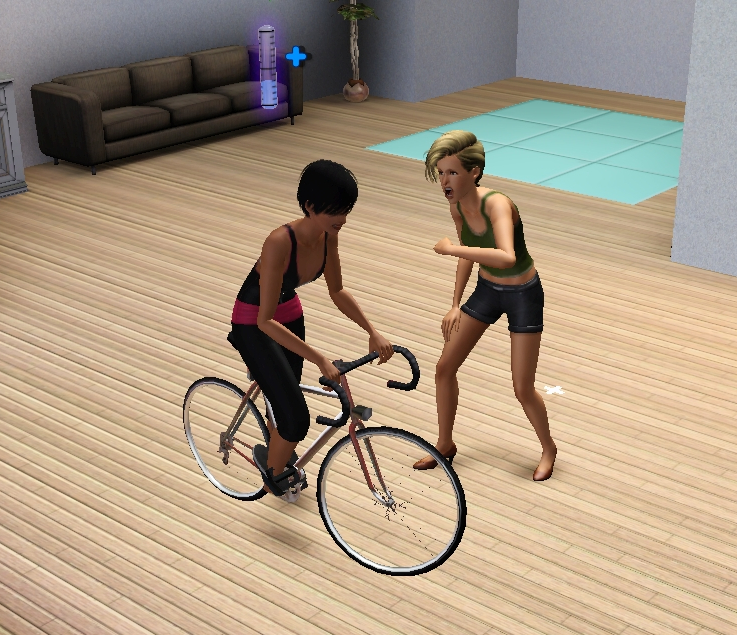 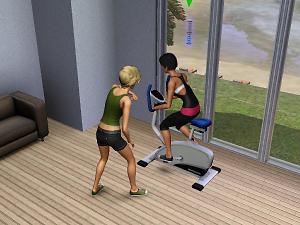 Created by Arsil
View Policy / About Me View all Downloads
Uploaded: 5th Jun 2016 at 1:40 PM
Updated: 25th Apr 2017 at 2:38 PM - Improved the animations and added a link to an unofficial version of Buzzler's Moar Interactions that is compatible with this mod
25 April 2017 Update : Removed the old version from the files available for download.
2017 April 5th Update : Improved animations. See first comment for a version of Moar Interactions compatible with this mod.
2016 June 7th Update : Added audio. Still looking for a solution about the conflict with Moar Interactions by Buzzler
2016 June 6th Update : Updated animations and jazz script
See ATS3's Sandy mesh conversion (and adaptation!) from TS2

Check the right foot in the first screenshot to see what I meant at that time, now the animation is passable.
Don't check the shoes of the trainer in that screenshot though! (uninstalled EP...)

Game version 1.67 (might work with other patch levels, beats me)

Exercise Bike, cost 427, found in
--- BuyCatalog/ByFunction/Entertainment/Sport
--- BuyCatalog/ByRoom/Living/IndoorsActivities
--- And also in the Resort section of both.
It uses the mesh of the adult bicycle

My bike is just an example, you can delete the related package and use available third party re-meshes.

This mod is self-explanatory. I've cloned the adult bike - without re-meshing it, I'll leave that job to
real meshers (and in case someone decides to try, I suggest to clone my object so you don't have to
make any adjustment to the OBJD and OBJK) - and made a script to make it work as an exercise bike.

It will work just as the other athletic objects (treadmill, bench, chin up bar and some other, IIRC also Simoro'
crunch mod - nah that didn't use an object - and since we're here let me say how talented he/she was with
animations!) and this means that Sims can also train other Sims using the bike (that's what is happening in
the screenshot) and this also means compatibility with the trainer skill based career from NRaas Career plus
the Self Employed module (tip: give to trainers the couch potato trait so they will not work out themselves
and will only focus on training other Sims, but do this only if you are ok with the other side effects of that trait).

Did you know?
Working out on a treadmill burns more calories than on a spin bike (because the former forces you to keep
the intensity/pace of the training stable, more muscles are involved and other factors). It is estimated that
this can be up to 25% more than you can get on a spin bike. Not that I'm an expert, I just read that somewhere
while I was checking if and how the xml tuning needed to be adjusted from the one of the treadmill.

Note that the bike can be accessed (routed to) only from the left side.
I tried to experiment with the mirroring options of the jazz script but I couldn't make it work.

I've added the same audio used by using normal bicycle, the timing it starts and stops is
not perfect but is good enough. Sometimes when Sims stop pedaling you can hear the brakes.
From the xml you can change the audio resource used (but I don't think there is anything more
fitting) or disable it putting an empty string as value.

This was actually one of my first attempt at modding (obviously it was a disaster at that time),
I decided to give it another try when I saw ATS3's Sandy conversion of the TS2 object.
Which she promptly adapted to be used with this mod. See link near the top.

a2o_ArsilPedaling41_bicycle
This animation is played less frequently and represent a breather: the first full rotation is
identical to the one of the first animation while the second one is much slower (which is
good because breaks the otherwise monotonous pace. This is associated with a kind of
idle animation for the Sim (the same used while riding on street: looks left and right).

Extra Animations
With such a small selection of animations working out with the bicycle is pretty dull and repetitive
compared to using the other machines. More idles for the Sim and different speeds based on
Athletic skill would be nice and could be easily added to the jazz script, but I think I'm done with this mod.

All respective authors and contributors of the tools and tutorials for modding TS3.
MTS and all modders who made the game much more enjoyable.

ATS3's Sandy re-mesh
http://aroundthesims3.com/objects/f..._sport_04.shtml
Also Thanked - Users who thanked this download also thanked:
More Traits for All Ages
by mikey
'No Stretch' Children can Series
by kapaer
Children can care for their lil' siblings
by TheSweetSimmer
Retuned Attraction System (1.67 compatible)
by Fentonparkninja
[UPDATE] 10 new CAS Sliders (Breast, Hip, Waist, Butt, Head and more)
by jonha
The Third Person Mod
by QuackGames
No Mosaic Patch 1.22 to 1.67 edited 01/16/2014
by velocitygrass
Snow but better! - Snow replacement mod
by Lyralei
Deep Conversations
by QuackGames
No Intro
by Rick
Packs Needed
None, this is Sims 3 base game compatible!
Other Information
Type: