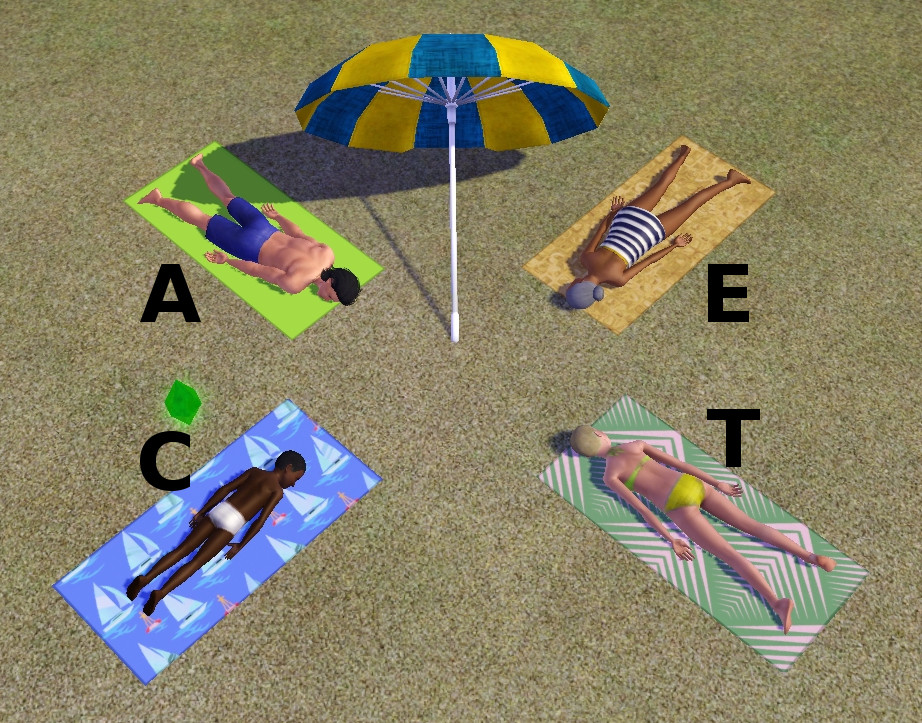 207 Thanks  Thanks     58 Favourited
PREMISE and APOLOGY and HELP REQUEST

This mod was ready for a while but I was ashamed to upload it because of the low
quality and the issues of the animations. In the future I may try to make them better,
but I'll welcome any help since making animations is not my cup of tea and I don't
have fun making them. I'm not saying this to get pity, but only because I'm very
sorry to upload a bad mod. After giving it much thought, I eventually decided to
upload it anyway because it growed on me and I like it despite its many flaws.

Develped and tested with game version 1.67.

This mod adds to the game a beach towel, very simplified, that can be used with
the basegame only (no EP required). Sims can use it to sunbathe, getting a bit of
fun and relax. If user directed, sims can also sit on it: that interaction is pointless
(that's why I disabled to use it autonomously, because it has no purpose), but looks
nice and can be used for taking screenshots or things like that.

You can find the beach towel in the Buy Catalog under Entertainment/Misc and
between the rugs... more on rugs later.

Sims will sunbathe autonomously, in case Seasons EP is installed I put some
filters on the weather and used a temperature threshold (tunable with an XML
along with the sunbathing and sitting duration). The sunbathe interaction ITUN
should take care of disabling the interaction if there's snow in the ground, but
I don't have Seasons so please check it out. If the weather changes while
sims are already sunbathing they don't give a damn and keep doing it.

The beach towel is an object that must be buyed from the catalog and placed
somewhere, it can't be picked and put in a sim inventory (I can consider to
implement that if strongly requested, but, I don't know, I like it more this way).

The beach towels showed in the screenshot are made with Create A STyle,
the presets are very ugly. More on that later.

Why use this beach towel instead of the one from Island Paradise? I guess for no
reason at all, if not to have a bit more diversity and options, since that one is better
in any conceivable way (especially using Inge Jones and icarus_allsorts mods),
but maybe who doesn't have IP will appreciate (or settle for) mine.

If teen sims use the sunbathe interaction of the beach towel, the animations
have the "sinking" issue. As a patch, I added an extra animation (a 1 frame
animation, basically a pose) that raises them so at least when they are
motionless they don't look like they are sinking in the ground. Not that the
animations are so nice to watch anyway, some movements are unnatural
(I rotated too much the pelvis in the first frames, as you can see from the
weird looking lower back of the sims when they are kneeling) and the
children animations were made very quickly and only because I would have
felt guilty to exclude them.

I don't know how to fix the animations for teens, maybe making new ones
from scratch and just for them, but it will be hard nonetheless (I'm sure that
anyone who ever did an animation or a pose where the sim's barycenter is
lowered knows what I'm talking about, there are no references to understand
where their feet are gonna end up).

Tell me if you think that sims use annoyingly the beach towel again and again,
I can try to add a cooldown period so that they wont be able to use it autonomously
two times in a row until a timer expires.

The object is a cloned rug of 2x1 tiles, I wanted to leave just one preset with
a neutral solid color (you can use Create A STyle to personalize it) but I wasn't
able to do it because I can't use some modding tools and haven't learned yet
how to do it "manually" with S3PE. I'd also like, if possibile, to change the
footprint so that the green arrow points to the small side of the towel where
the sim's head goes when he sunbathe, so it will be easier to place it correctly.

Additional Credits:
All authors and contributors of the tools and tutorials for modding TS3.
MTS and all the modders that made the game much more enjoyable.