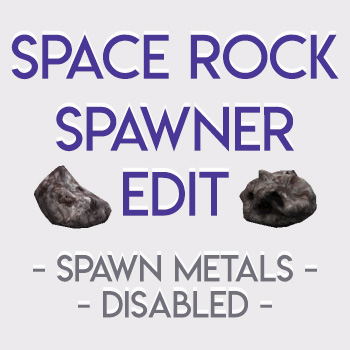 Created by sweetdevil
View Policy / About Me View all Downloads
Uploaded: 14th Mar 2021 at 1:27 PM
I got an ask about preventing space rocks from spawning around the neighborhood and, having looked for some "no dig spot spawners" mods lately myself, I got curious about this. Turns out it's easier to change this than it is to nuke those party wishes! (I will die mad about that)

I have included metals from various EPs; if you don't have said EPs, the metals will simply not spawn. I didn't include the metals Compendium and Supernovium in the spawners since they're supposed to be achievable through gameplay tricks 😉 As for the Gigantic space rocks, those don't spawn "in the wild?, only through the fallen meteor scenario (I don't believe you can obtain them from elsewhere like the mausoleum).
See HERE for a list of which EPs each metal is from.

Versions (choose only one)

The higher the probability, the more likely it is that a metal will spawn compared to the others.
I assigned these based on the types of metal: small rock = common metal; medium rock = uncommon metal; large rock = rare metal.

Here you can see which spawner spawns which metal, as well as the probability for it to happen: