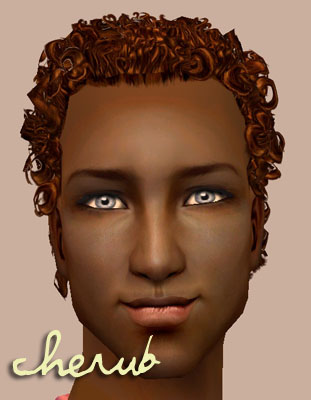 37,660 Downloads 8,466 Thanks  Thanks 384 Favourited 439,858 Views
Featured Upload!   This is a featured upload! It showcases the best talent and creativity available on MTS and in the community.

Created by HystericalParoxysm
View Policy / About Me View all Downloads
Uploaded: 27th Apr 2006 at 10:05 AM
Updated: 8th Jul 2009 at 12:31 PM - Removing old TOU
I am pleased to (finally!) present my first publicly-released hair mesh, "Cherub" for males. This delightfully curly mesh is the result of many dozens of hours of work, and the texture and alphas are 100% original, handpainted over the course of two days in Photoshop. A version is planned for females, too, and will be released when it is complete.

It is available for all ages: toddler, child, teen, young adult, adult, and elder. Elders will have the same hair colour as adults. All of the included colours except white (black, dark brown, light brown, blonde, platinum blonde, and red) are in the genetic hair bins like Maxis hairs, and have the correct eyebrow colours; white shows up under custom and has blonde brows by default. The poly count is on the high side, 2896 polygons, 3257 vertices; however, this isn't too outrageous, as the Nightlife "rave kimono" hair with the fan and beads is around the same count.

I've tested it enough myself that I'm satisfied with it, but please let me know if you have any issues. One small thing to be aware of: on the child and toddler meshes, there is a tiny imperfection, a little gap that'll occur behind the ears when a sim looks up really far; it's an extremely small gap, and only visible from one angle when they're head's drastically tilted up, but I thought downloaders should be aware. My attempts to fix it have been unsuccessful, but it's such a tiny thing , I don't think it's that big a deal, even from my viewpoint as a serious perfectionist.

Please don't comment if you're just going to request something; I don't think I want to make another hair mesh (besides the female version of this) ever again, after what it took to make this one, and I don't take requests unless otherwise noted.