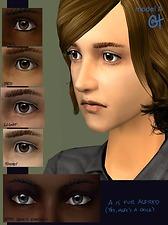 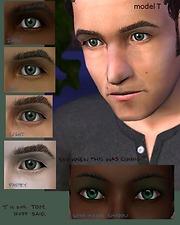 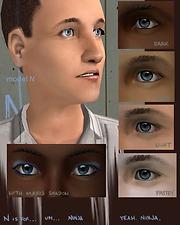 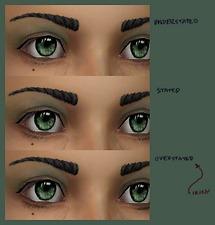 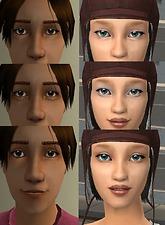 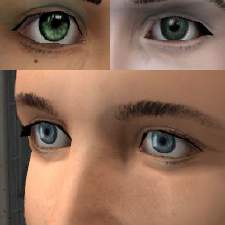 5,176 Downloads 952 Thanks  Thanks 59 Favourited 40,277 Views
Picked Upload!   This is a picked upload! It showcases some of the best talent and creativity available on MTS and in the community.

(The lowdown in one line: Multiwear, natural eyeshaping "make-up", for male and female, child through elder, four shades to match most human colored skins.)

This is absurd. I spent way too much time on this. So many other things to do, and of course the thing I finish is the thing no one cared about but me. Let's get this typing part over with!

I'm super obsessive about faces. Particularly the details of them. I've noticed a distinct lack of anything that could help make a male sim's eyes (or women that don't wear crazy eyeshadow) stand out. I need to be able to define the line of the upper lid, and the shape of the bottom lid. Dagnabbit! I want real buggy eyes! Curse you Maxis and your limited number of planes!

And so, for every lovely I make, I attack their eyelids pixel-style.

Initially, these were in the eyeshadow bin with an intention to make them multi-wearable with layerable eyeshadow and such over the top (rather like my layerable lip-shapes). I was cruelly thwarted by the fact that eyeshadow doesn't like to be multi-worn.
Conclude, conclude, these are in the blush bin and I threw out the colored eyeshadow thought. Why? Because some one already did a bunch of those. Yes, your Maxis eyeshadow is finally going to get some use again.

You won't find any crazy annoying eyelashes drawn on these. I dislike the painted on look. However, I have included the "Understated Underlashes" set of three lashes (found under eyeliner). Just in case you want eyelashes that actually start on the eyelid proper. They're good for close-up shots.
If you want longer lashes, I like Anva's Lashes for Males. They show well without looking ridiculous.

Back to the 'eyeshadow' itself. The alpha had to be pretty dark, to cover up any weird shading on the various skins. As such, I had to recolor to make them fit the widest possible skin tones.
In general, 'Dark' will work best on the original Maxis dark skin, through HP's Idolatry of the Flesh Uber Dark tone. (I don't have the true Maxis skin right now, in the pictures you'll see it modeled on HP's skin, and a slightly lighter tone than is optimal.)
'Med' (Medium, yes, I'm being lazy), will look just fine on the two medium shades of maxis.
'Light' looks best on skins around the same tone as the origanal Maxis light skin.
And due to the proliferation of pastey emaciated dollish skins, we also have "Pastey". These look totally rad on Teru_K's BJD skins that are hanging around. Though I had no true pastey sims in game to model. Pastey also works alright on HP's palest shade of Idolatry.

If you have issues matching tones with skins that I didn't take into account, I've found CatofEvilGenius' Subtle Eyes (for Idolatry) to be indispensable in smoothing color differences.

Enough! Talk is cheap! This is what you get:

Model A-
A is for Alfi. That's me. My eyes have clearly defined round upper lids and what I like to call "minimum bugginess" of the lower lid. They have a tendency to shadow just a tad. I don't sleep enough.
This model has the best alpha of the three. It'll blend with the widest range of skin tones. The shape of the upper lid follows the line of vertices on the mesh, which means it'll look good on a similarly wide range of eye shapes, without blurring. The shading on the upper lid will make the eye look like it's sticking out further from under the brow.

Other CC on Alfi's selfsim:
Model K lips by me
Bright Eyes by Shady
Idolatry of the flesh by Hysterical Paradoxysm
Hair by raonsims

Model T-
If you've been watching my work, or if you've ever stopped by my deviantart, you saw this coming. Yes, T is for Tom.
These eyes are excellent for clean, unsloped, almond eyes. It's good for making eyes look... set and quite real. And decidedly masculine. It also adds a little shading to the side of the nose. Right where the pads of your glasses would normally sit, ya know?
These are not particularly unique eyes, but for a standard euromutt pretty, they work wonders in making a face more real.
The thing you have to watch for with these; it's textured quite tightly, and has a tendency to distort with certain face shapes.

Other CC on Tom:
Model T lips by me
Cropped Curls by me
Mesh by HP
Hunkalicious Button Down Top by Fanseelamb
Some other crap by me, including face texture and eyes.

Model N-
N is for, N-my-friend-has-the-coolest-prettiest-eyes-ever. Yes, that starts with an N. You know what else starts with N? Not a stalker. Nope. Jeebus.
This is my favorite texture of the three. These are what I call 'buggy tired eyes'. And they are the Pretty. The lower lid is shaded poofy, and rounded to make the eyeball look... more ball-ish. There's a shadow right by the nose, to set the inner corner of the eye further into the socket. The upper lid is fairly curved, but falls low over the outer corner of the eye. Thus "tired". Is this making any sense at all??? Crap.
These eyes look absolutely amazing on protruding, wide eyes. Sims with low cheekbones or gaunt cheeks may find that they start having less 'bug' and more 'bag'.

Other CC on the sim above:
Idolatry of the Twitch by Twitchhugstrees
Some other crap by me, including lips and eyes.


If you want to have happy-fun-pixel-time with prettifull-eye-shape-things, send me a woopdi-awesome-personal-message first.
Translation: You can almost certainly use my textures/alphas for whatever you've got in mind, be kind and tell me your intentions beforehand.

Also Thanked - Users who thanked this download also thanked:
Bits 'N' Bobs - 11 (not 10!) facial effects for your Sims
by MistyBlue
Who are you? Unique lip shapes, plus Layerable lipsticks for Lots of Looks
by AlfredAskew
Lashes for Males - All Races
by Anva
3 layerable nosemasks in 2 shades
by threehundred
Botox?! No Way!! - Extra Multi-Wearable Wrinkles
by Onah
Black Widow Liners
by dragonmandy
The Complete Little Makeup Bag
by bruno
Layerable Natural-looking Teeth!
by alkaloid
Just Shadow - Unisex Eye Shadow
by bruno
Realistic Sclera & Tearducts - Two Versions - Updated 6/15
by Anva
Packs Needed
None, this is Sims 2 base game compatible!
Tags