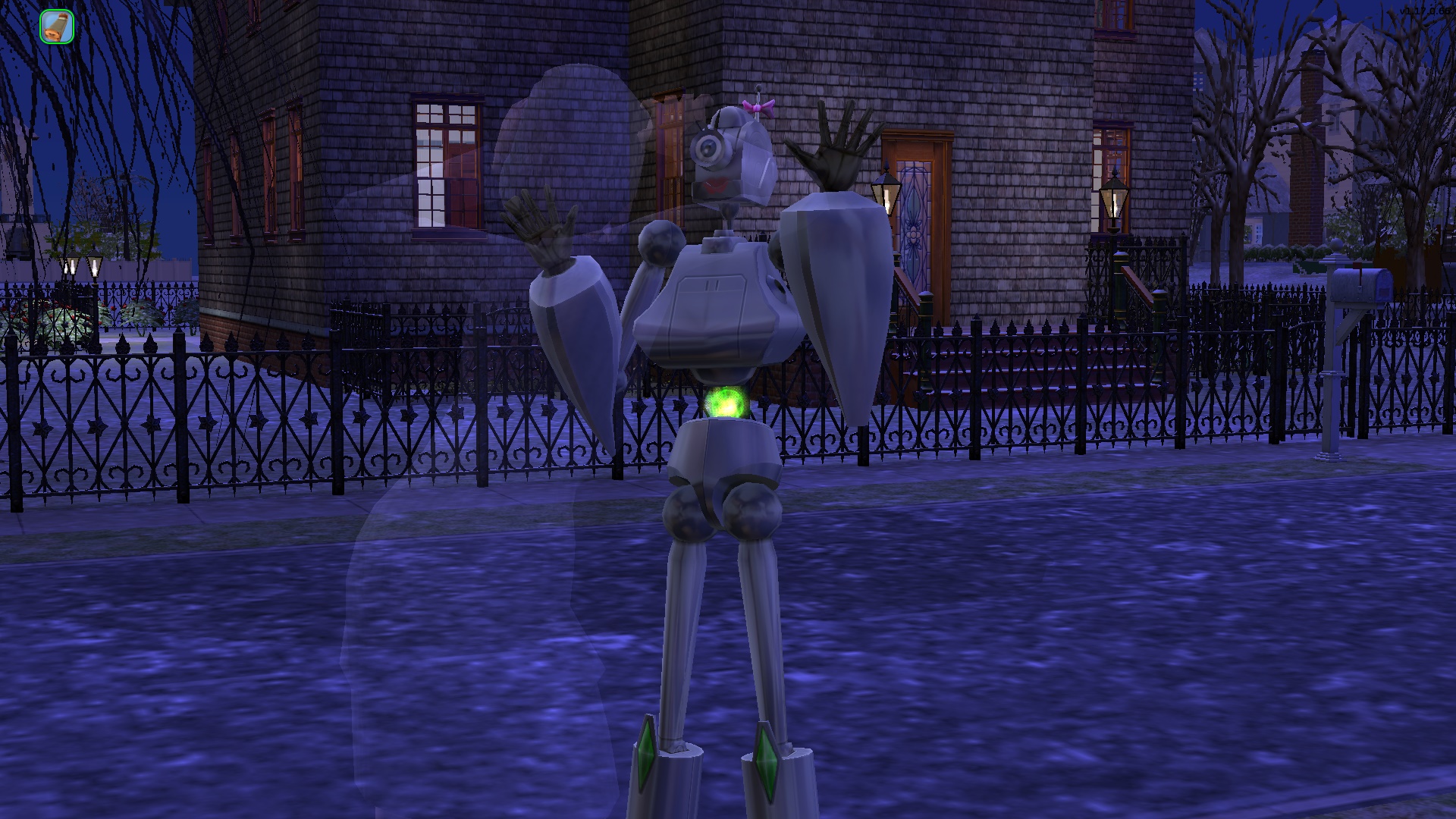 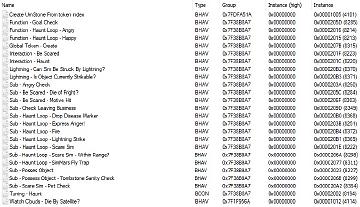 252 Thanks  Thanks     78 Favourited
UPDATE 8: This update allows ghosts once again to possess tombstones/urns. I had disallowed this feature because sometimes it can lead to tombstones/urns being deleted. I believe I found the reason why this happens, and this update should fix this issue. You shouldn't have tombstones/urns disappearing because of being possessed by a ghost from now on.

UPDATE 7: In UPDATE 2, I fixed an issue with ghosts trying to react to fires. I am taking this feature out of this mod, as I have added that feature to my new Fire Mod.

UPDATE 6:
- Active werewolves and Bigfoot are affected even less when they are scared by a ghost.
- Disease ghosts at anger level 1 were more likely to drop disease markers than those at anger level 2. This is fixed.

UPDATE 4: Fixed a motive-related oversight from the previous update.

UPDATE 3:
- There is a new add-on for this mod now called Better Ghosts - AddOn - SpouseFix. I mentioned in the original description how sims born in-game and CAS-created sims are unable to get angry if their spouse remarries. This add-on fixes this and makes it so that ghosts will become angry if their spouse has remarried. Only new ghosts will be able to get angry, though. Ghosts that already exist in your game will only become angry in this situation if they are pre-made Maxis sims who already have a spousal relationship. UPDATE 1: I found out that Maxis runs a private line of code for Cowplant death. This update makes it so that Cowplant ghosts will also get angry if their spouse remarries.
- Electrocution ghosts will now restore the power motive of nearby Servos, as they float.
- Servos are more likely to run amok if they are scared by an Electrocution ghost.
- Active werewolves' and Bigfoot's motives are decreased less when they are scared.
- Flies ghosts will now decrease the hygiene motive of nearby sims, as they float.
- Sunlight ghosts will now decrease all of the motives of nearby vampires, as they float.
- Hail ghosts will always be at angry level 2 if it is hailing outside.
- Rally Forth ghosts will always wake sims up who are in the same room, they don't need to be angry to do this.

UPDATE 2:
- If a sim's tombstone has been kicked or urn smashed, the game will always set the ghost's anger level to 2.
- I found out that if a ghost is not currently interacting with any object, the game automatically deletes the ghost and shows the notification "The sim has died on another lot". The reason this happens is because the game expects ghosts to always be interacting with an object, namely the Haunt interaction on their tombstone/urn. The game does not allow ghosts on the lot if their current interaction is not the Haunt interaction. I found one way that a ghost can be taken out of this interaction, and that is when there is a fire going on nearby. The fire emitter attempts to push every sim to react to fire, even ghosts. This update adds a ghost check to the fire code and prevents ghosts from being pushed to react to fire. Note that there may be other situations in which the game pushes ghosts to react to certain things that they shouldn't which then stops ghosts from haunting.

UPDATE 1:
- Ghosts who have become angry as a result of the Nice personality chance can now express their anger visually.
- Vampire Servos have a higher chance of running amok if they are scared by a Coffin-scare ghost.

This mod fixes quite a few serious problems with ghosts, and also adds new abilities to many of the ghosts in the game.

FIXES
- When a ghost starts scaring a sim, the game hides the ghost for a few seconds and then makes them visible again when they scare the sim. Right when the ghost scares the sim, the game changes the ghost's colour to white (Old Age) even if the ghost is a different colour. Towards the end of the animation, the game sets the ghost's colour back to its original colour. This is now fixed. The ghost's original colour is now preserved at all times.
- Nice and Neat ghosts would sometimes be pushed to make a mess, but what Maxis wanted to do was to make Grouchy and Sloppy sims to make a mess. This is fixed.
- Grouchy and Sloppy ghosts would sometimes be pushed to clean an object, but what Maxis wanted to do was to make Nice and Neat ghosts to clean objects. This is also fixed.
- The "Move Grave" interaction wasn't properly working, because the ghost would end up losing their death type upon being moved. This is now fixed.
- On community lots, the game seemingly randomly deletes ghosts while they are haunting, preventing ghosts from properly haunting. The reason this happens is because the game pushes visitors (ghosts are considered visitors at all times) to leave the lot if the maximum visitor number is reached. At that moment, the game sets the ghost's greet-status to 2, which means "leaving". Maxis added a line of code with OFB which makes it so that the game constantly checks to see if the ghost's greet-status is 2, and if so, it deletes the ghost automatically. They added this to make ghosts leave immediately when a sim closes their business, so that sims can go home if they are on OFB community lots. But, they didn't bother to add a check to make sure that this code only ran on OFB community lots. This is now fixed, and ghosts can haunt normally on community lots.

CHANGES AND NEW GAMEPLAY
- The maximum number of ghosts allowed on a lot has been increased from 3 to 5.
- If the ghost is in range of an object that can be possessed, they always possess it if there is no one to scare. Now, there is a chance that they will possess the object, so they may keep floating around.
- Cowplant ghosts constantly interact with a cowplant if there is one on the lot. Now there is a chance that they will interact with a cowplant, so that they can do other things like scare sims or possess objects.
- In an unmodded game, angry ghosts turn on stereos and TVs if they are close. This mod makes Electrocution ghosts always turn on stereos and TVs if they are in range, even if they are not angry.
- Ghosts automatically wake sims up if they are in the same room in an unmodded game. Now, only angry ghosts will wake sims up.
- Ghosts cannot haunt tombstones any more, as sometimes this causes tombstones to get deleted.
- Disease ghosts can now leave disease markers as if they are actually sick. Sims who come into contact with the disease marker will contract a Mysterious Disease. The disease will be more contagious and severe depending on how angry the ghost is.
- Lightning ghosts can now strike sims with a lightning bolt if the sim is close. The chance is low.
- Fire ghosts can now set sims and flammable objects on fire if the sim/object is adjacent. The chance is low. Fire ghosts are more likely to set their enemies on fire if the target is a sim. If the target is an object, the chance is increased depending on how flammable the object is.
- In an unmodded game, ghosts will always scare a sim if the sim is in range. Now, there is a chance that ghosts will scare a sim. The chance depends on the ghost's LTR towards the target. The lower the LTR, the higher the chance. However, Fright ghosts always have a very high chance to scare sims if the sim is in range, and Coffin-scare ghosts also have a very high chance to scare vampires if the vampire is in range.
- When a ghost scares a sim, the sim's motives will go down depending on how angry the ghost is. Motives will be affected more if the ghost is a Fright ghost. Motives will be affected a lot more if the ghost is a Coffin-scare ghost and the target is a vampire. If the target is a Servo, there is a low chance they will run amok. Servos cannot die from being scared.
- Satellite ghosts make it more likely for Cloud/Stargazers to die from Satellite if the ghost is in the same room and close to the sim.
- Maxis made it so that ghosts can't become angry on community lots. Ghosts can only become angry on residential lots, and only if one of the following conditions is met:

- Hungry ghosts become angry if there is no fridge.
- Any ghost becomes angry if their favourite object is deleted (usually a bed, but can be easels and so on, too).
- If the current family living on the lot has a different family number than the family number the ghost had when they were alive.
- There is one additional check to make ghosts angry: if the ghost's former spouse remarries, the ghost is supposed to get angry. This feature is not properly coded. The only sims who properly get angry under this situation are pre-made Maxis ghosts that are set the "Spouse" familial relationship with an alive, pre-made Maxis sim. This is because, when a sim dies in-game, their spousal familial relationship is immediately deleted. Sims born in-game, and your CAS-created sims will never get angry under this situation.