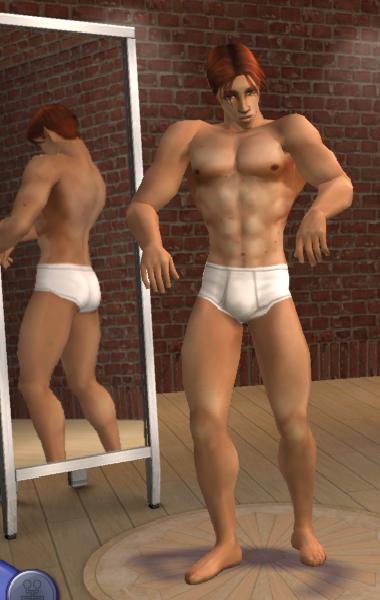 133,203 Downloads 3,334 Thanks  Thanks 205 Favourited 611,870 Views
Picked Upload!   This is a picked upload! It showcases some of the best talent and creativity available on MTS and in the community.

*02-08-2005: the neck was edited to better fit the rest of the body, and the uv-map was improved. The files should be re-downloaded, and will overwrite the former ones.

After 2 months of testing on the adult forum, here he is

First, many many thanks to :
- Beosboxboy for sort of issuing a challenge I couldn't resist, and then pushing me further,
- Wes_h for his Bodychop plugins and for being such a great person,
- Dr Pixel for testing and explaining things so clearly and patiently on countless threads - in fact, I purely and simply stalked him, because almost each of his posts is a small tutorial in itself...

- the people who tested this mesh and encouraged me all along.
Without their enthusiasm and helpfulness I wouldn't have gone very far in this project!

The story : Beosboxboy made a fantastic but high-poly mesh that he couldn't get to work in game, and rather than totally giving up he uploaded it in case somebody was willing to use it. So, the only way I found was to use it more or less as a mould for a low-poly one.

And if you don't want to see him reverse to the regular sim body under the shower, I found a way to keep the shape when nude : the skintones uploaded here are linked to matching nude meshes (top + bottom), and work as not default nudes, using the four Maxis colours; only the sims using those skintones will appear muscular when naked.
If you wish to use other textures, you can clone them as usual in Bodyshop, the new custom skintones will be linked to the same meshes.


This version is still not perfect, I think the animations can be improved.

I'm also open to any and all improvements suggestions - what I'm planning and/or already working on :

- Since I messed up the morphs (in fact, Milkshape did) I had to triplicate the main mesh, so this guy won't change appearance when fat or pregnant... I'll have to remake the morphs from scratch, and I'm not too eager about this right now.

You're welcome to make recolours and post them where you want, as long as you link to this thread for the meshes, and credit Beosboxboy and me.

I realized that many of my uploads still contain policy files that are outdated, contradictory, and sometimes plain silly; I'll hopefully find the time to fix this someday, but meanwhile please refer to this instead:

- All my files on MTS2 can be included in your FREE uploads with a link to the original thread or my profile.

- If you want to clone or reuse parts of my work, please ask, I don't bite (... any more ;))! And be aware that some of my stuff, like the spiral stairs, would likely need a little additional information unless you know exactly what you're doing.

- Of course no need to ask if you want to recolour my stuff, still I'd appreciate that you let me know so I get a chance to enjoy your work.