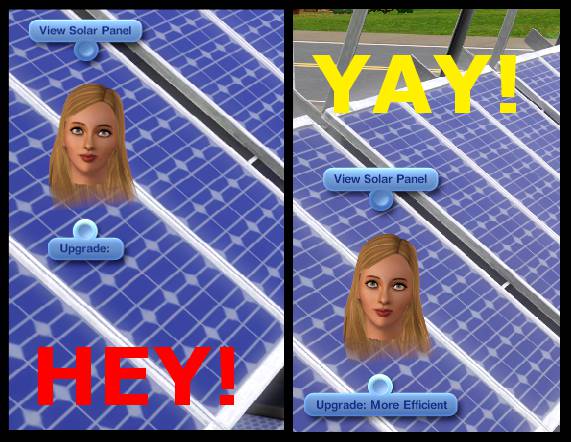 Created by Buzzler
View Policy / About Me View all Downloads
Uploaded: 29th Oct 2010 at 3:48 PM
Updated: 15th Mar 2014 at 1:06 PM
This tiny little mod is a fix for the missing upgrade name string on the upgrade buttons of solar panels and windmills. usage
There is no ingame interface and no notifications will be shown for this mod. The mod only adds the missing key to the dictionary that stores the upgrade localization keys.

compatibility
Supported for base game version 1.67. Will probably work on all game versions, though. Mind you, you're on your own if you try this mod with any other than the supported game version.

disclaimer
Might lead to a serious case of squished brain. Your game should be safe, though.
Files Need help with downloading or installing content? Click here!

See: Game Help:TS3 CC Basicswiki for a full guide!
Also Thanked - Users who thanked this download also thanked:
Moar Interactions
by Buzzler
Remove stencils/overlays from build/buy/CAS objects in game (edited 01/16/2014)
by velocitygrass
Scribbling Pad
by Buzzler
Excavation Site Hotfix
by Buzzler
Treasure Box *Compatible with 1.67*
by treeag
Save the Environment Driving Eco-Friendly Cars
by Sims MX
Store All Fish and Harvestables at Once *Compatible with 1.67*
by treeag
The Box Of Seeds
by Buzzler
Outdoor Lighting Tweaks v2.2
by dDefinder
Mood Hotfix (with optional harder mood flavor)
by Buzzler
Packs Needed
None, this is Sims 3 base game compatible!
Other Information
Type: