Fixed and Updated "Working Bulletin Board" 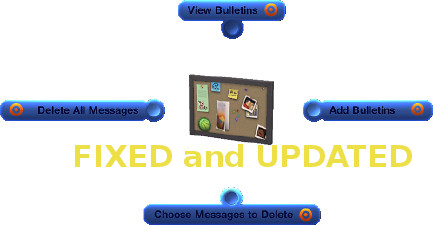 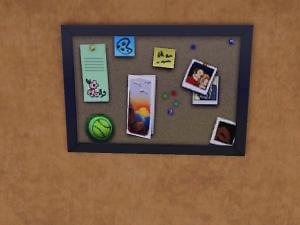 First and foremost, I want to say that as far as I'm concerned all credits for the mod should stay with its
original author, rothn (this also means that his creator's policy applies), I've only fixed and updated a bit
his wonderful work trying to change as little as possibile of its concept and simplicity (no animations,
not even routing toward the billboard, etc). If he will ever come back and ask for it, I will delete this entry
and hand him out the sourcecode of my modifications.

You can find the original mod HERE.
One of the patches of the game conficted with it and so it became unusable (actually it freezes the game if
you select the object from the catalog or freezes the loading of a savegame if the object was already there).

Technical information: the issue was that the namespace of a class for a scripted object must start with
"Sims3.Gameplay.Objects". Just "Sims3" seems enough, but I think the former has become a convention.

Hi,
My name is Arsil and I'm addicted to parenthesis.
(chorus) Hi Arsil!

This mod was developed and tested with game version 1.67, but I think it will work with any version
or at the very least with every version following the one for which the original mod worked. Damn it!
I don't think that last sentence made a lot of sense. Please confirm/deny in the comments for which
game versions the mod works (and how I should have phrased that freak that came out of my keyboard).

The mod turns the clutter corkboard available in the buy mode of the basegame (in the decor/misc section)
into a working bulletin board: clicking on it a radial menu pops up and you can choose to:
- add a note
- see all notes
- remove some notes
- remove all notes

In addition to fixing the mod, the following features were added:
- copied english strings to all missing languages
- added italian localization
- bulletins/notes were made persistant (they'll still be there when you load a saved game,
while before they were lost when you exited the game)
- every bulletin board now has its own notes (while before all boards shared the same ones )
- new notes will have the signature of the sim who added them (very handy if you have multiple
personalities or if you fancy a bit of roleplay switching from a sim to another).

I could have added some animations or at least routing to the corkboard, but I wanted to
maintain the KISS principle used by its original author (Keep It Simple, Stupid).
Besides it seems to me that an immediate interaction (no delay, no routing fail risk, etc)
is better suited for this kind of mod, even if hurts a little the immersion in the game
(you know, suspension of disbelief).

Additional Credits:
All the respective authors of the programs, tools and tutorials for modding TS3.
MTS and all modders who made the game much more enjoyable.
Buzzler for helping me to figure out why the original mod stopped working.
Files Need help with downloading or installing content? Click here!