by scumbumbo Posted 15th Nov 2014 at 6:28 PM - Updated 7th Aug 2015 at 3:51 AM by scumbumbo : Updated for July 9 game patch
February 06, 2020 - Scumbumbo has passed on but his work and memories are still being kept alive by many of those whose lives he has touched. To download fixes for his mods, please check <a href="https://scumbumbomods.com/">https://scumbumbomods.com/</a> and please direct any questions or concerns to his discord channel linked there. 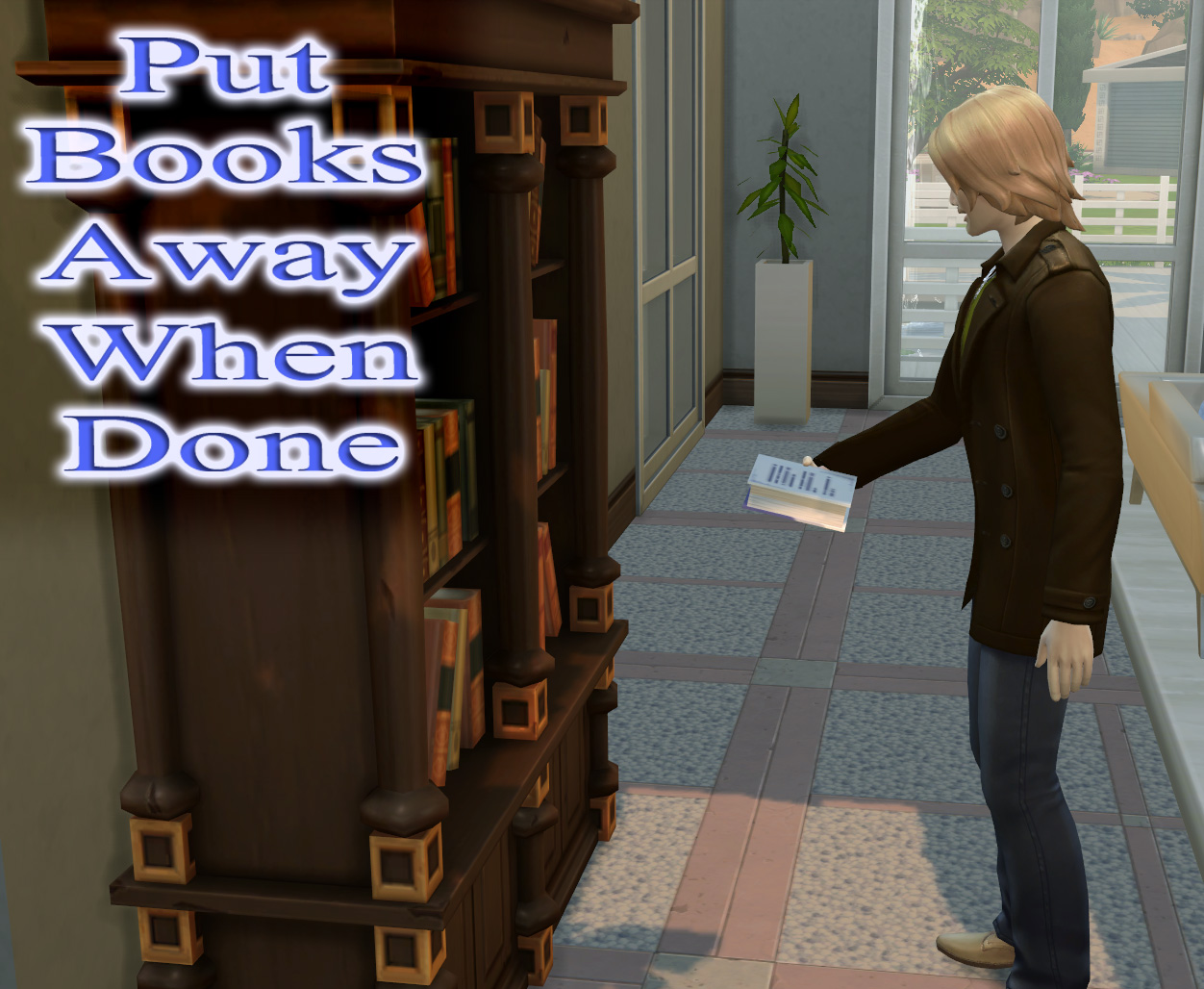 Updated July 11, 2015: The mod has been updated to version 6 for compatibility with the July 9, 2015 game patch. This is a suggested, but not required, update for users with the latest game patches as it updates the script with additional error checks. Starting with version 6 the mod's script is also contained in the new "ts4script" file format and can no longer be automatically installed with the Mod Manager. Simply place both files from the zip file you download into your mods folder.

You will still need to ensure that scripts mods are enabled in your game options and, as always, if you update the mod, be sure to delete the old version!

This mod will queue an action to put a book back on the shelf once a sim has finished reading. If the sim cannot find a bookshelf close enough that is available, they will place the book in their inventory. In addition, if the Place in World action is chosen for a book in the sims inventory, they will instead put the book on an available bookshelf.

This mod is a bit different than most as it contains both a standard package file and a script mod. Both must be installed for the mod to work properly, but the installation isn't all that complex.

Make sure that scripting mods are enabled in the game options (on the "Other" tab). Be sure to check this setting after updating the game for a new patch, as if you don't turn off the show mods at startup option the game will disable scripts after an update is installed.

If you need a reference for how this should be setup, see my Keep Instruments In Inventory mod and there is a screenshot there of a similar installation. Without the script portion of the mod, visiting sims or sims on community lots can pick up books and steal them!

If you wish, the package file can be placed in a subfolder, but the zip file must go into the main Mods folder.

This mod may conflict with any other mods that modify the strategy for reading or putting down books or other objects. It is compatible with the Keep Instruments In Inventory mod.

As this modifies the generic strategy for putting down any book, it should continue to work for any new books added to the game.

This modifies the following XML resources:
There is also a script:

Additional Credits:
Big, BIG thanks go to Velocitygrass for the Sims4XmlExtractor and, of course, Kuree and all the others at Sims4Group who have put together the S4PE tool.


Download only one of the versions available. Make sure your game is patched to the requirements for the mod version you are using.

Need more information?
Back to download view
102 Comments / Replies (Who?)