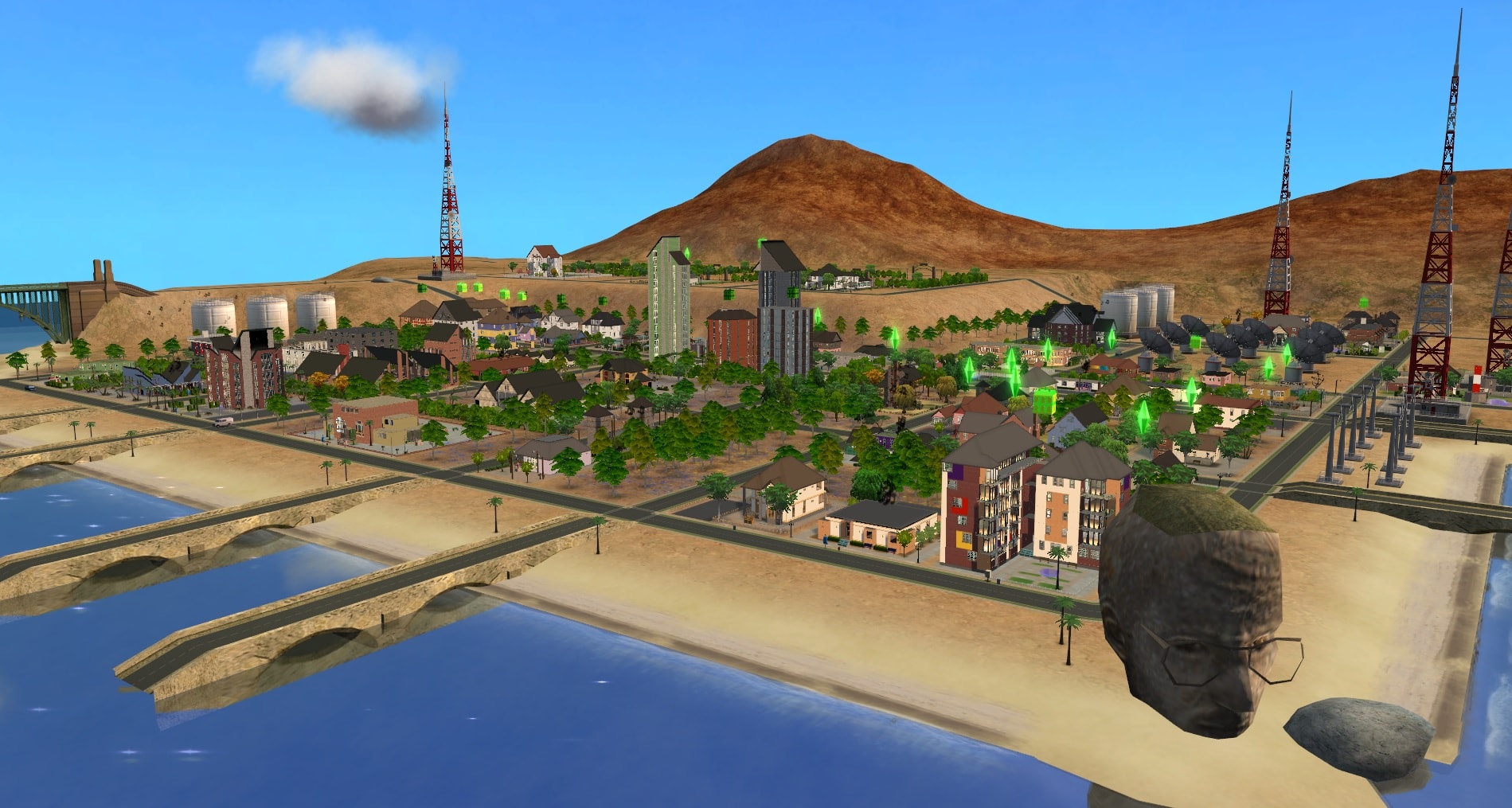 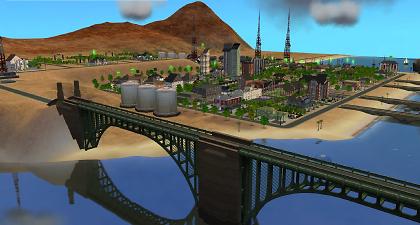 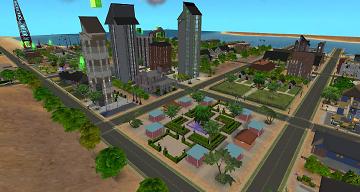 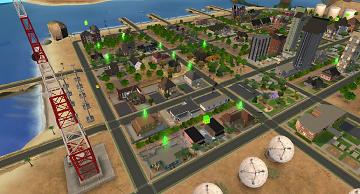 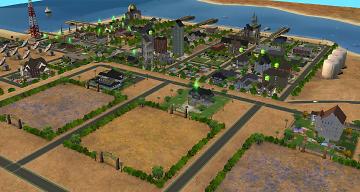 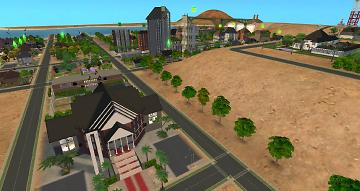 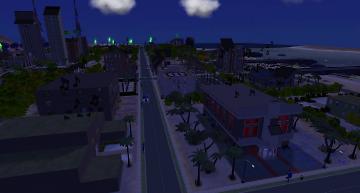 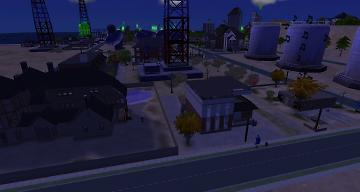 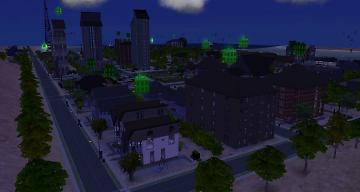 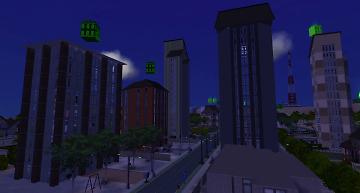 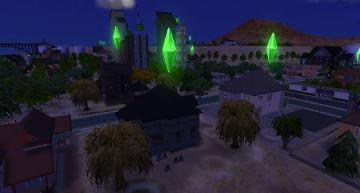 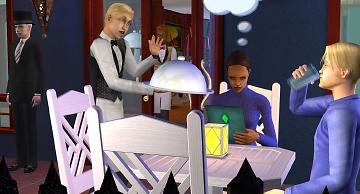 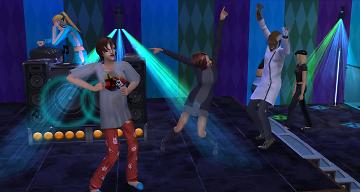 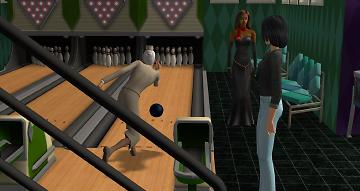 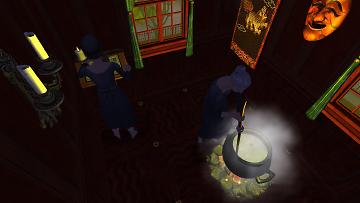 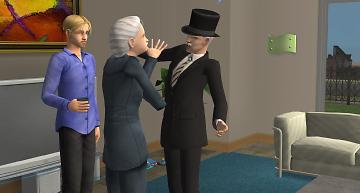 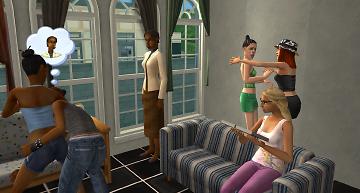 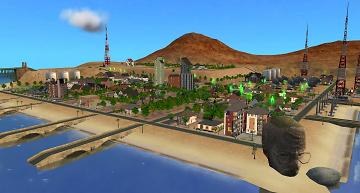 First of all, we'd like to apologize for our absence! It's been about two years since we last uploaded a neighborhood... we're sorry for that! Things got busy and all... but now, we're back with a new neighborhood AND a new member, Tamas! So... welcome to the group, Tamas!

Remember the poll we made back in April 2015 about what custom neighborhoods you would like to see created next?
The result was a tie between Sci-Fi and City Life! Now, we've finished one of them.. and the Sci-Fi neighborhood is already in the works, so stay tuned for more neighborhoods to come!

However, this neighborhood project was a special one, as we've put so much group effort in it! When we first started with it in May 2015, we had the impression that Emerald Heights was such a huge project, it seemed to take forever to complete. But now, we finally did! We thank you all for your contributions! You all have been a great help to us, especially Peni Griffin, Jojoa777 and M.M.A.A.!

Now, we're proud to present you the FINAL version of Emerald Heights! 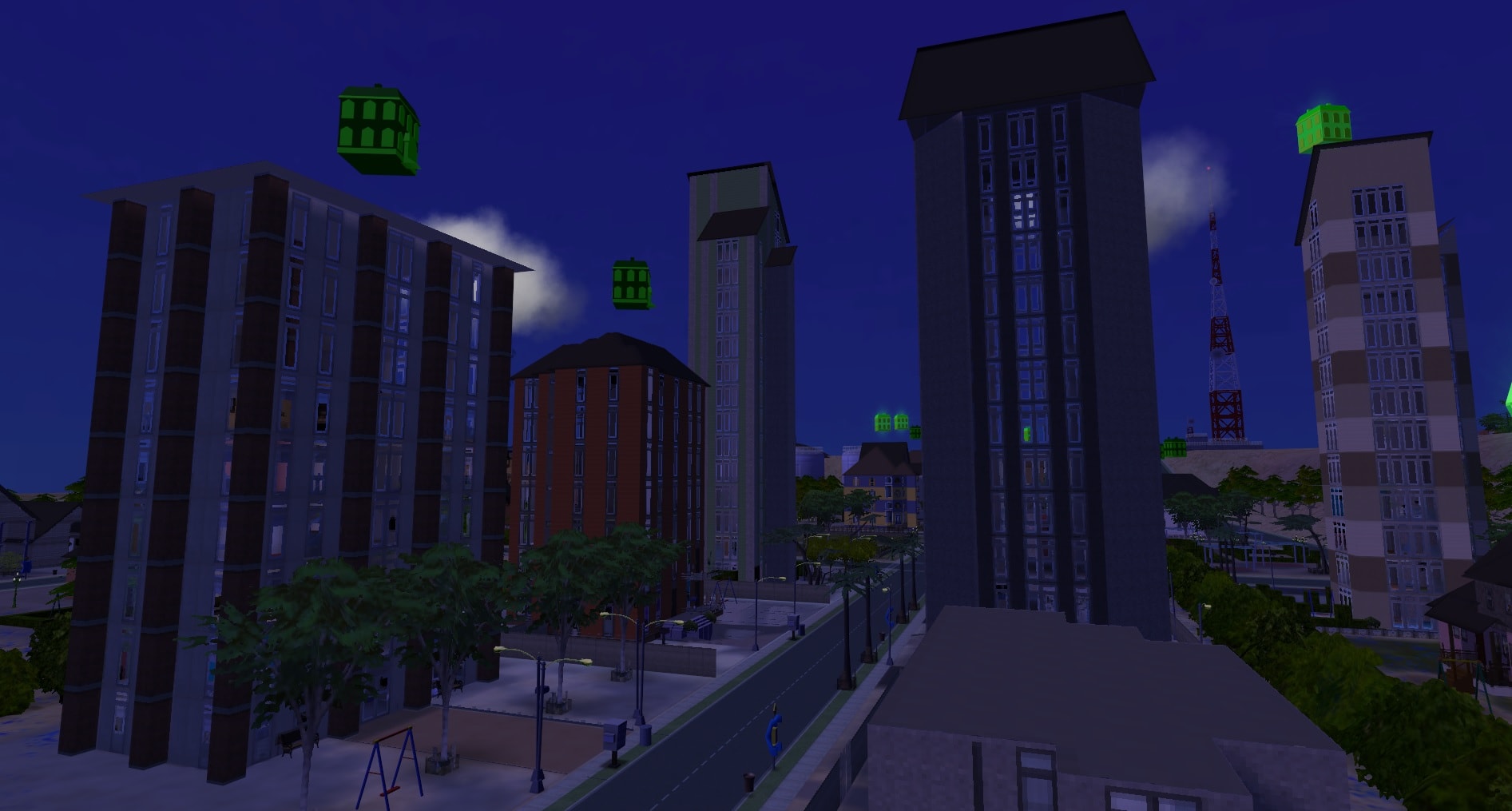 Install Instructions for the Main Hood Version:
1. Put the folder EH01, EH02, EH03 or EH04 into your Documents\EA Games\The Sims 2\Neighborhoods folder.
2. If you only have the Base Game installed, you will have to copy the contents of the Storytelling folder into your Documents\EA Games\The Sims 2\Storytelling folder in order for it to function properly. Later EPs do not have this requirement.

In order to use the subhood templates, please take note of the following:

However, if you don't have Pets or a later EP/SP installed, you can temporarily remove Downtown (D001) from the NeighborhoodTemplate folder and move this subhood in there. It will still be referred as Downtown in the game. But the game will add Emerald Heights to your neighborhood. Restore D001 after adding the subhood and you're done.

A warning about the downtown version:

By default, only the first downtown added to a neighborhood will have its sims. All other downtowns will be empty. So, if you add Downtown first, then you won't have the Emerald Heights sims. They will simply be deleted - and, as you know, EA doesn't delete the sims properly - the junk references can be seen in SimPE. In order to solve this issue, please try this method.

However, if you plan to add only one populated downtown to your hood, you won't need to use this method.

A warning about alien pregnancies:

Due to an EA bug, alien pregnancies in subhoods don't transfer properly. The father NID is actually correct after adding the subhood; the game updates it but while loading the lot, the game thinks the pregnancy is not updated yet and updates it again which is why the father NID will mostly be the wrong one (ie. ending up being Therapist)

This is a game bug and is not related to Emerald Heights. Affected is one sim -- Knight Blaque!

This bug can be fixed with mods such as SimBlender or InSimenator (Reproductive Adjustor). Alternatively, it can also be fixed in SimPE.
To fix the alien pregnancy in SimPE, please follow these intructions:

1. Open SimPE and click on the menu Tools-->Neighborhood--> Neighborhood Browser
2. Select your neighborhood then click "Open"
3. In the “Resource Tree” scroll until you see the Neighborhood memory record, click it in the resource list, then from the Plugin View choose the Blaque family.
4. Select Knight Blaque.
5. There, scroll until you see "Controller - Pregnancy"
6. Click on it and go to "RawData"
7. There you can see the father NID record. Change the current NID to PT's NID. (NID is the same thing as the sim's Instance Number - you find it in the far right column in the Sim Description list.)
8. Commit your changes and save.

Have a look at the Download section for more information. Of course, there's also a Base Game compatible version of Emerald Heights.

Note: Because of a bug regarding subhoods with occupied apartments, we had to move out the affected families in the Nightlife + Apartment Life subhood version (DEH3).
Some the families, who're actually supposed to live in apartments, are found in the family bin. After installing the subhood, you may move them back in, though, and use either the debug option or Pescado's apartment hack to rent the apartments furnished.

Have a look in the comments to find out where they're supposed to live.

Because Emerald Heights is a urban neighborhood, there also are lots of households! We've included 20 of them.

Some are easy to play... some of them are a little bit challenging, taking the Group Home as an example.
Some got into financial issues, some live in comfort and luxury... some households consist of 1 single sim only... one household consists of 8 sims... you see, we've got a lot of diversity to offer!

All families should come complete, with 5 Storytelling pictures each in their family album and with memories! Even the townies and the NPCs, which have spawned during development, have memories, so you may want to download a mod that lets the memories stay at move-in.

By the way, the graveyard comes with pre-made resurrectable ghosts!

However, one of them is a child ghost... we recommend you to keep her there. Child ghosts on residential lots have been reported to become glitchy, while on community lots, they are fine.
Of course, she's safe to resurrectable like any other ghosts.

Have a look in the comments to find out more about the lots and the families in Emerald Heights!

Oh and feel free to post your stories in threads like What did you do with the Emerald Heights characters?.
We can't wait to read your stories.

Emerald Heights has been created using Numenor's AnyGameStarter with no Maxis content. Meaning Emerald Heights was completely empty before we added the sims.
As usual, all of the lots have been compressed using Mootilda's Lot Compressor to reduce the file size of this huge neighborhood.
The neighborhood's been checked through Mootilda's HoodChecker and no issues were found.

Numenor for his AnyGameStarter which we used to make this neighborhood base game compatible and empty.
Mootilda for her Lot Compressor which we used to compress all of the lots in the neighborhood, as well as for her helpful HoodChecker (to see whether there are any problems or not) and for her tutorial How to Create a Custom Subhood Template
Sophie-David for his Buyable Aspiration & Career Rewards for Lot Builders
Compressjpeg.com for compressing the size of the required images for the download page.
MTS for being such a great website
EA/Maxis for developing such a great game
The makers of SimPE

And last but not least, a big thank you goes to all of our contributors ... but in particular Peni Griffin, Jojoa777 and M.M.A.A. you all were the most helpful people in this group project!

Contributors who include:
applesauce58, CatherineTCJD, EmeraldFalcon, HugeLunatic, Jawusa, M.M.A.A., marka93, Peni Griffin, Redtwoface, simsfreq, tcbandie10, Jojoa777
Thank y'all for donating your lots! Without you, we'd have never got so much diversity in one single neighborhood!

And of course, a big thank you goes to everyone who posted in the Creator Feedback forums, as well.