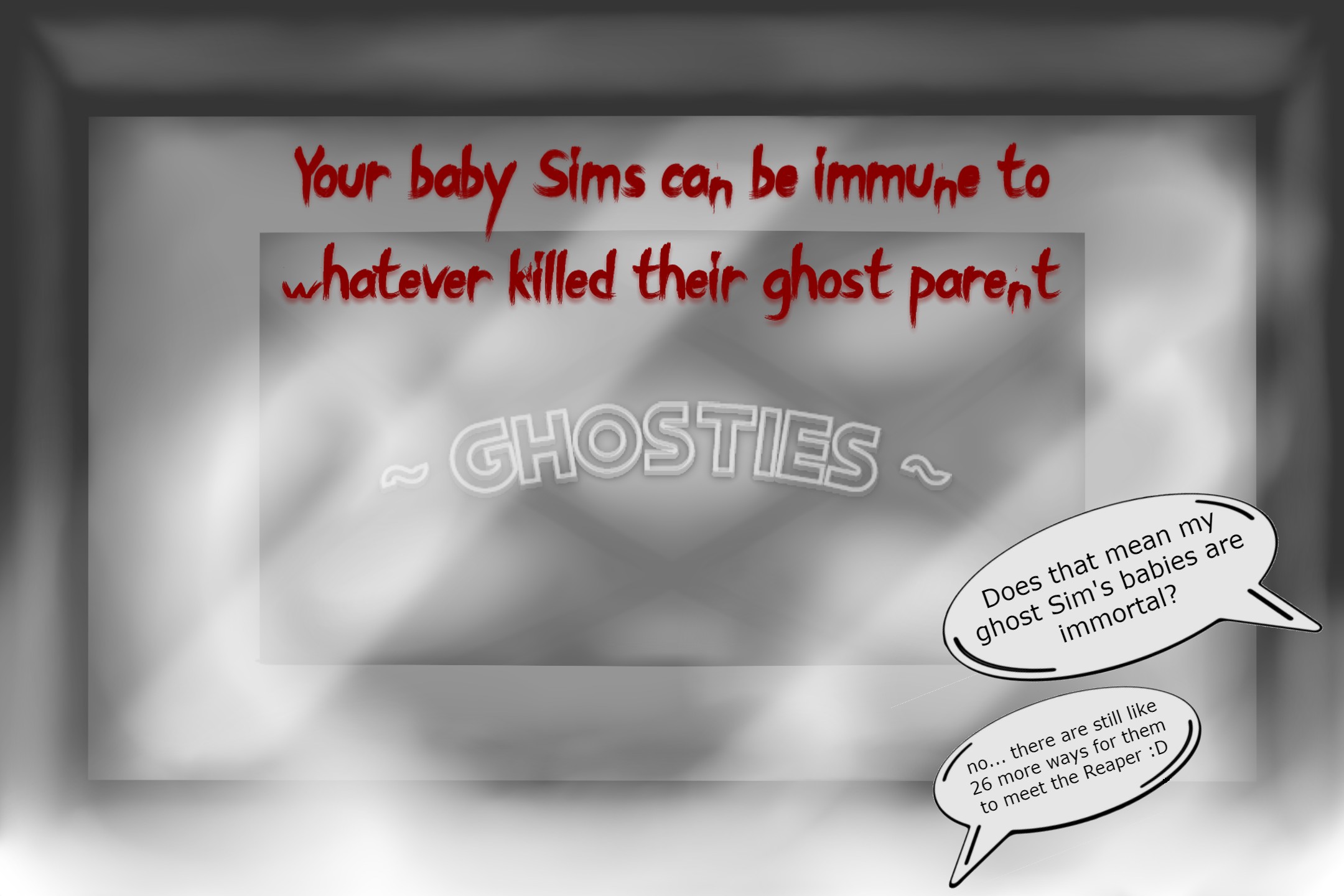 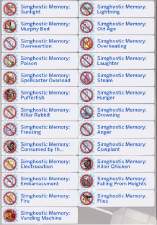 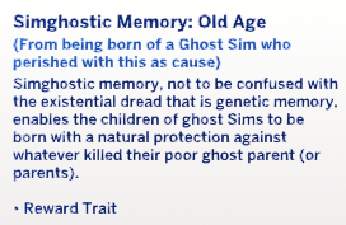 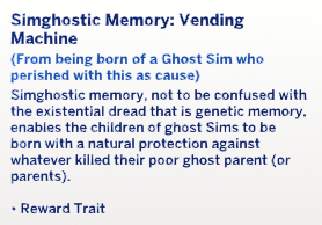 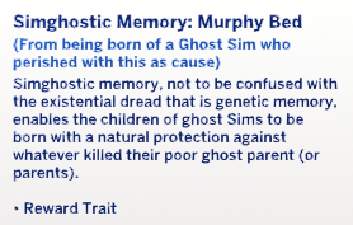 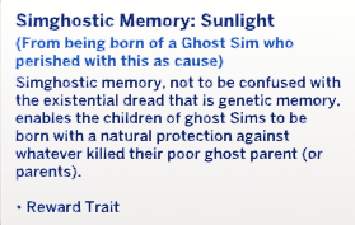 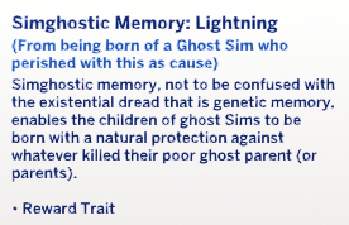 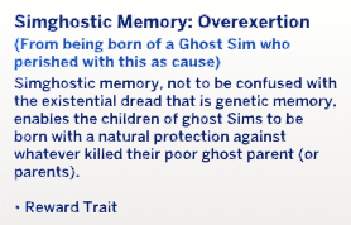 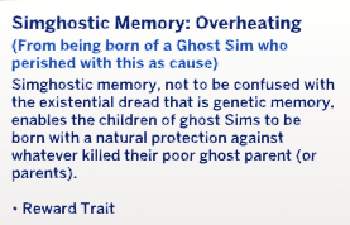 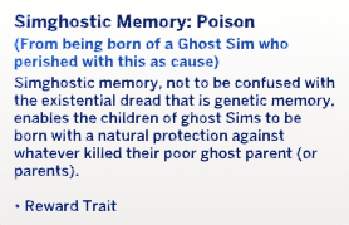 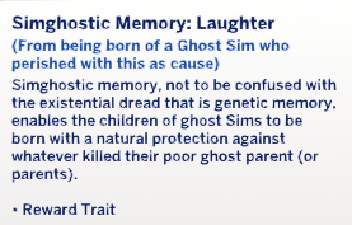 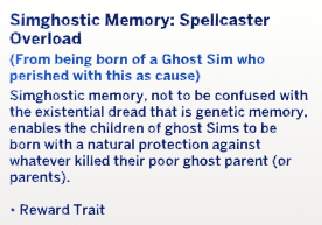 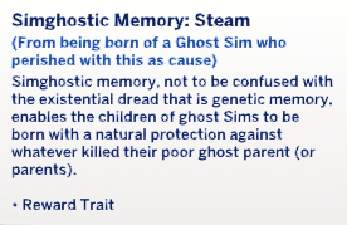 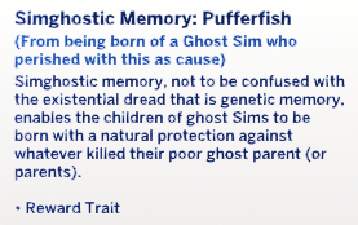 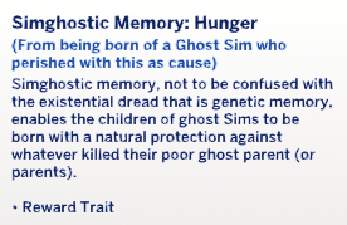 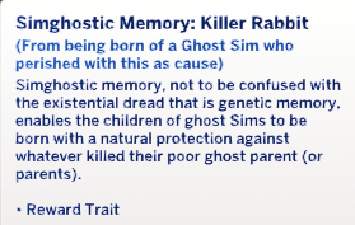 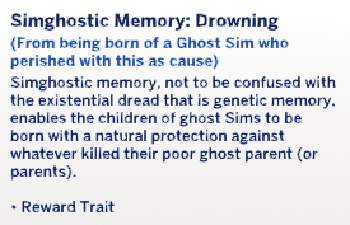 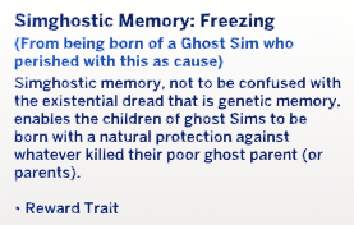 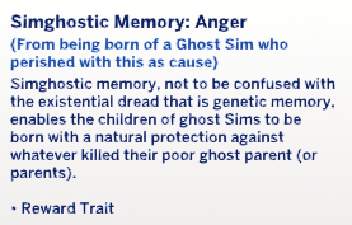 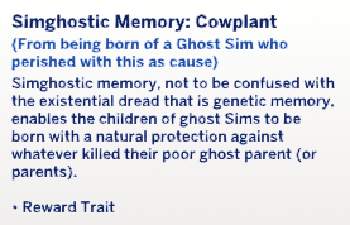 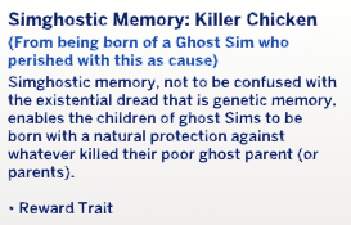 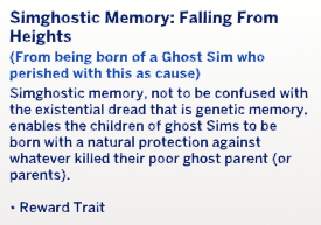 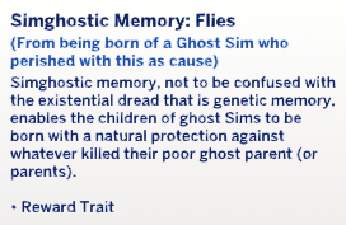 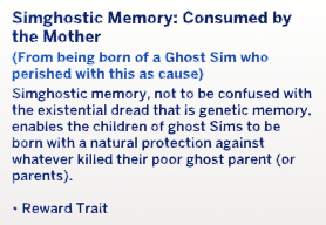 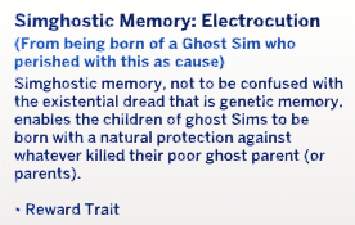 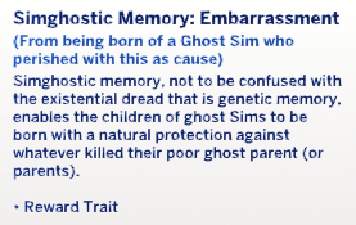 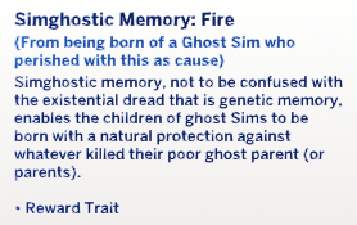 
Because of course we need even more Occult content! This was technically requested both on MTS and tumblr, by which I mean I was asked to make "something" for ghosts, be it bloodlines or something special like the NPC traits, but at some point during the development process I ended up with the possibly-cursed idea of overly-specific death-immunity. You see, since every ghost type has its own trait, bloodlines would be a mess, especially if accounting for every possible overlap!

So instead I decided to go this route: the offspring of your ghost Sims will be immune to the specific death type their ghost parent felt victim to! Note that the parent will need to be a ghost at the time of your baby's birth for this to take effect. The game will not care if they were formerly that kind of ghost, only if they currently are. This mod also will not enable fertility for ghosts, you'll need to use whichever pregnancy-related mod you prefer for that.

This mod requires MAL22's Trait Tracker Injector, and will not work without it.

This mod is also Base-Game-Compatible, but contains additional packages for the ghosts that come from packs, so delete those if you don't have the relevant packs!

So, what else do you need to know? Well, given the game's restrictions, each death-type had to be handled individually. Understand that while I'm certain I've made the death itself impossible, if external factors start the death interaction, your Sim will be removed from household and marriages may be cleared, forcing you to re-add/re-marry them. This should not happen often, seeing as I put measures into place to hopefully prevent this, but for the sake of avoiding conflicts with other mods I had to work around the possibility of deaths rather than alter the interactions themselves.

Each death that can be prevented by a Simghostic Memory trait and how it works:

Excluded Ghost types:
Each Simghostic Memory trait conflicts with its ghost counterpart, to act as failsafe in the event of the death interaction triggering as previously mentioned.

Q&A:
Future plans?:
I need to finish the Demons mod, I know. I promised like 10+ demons and soul-selling, yet only the 2 from my WIP release are done, and I know exactly how I intend to do it, but I have whatever the modding equivalent of writer's block is right now.

Languages:
Note to translators: Strings are on their own package! So if you want to translate the mod, you no longer have to check through every package. <3

Will conflict with anything that edits death_ElderExhaustion_DeathFlower, though considering how that death wasn't even on the list of ghosts in the wiki, I don't know how many other mods might touch that.
Other Information

You need the STRINGS package as well as those of any packs you own. All packages are labeled, so delete those for the packs you don't own!