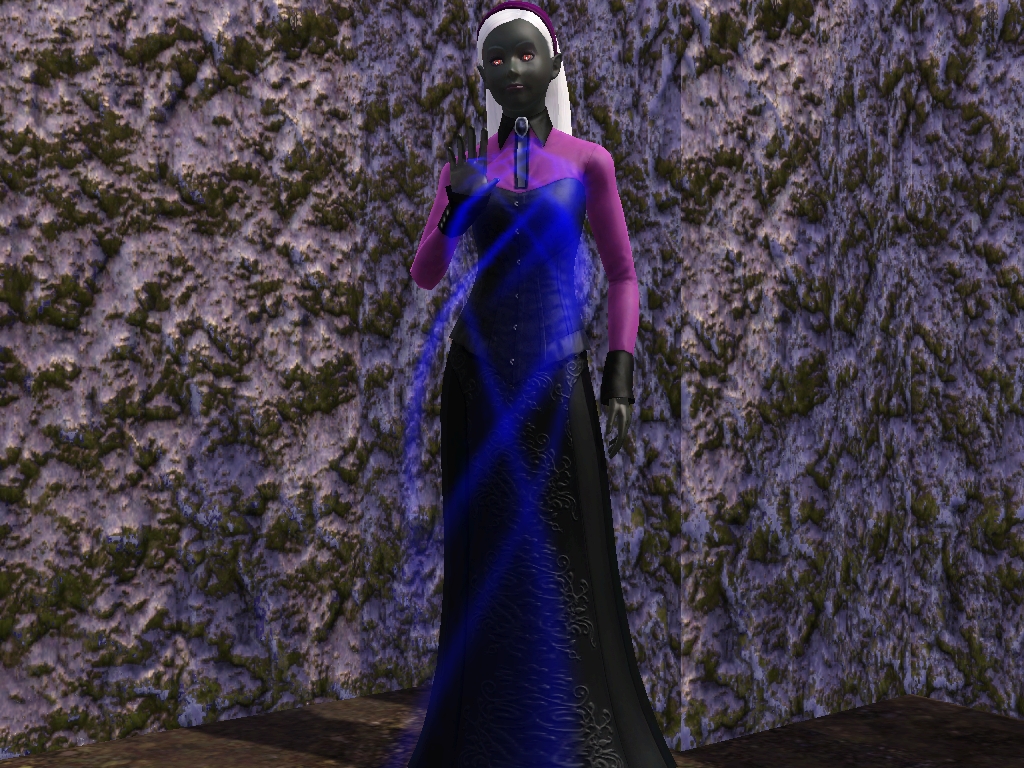 Object Info
Amulet (looks like a golden coin with a black spider symbol)
Existing basegame mesh, retextured. Vertices: 44. Polygons: 40. Non-complatable.
The amulet is found in the BuyCatalog in: ByFunction/Entertainment/Misc

I think there is a way to make an object live draggable even on community lots or
on not owned residential lots, but ATM I don't remember how. As alternative, I could
make the amulet pickable, so you could put it inside a tomb-like place and have a little
quest to retrieve it. I'm not telling you how to play the game, it's merely a suggestion.

Mod Description
This is a set of powers that you can assign to certain Sims.
Only teen+ Sims can use them because I didn't want to make the children version of the animations.
There's no chance to fail when using a power.
There is no learning and no progression, all powers are available from the start.
But who can use these powers?

This would have been the perfect time to use a custom trait made with CTM (Custom Traits Manager),
but I know that people are scared of using it (and I can't blame them) because uninstalling a
custom trait it's a tricky business and if not done correctly the savegame can get corrupted
(the more I think about it, the more I'm convinced that a dedicated console command
should allow to safely, easily and quickly un-install a custom trait or skill).

So, I've decided to use an object (the amulet) to filter who can use these powers:
Sims who have the amulet in their inventory can use them. As simple as that.
Note: I've made the check on the amulet optional, you can disable it (then all teen+
Sims will be able to use the powers) and maybe you can create a custom trait
with CTM and use it as required trait defining filters for all interactions of this mod.
I won't do that myself, I'll leave it as exercise if there's someone interested.

List of Powers
There are 7 powers, none of them is particularly original and there are many overlaps with
aliens, fairies and witches.

Autonomy
Sims will use the powers autonomously. Except floating because it's not advertised
(wasn't really happy how that turned out and didn't want to see Sims use it randomly).

Sims in a angry mood, Evil and Mean Spirited Sims will use bane and poison, unless the target
already has the FeelingUnlucky or nauseous moodlet respectively, but only on Sims they
have a negative relationship with. Good and Friendly Sims are less likely to use them.

Good and Friendly Sims will use bless (if target doesn't already has the FeelingLucky moodlet)
and heal (only if target has one of the moodlets that the power removes) but only on Sims
they have a non-negative relationship with. Evil and Mean Spirited Sims are less likely to use them.

I guess it wouldn't hurt to also add some incentive to generic Sims to use them, like a little
advertising on the the Social motive for the social powers and Fun motive for the object
related ones. That can be done from the ITUNs. If I update the mod I'll do that myself.
There is the Energy consumption concern though, so you don't want Sims to use powers
autonomously too often. Also, both AlienRepair and FairyRepair aren't advertised
(the former only urges Sims with the Handy trait to use it).

More Informations
I called the mod Mental Powers (as in psionics powers) because I wanted to find a middle
ground between fantasy and sci-fi, but while making it I definitely veered toward the fantasy
genre. It should not be difficult to re-fluff them as super powers for comic-like heroes or
something more futuristic (the amulet could be an advanced technological device that...
I don't know, you fantasize!). The amulet could be any object, as long as it uses my script
(Sims3.Gameplay.Objects.Arsil.MentalPowersAmulet) and can be live dragged so
you can put it in a Sim's inventory.

Note: for how the mod works (applying and removing a VisualOverride to have glowing eyes
while using a power), Sims will lose their tan (feature of Seasons EP) after using a power.
Other kind of Sims who use a VisualOverride (genie and alien) won't have glowing eyes
while using powers (if they don't already have them, like werewolves and vampires).

Note: using powers drains the Energy motive. This was inspired by the alien powers and
I've kept the same message about lacking brain power when Sims don't have enough
Energy in order to have the localization already done for all languages.

See the CONFIGURATION xml for tweaking the mod and re-fluff the powers through localization.

I used the same targeting rules of witches' spellcasting, so no pets, no bots,
no merchants, no not-socializable Sims, no some service Sims, etc.