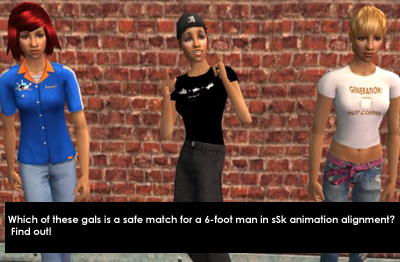 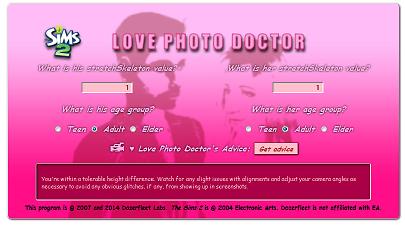 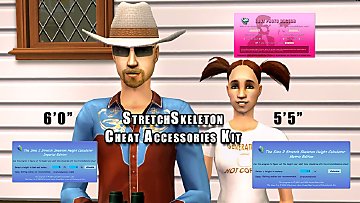 143 Thanks  Thanks     49 Favourited
Historical context

One of the most popular items I ever released back in the heyday of Sims 2 was the StretchSkeleton Cheat Calculator. It came in three basic flavors: VB.NET Imperial, VB.NET Metric, and QBASIC All-in-One. There was also a tool for QBASIC called the "Animation Advisory." The set was downloaded thousands of times, meaning many loved using it to double-check the height equivalencies of Sim ssk values to real-life measurements.

The early versions were also based on Lexx and Wolfgeek's algorithms. But there were some problems:

Welcome to the new web-ported version of the set. Any major desktop OS should be able to run it, provided that OS can also run desktop mode formats of most modern web browsers. If you're nostalgic for my old calculators, these web ports will allow you to relive the memory - even embed it on your own web pages! Windows, Mac, Linux, shouldn't make any difference anymore.

This set has not been tested for mobile phones, nor do I recommend them being used for mobile devices. If you can get a mobile or tablet to run them, great. But I make no promises of good performance for mobile.

This new version of the set has been tested for compliance with recent versions of Firefox, Internet Explorer, and Safari, with the only issue being Safari not interpreting a gradient correctly and substituting it with solid blue. Apps have not been tested in Opera nor Chrome; but it is assumed that Chrome will operate these the same way as Safari.

Update: A set of webkit patches have been added. If you use Chrome and Safari and the gradient issue bothers you, simply replace the #imperialbody and #metricbody ID line definitions in your CSS with the patched versions provided in these text files. The look of the calculators should then be fairly consistent in all browsers.

In the Imperial calculator, you enter the height and inches you want your Sim to be. It shouldn't make a difference what age they are. In Metric, you put in how many meters you wish them to be. Hit "Calculate," and you get their sSk number.

If you want two of them to hug or kiss, and for it to look good in screenshots, use the Love Photo Doctor to determine if it would look good or not. Tweak their sSk numbers in your game until their height differences are within acceptable margins, then reset them to their proper sSk numbers when not physically touching another Sim.

This is the Imperial Units version, having been re-worked for HTML5.

This is how the Imperial version looks when the CSS is tweaked for embedding on Tumblr. 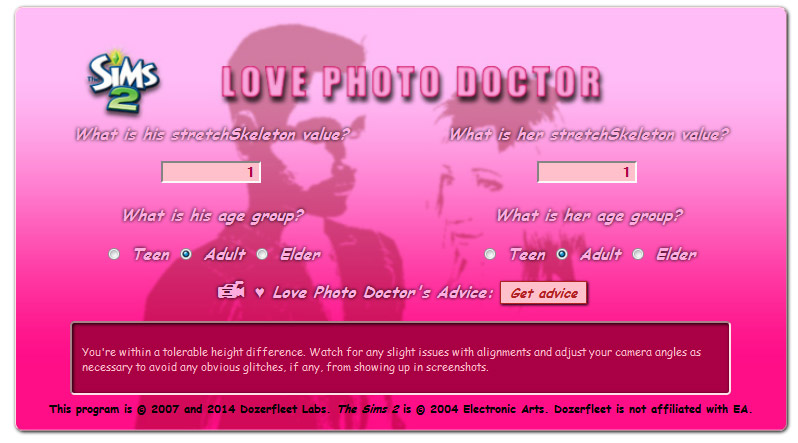 About the Love Photo Doctor

The Animation Advisory is now known as the Love Photo Doctor, to better demonstrate its intended purpose. It still operates mostly the same as it did in QBASIC, but has an HTML5 interface now and uses CSS for style rules and JavaScript rather than VB.NET for processing logic.

Note: The Love Photo Doctor's language assumes you are combining a male and female Sim monogamously to hug or kiss each other. Other arrangements and relationships are up to you. In such cases, just take the entries "his" and "her" as suggestions. Repeat permutations as many times as necessary for love triangles/dodecahedrons/whatever. App is not intended for use on children and pets.

This new web ported set comes with a total of six calculators, three that are resource-dependent and three that are standalone HTML pages. The standalones, or "resource-independent" files, are for when you just want to move one file into place and open it in a tab in your browser and have everything work. The "resource-dependent" models are for those who wish to copy and embed the widgets, and want the most DOM-compliant setup possible.

Being "resource-dependent" means that images are separate files rather than embedded as base-64 data; and also means that style and script rules have been outsourced to CSS and JS files separate from the HTML.

If you have a fansite and wish to embed, please copy the source code and modify only as needed to make everything fit the parameters of your page or post. Include credit and a link back to this page or to Dozerfleet Labs.

To install, simply use your favorite extractor program (WinZip, WinRAR, IZArc, etc.) and place the folders where you want them. Open up the HTML files into separate tabs in your browser. Save the tabs as bookmarks, and they should be ready to call up at a moment's notice.

If embedding onto Tumblr, adjust the CSS as-needed to make it work. Make sure to include basic structures, CSS, and JavaScript for style and scripting rules. Do NOT include the shortcut icon, the doctype DTD, the meta, the head, the body, nor the HTML elements, as this could confuse Tumblr and mess up your page. For embedding on other sites, check to see what the parsing protocols are and if they will allow custom CSS and JavaScript. Uploading images, if possible, is recommended over embedding base-64 code - which can get quite massive.

Additional Credits:
Special thanks goes to A Blue Star for the Base-64 Converter for URI images, without which the standalone versions of these calculators would be impossible.