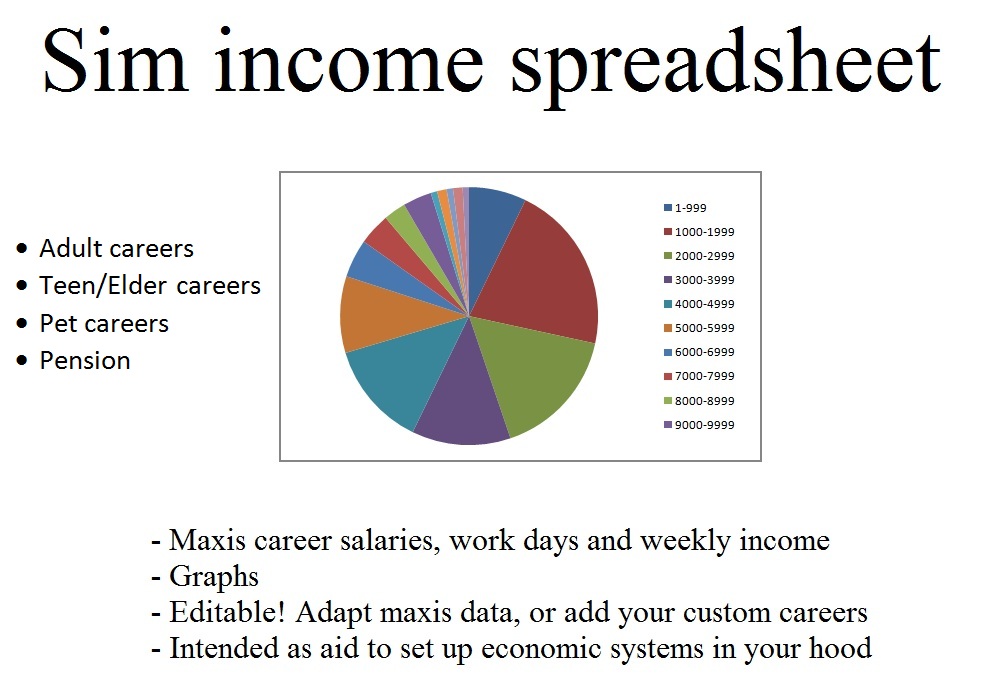 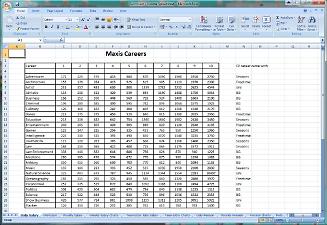 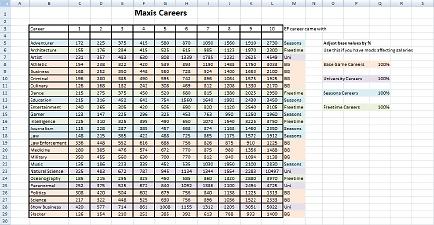 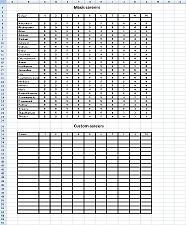 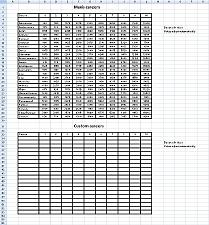 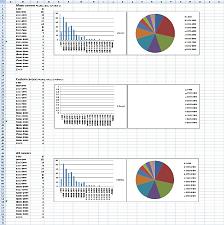 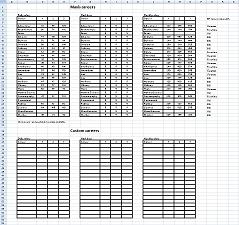 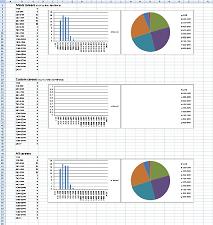 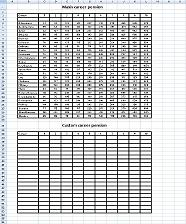 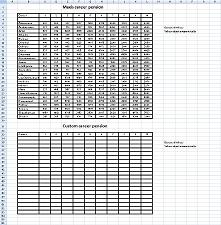 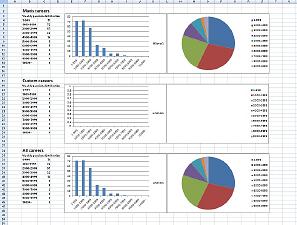 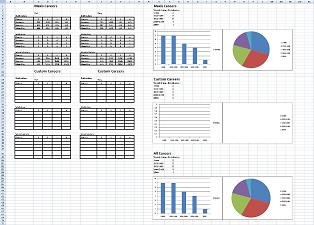 79 Thanks  Thanks     14 Favourited
Update: Data on number of work hours, and hourly wages has been included. All data now based on English installation.

For update information - See Update Log at the bottom of this text
-------------
I have a somewhat strange upload for you all today, but I hope it'll prove useful to more people than me. I enjoy adding a more complex economy to my hoods than what Maxis ships with, and as I was getting ready to figure out taxes I felt I needed a better view of how much money Sims actually make.

I set out to figure out what the weekly income is for all maxis careers, and from there it's gotten bigger and bigger. Once I had the data, I wasn't sure how to display it in a way that told me what I wanted to know. A good friend of mine helped me move the data to excel, and display it in a simple chart. It seemed like something that would be helpful to more people than me, and so I decided to keep working on it and share it with you guys.

I give you the Sim Income Spreadsheet. I have tested it extensively, but as there may be things I've missed, this is considered a beta version.

What is it?
It is an Excel spreadsheet, with various tabs. It lists daily income and number of work days per week. It uses this data to calculate the weekly income. It also displays weekly income in brackets, with charts, to give an idea of how it's distributed. The data covers all maxis careers (adults, teens/elder, pets). On top of number of work days, it also displays work hours which it uses to calculate hours per week and hourly wage. As suggested by Peni Griffin, it also includes pensions.

In order for this to be truly useful, I felt it had to allow customization. There is room for 20 custom careers for adults and teens/elders, and 6 for pets. All you have to do is enter the daily salary, the number of work days, and if you want to, work hours per day. The rest will be calculated automatically.

Weekly income charts are available for maxis careers, custom careers, and both together. That way people who only use custom careers won't get maxis data interfering, and those who use both can get collective data.

Some people also use mods that alter the wages from Maxis careers. After lots of brainstorming, and trying to figure out how to best adapt this project to that possibility, I have come up with what I hope is a good solution.
1. Daily salary and workdays can be edited, allowing you to change them if they are different in your game. Base value data for income is found on the last page of the spreadsheet.
2. On the daily salary tab, you can decrease base values by a set percentage. I believe most people with modded wages use Cyjons Lower Wages, which lowers them by a set percentage, so that's why this function exists.

I've done my best to show you in pictures what this is about, but if you are interested I strongly advice downloading it and looking at it yourself. It's one of those things that's hard to do justice in pictures.

What is it good for?
I originally made it for me, as an aid to figuring out the economy of my hood, but there are lots of other things it can be used for.
Are there any downsides?
For some reason, career data varies with game installation language. Thank you k6ka for helping me figure this out. This spreadsheet is based on the information on the Sims wiki, which is based on an English installation. If your game is not in English, your careers may vary slightly. Both salary and number of work days can vary. You can edit these things to match your game if you want to, so if you find something that does not match you can adapt it to your game.

I haven't figured out a way to incorporate promotions into all this. Does not have data for Sims employed in an OFB shop.

You will need a program that opens Excel files, such as Microsoft Office. See below for more details.

Things you should know
Why are there two files? Which one do I get?
Previously I offered two different versions of this, intended for different kinds of wage-altering mods. But it became such a hassle for me to update two files simultaneously that I decided to combine them into one. You should download Gummilutt's Income Spreadsheet - Percentage moddable.

Further explanations on specific sheets
While I strive to make this as self-explanatory as possible, some of it may be a little confusing.

Hourly Wages tab
-> The idea behind this sheet is to make it possible to determine which jobs give the most/least money compared to time. For example, if you have a Sim that you deem as lazy and uninterested in work, but still interested in money, you could use this to try and figure out which job gets them the most bucks in the least amount of time.
-> Hourly wage by day is simply daily salary divided by work hours, but since different jobs have different number of work days I felt that was not enough information. Hourly wage by week divides the hourly wage by day by the number of work days. What it gives us is a sort comparative number that describes money earned in relation to time spent at work. The number itself is irrelevant, what matters is how it compares to the other numbers. For example, both level 10 Natural Science and level 9 Show Biz work 21 hours per week, but Natural Science gets you more money in that time period, and therefore it has a higher hourly wage by week. Intelligence level 10 which gets you the most money per week, has a much lower number than Natural Science, because your Sim has to be at work more hours. It's not a perfect measurement, but it can give you a hint of which jobs require the most effort/least effort to bring home the bucks.
-> As a general rule, a high number in hourly wage by week means your Sim earns a fair amount in few hours, and a low number means not much money and more hours at work.

Credits
- My good friend Panda, who came up with the idea of charts and made the original version of this. Thank you for taking the time, and for teaching me how to do this myself. This spreadsheet would probably not exist if he hadn't sparked my inspiration.
- My dear father, who helped me bring my ideas to life by showing me how to execute them within the excel format and researching how to when he didn't know either. This spreadsheet would probably not have gotten made without his help.
- SimWiki for data on careers. While it does not match my installation since mine is in Swedish, it is a great source of information and has very clear easy-to-read information about careers.
- Microsoft Office, for the tools used in this spreadsheet.

Thanks to
Panda and my dad for being such good sports. And thanks to all of you. Even if nobody ever uses this, I had fun creating it and I learned a lot about Excel in the process. I'm a bit of a statistics nerd, so having an excuse to fiddle with numbers is always great. And while this may seem like a simple thing to make, it's probably the most time consuming project I've done so far. I'm proud of the end result, and if it weren't for wanting to make it as user-friendly and as good as possible for you all, it would not have come out like this

Random trivia discovered while creating this


- Yearbook Club Supervisors make the least money of all maxis careers (level 1 journalism)
- Show Business is the most profitable career. It makes the most money of all maxis careers at level 1, 2, 3, 4, 5, 6 and 10.
- Cats get far more money than dogs, for every single job.
- Pensions are based on weekly income, not daily.
- Promotions sometimes give less money per week, due to less days of work.
- All teen/elder jobs except adventurer level 4, have 5 work days per week.
- All pet jobs follow the same pattern for work days at a specific job level
- SimWiki data on work days should not be trusted.
- Journalism and Law are the most workoholic of careers, with 5 days of work on every single level.
- While cats get more salary than dogs for the same job, pensions do not differ. And pensions are based on dog salary, not cat salary.


2015-07-01 Minor update to Gummilutt's Income Spreadsheet - Percentage moddable.zip. I realized I forgot to remove excess parts on the base value sheet. Aesthetic fix, won't affect function. Up to you if you want to grab the new version or not.

2015-07-01 Pet pension data added. Forgot pets could retire, sorry about that. Maxis code on calculating pet pensions does not appear to be available, so I can't make it calculate them for you. I've filled in maxis data, but for custom careers you'll have to fill in daily pension yourself and it'll do the rest. If I can figure out maxis code, I'll update it and make it automated.

2015-07-01 All pension data updated. I found a mistake in the pension calculation formulas, please re-download for correct display of pensions. Pet pension calculations have now been added, and will fill in automatically based on salary and work day data.

2015-07-02 Tired brains should not try to fix mistakes. If you downloaded this in the last hour (currently 12:10am UTC time on july 2nd) then please redownload. Various little mistakes here and there have been fixed, including an accidental link between the two versions that may make Excel complain.

2016-04-11 Added work hours, work hours per week, hourly wage and hourly wage by week, so that it is easier to see which jobs gives the most simoleons per time unit, and figure out which careers your workaholic Sims would enjoy most. Updated to English data, if your game installation is in English it should now be correct.