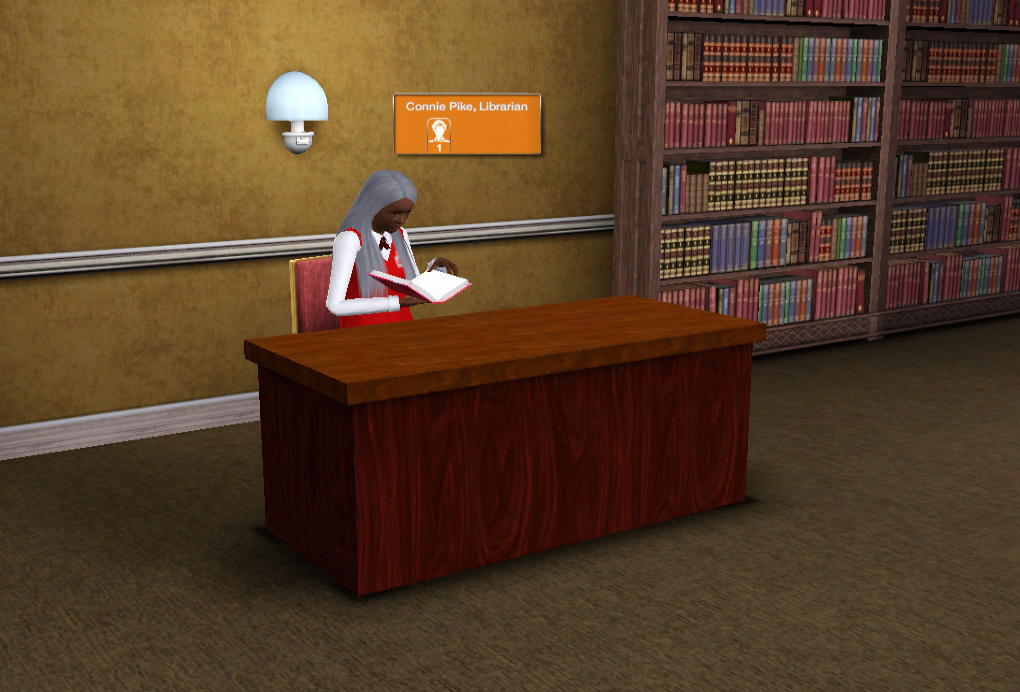 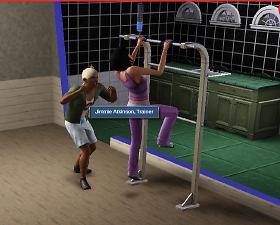 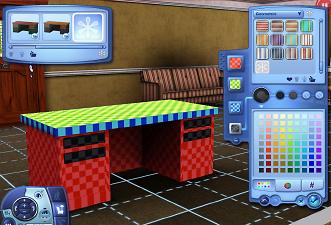 Updates
28th Jul 2015 : Added a second package in the archive with a small floor mark (courtesy of ATS3) to use as role giving object.
Technically that's a desk too (because I'm too lazy to rewrite the code) but hopefully that won't be an issue.

Mod Description
This is a desk to be placed in a community lot to create a custom generic role.
The object has interactions to personalize the name of the role, the working hours,
days off, motives to freeze, if motives will be freezed also if a selectable Sim covers
the role and if the Sim has to wear a career outfit (if he/she doesn't have one, the
everyday will be cloned and then you can personalize it).

The desk is a role giving object, compatible with NRaas Register (not required but recommended).
I didn't specify any predefined outfit for the role, because of its generic nature and also to allow to
choose a custom outfit in case the "wear career outfit option" is enabled (otherwise every time the
role starts the predefined outfit specified for the role would be used).

Being generic is both the pro and con of the role. The pro because it's flexible and versatile, you
can use it for many things, the con because Sims covering that role won't have anything specific
like particular interactions etc, so it's mostly an aesthetic thing and to make a bit more lively and
populated some venues.


Object details
The mesh is based on a desk from UL, I just remodeled/simplified a bit the shape. It has 4 CASTable channels.
High detail mesh : 399 vertices and 285 polygons. Low detail mesh : 287 vertices and 159 polygons.
Where : BuildCatalog/Community/Misc. Price 0. It's only available on community lots.

Keep in mind that I suck at meshing, so probably the object is far from perfect
(look at the channels' screenshot to see some flaws in the texturing).

Why a desk? I guess I liked the idea of a reception desk, maybe with a computer so the
Sim could pretend to work (or browse the web). Maybe it wasn't a great choice, because
a desk doesn't fit everywhere (think about outdoors). The script can be used with less
cumbersome objects (a rug or a poster), but technically the class inherits from a specific
desk (or you couldn't place a computer on it) and that may have side effects if used with
other kind of objects (I don't know for certain, I'm just being prudent).

Examples of use
Put the desk in a Library and set the name of the role to "Librarian".
Maybe give to the Sim that covers the role the bookworm trait so he/she will be able to talk about books
and maybe the neat (or perfectionist) trait so he/she will put away books more likely (just speculation, I haven't tested it specifically).

Put another desk in a gym and call the role "trainer".
If you use NRaas Careers and its module for SelfEmployed careers you can do something fancy here:
assign to the Sim that covers the role the trainer skill based career (maybe you also have to set his/her
athletic skill over some threshold, I don't remember if that's needed) and the Sim will actually train other
Sims (see screenshot). I'm not taking credit for this behaviour, this is all thanks to that NRaas mod feature
and maybe Sims with that career are pushed anyway to go to a gym thanks to NRaas SP, even without the role, I have no idea.

What else? A babysitter in a daycare (maybe in a lot where there's also the rabbit hole for the parent's career)?
A museum curator in a museum? Eric Northman at Fangtasia? A creepy clown in a park? I don't know, you fantasize.

Details
In addition to the working hours, now also days off can be specified (for each single role,
not globally), so for example you can choose to not make a librarian work on weekends.
The interface to choose the days off is pretty ugly (and the code that handles them too).

For each single role, you can specify which motives to freeze while the Sim is actively
covering the role. Choosing to not freeze any (or just some) motives may make things
more interesting because Sims will also have to take care of their needs, so, for example,
if you choose to not freeze the Bladder motive then make sure to put a bathroom in the lot.
Choose to freeze all the main needs and you can specify a inhuman shift (24 hours).

There's also an option to enable/disable the freezing if the Sim is selectable. So, if disabled,
you have to micromanage him/her: for example trying to send him/her to work fresh and with
enough energy to make the full shift

Now the default values of some settings (days off, motives to freeze and freezing for selectable
Sims) are xml tunable, so when you place a new desk it will use those settings. Of course once
you tweak them for a specific desk/role it will save them, this is only when you place a new one..

You can use an active or selectable Sim to cover the role, but keep in mind that the mod - just like
most of the roles in the game - wasn't designed with that purpose. And every time I selected a selectable
Sim that had a job to cover the role, I was asked if it was ok to quit the job and when the role started
a small crowd gathered around the Sim to celebrate (the new job?).

Keep in mind that, like other roles of this kind, IIRC the assignation to the role is "broken" if the Sim
that covers the role, during the "work" timeframe, is invited to a party (or is the host) or if there's a birthday
in his/her household (maybe this only for the active household, I don't remember).
Maybe other things too can "break the link" between a Sim and the role, for instance it happend making the
Sim covering the role the Active Sim switching households while the role was being covered.

I don't remember if you have to do something to protect Sims assigned to roles from Story Progression
actions that assign a career to them (tweaking of NRaas SP options or AwesomeMod's sacred feature).
I play... I used to play with SP disabled so it wasn't a big deal to me while testing.

To change the money a Sim makes covering the role you have to change the generic hourly pay you
see in the main screen of NRaas Register.

Afterword
Those guys who say that they leave and then come back after a few days are so lame, aren't they?
Well, I didn't mean to make fun of anyone saying I was leaving (because I am), I just had this
hopefully last idea for a mod and I had to see if it worked.

Additional Credits
All respective authors and contributors of the tools and tutorials for modding TS3.
MTS and all modders who made the game much more enjoyable.
misukisu for his/her amazing work on custom roles.