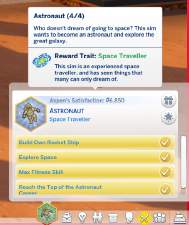 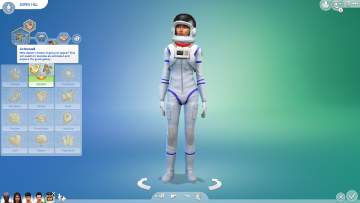 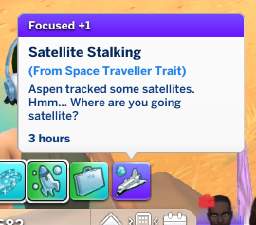 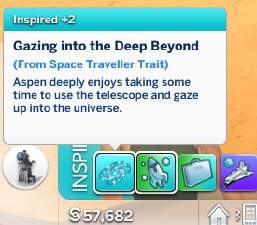 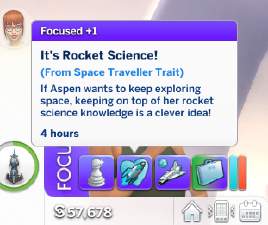 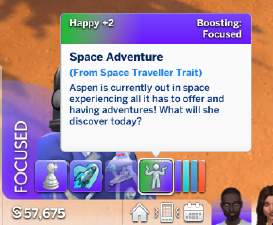 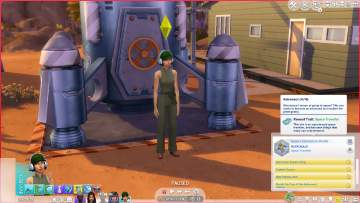 Sims 4 Astronaut Aspiration:
Who doesn't dream of going to space? This sim wants to become an astronaut and explore the great galaxy.

This aspiration is base game compatible.

Found under Athletic Category in CAS.

There are four aspiration levels:

b) Be Focused at Work 3 Times [100 Satisfaction Points]

d) Reach the Top of the Astronaut Career [800 Satisfaction Points]

This sim is an experienced space traveller, and has seen things that many can only dream of.

Being an astronaut is so rewarding, {0.SimFirstName} finds every day at work a new adventure.

Gazing into the Deep Beyond +2 Inspired

{0.SimFirstName} deeply enjoys taking some time to use the telescope and gaze up into the universe.

{0.SimFirstName} worked on {M0.his}{F0.her} chess skills. To be an astronaut, you must keep your logic skill in check!

{0.SimFirstName} tracked some satellites. Hmm... Where are you going satellite?

If {0.SimFirstName} wants to keep exploring space, keeping on top of {M0.his}{F0.her} rocket science knowledge is a clever idea!

{0.SimFirstName} is currently out in space experiencing all it has to offer and having adventures! What will {M0.he}{F0.she} discover today?

{0.SimFirstName} is currently stargazing and is trying to take it all in...

{0.SimFirstName}'s brain is currently full of thoughts of space. There are so many unanswered questions...