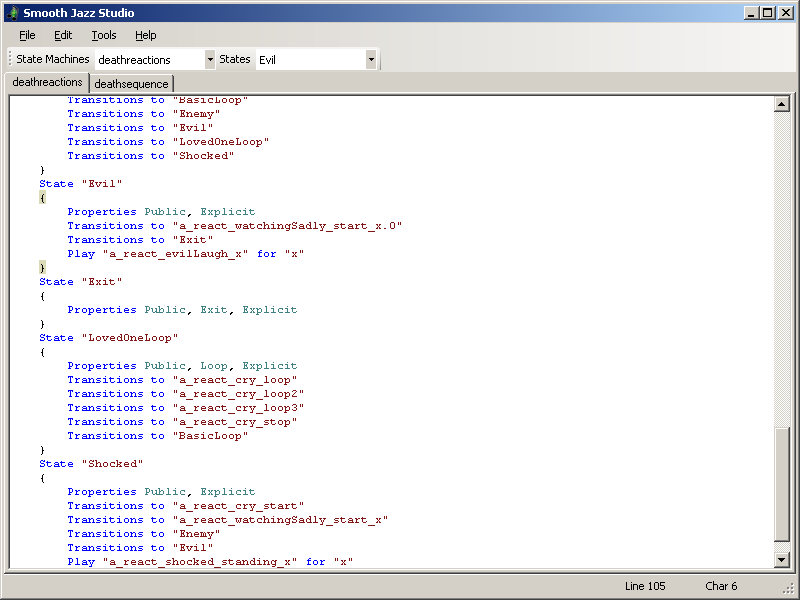 3,161 Downloads 214 Thanks  Thanks 15 Favourited 47,557 Views
Created by TigerM
View all Downloads
Uploaded: 21st Aug 2009 at 11:08 AM
Updated: 27th Nov 2013 at 4:12 PM by Nysha
You've seen it in my two mods. Jazz scripts serve as an intermediate step between the game code and the animation data. They allow some basic level of control of what is played based on various rules, in the form of a finite state machine.

JAZZ SCRIPTS ARE NOT ANIMATIONS. There has been some confusion about what exactly they are, since there is no obvious visible action to the casual observer. The animations themselves are of course visible, and the game scripts obviously exist. But the existence of some amount of logic between the two is not apparent. Jazz scripts are responsible for taking instructions from the game scripts such as "Make sim X eat food Y" and turning it into specific animations for the game to perform on X and Y.

Those two mods were made with a very crude tool with no help and no documentation. However that tool has grown into a more user friendly tool, presented here as Smooth Jazz Studio. While jazz scripts are not animations, they can be used to change how animations behave. Once an animation tool is available, jazz scripts will be very useful for directing how those animations are used without necessarily requiring a core mod.

Features include:
At this point, not all data is understood, so some fields are still presented as unknown values in the language. (If someone can definitively identify what these are, rather than just guesses, it would be greatly appreciated.) However the most common values are silently ignored as a default. For now it is recommended to keep any work in progress in package form, so there is no conflict with future syntax definitions.

Requires .NET 2.0 runtime, or the latest release of mono to run. Lookup of hash values for proper name display requires The Sims 3 data files. If Smooth Jazz does not find the game files automatically, there is an option to specify the game path on the command line, as well as in the settings.

Both packages are the same, JazzInstaller.zip includes a Windows .msi installer, while the other contains just the executable for those who don't care if they have it on the start menu.
Other Information