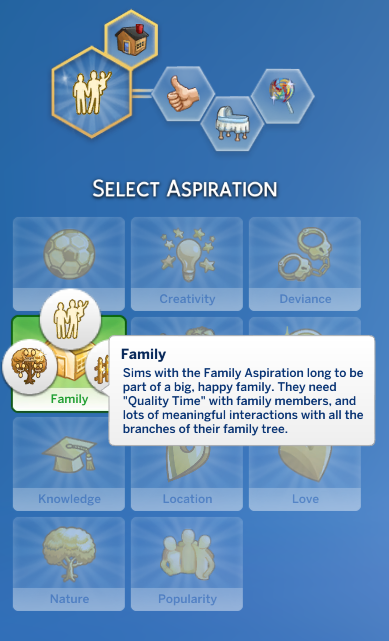 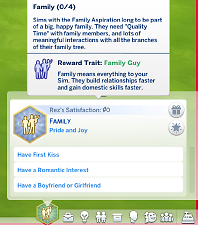 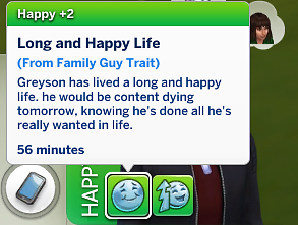 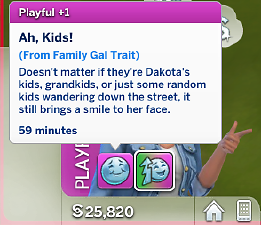 9/19/2020:
-Completely remade this aspiration and I believe this new version is more faithful to TS2.
-The names of the first and last levels have changed.
-This new version can be completed by Sims Young Adult+ instead of every level being tied to age.
-A few of the objectives are borrowed from the BG family aspirations.
-The new version has a large focus on spending time with family, instead of just having a family exist.
-Reward trait renamed from Family Guy/Gal to Town Father/Mother.
-The buffs from the old version return, but only for Elders. No buffs appear for younger sims. (Open to ideas for new ones)
-The reward trait will now give higher fertility. (This required Outdoor Retreat)
-The reward trait will have the Sim's autonomy focus more on family activities.
-This page's description has been updated to reflect this new version and explain it more than this change log.
12/12/2020:
-Added whims related to babies to the aspiration. (the trait had them already)
-Lowered the required number of Children/Grandchildren from 10 to 5.
-Increased the points given for a Toddler reaching level 3 in a skill from 100 to 200.
-The "Ah, Kids" buff now lowers Fun need decay.
-The lower Fun need decay given by the reward trait has been changed from 0.6 to 0.88, the same as it was for TS2.
-Increased the skill gain boost for Parenting from 1.5 to 2.
-Made a bunch of autonomy tweaks to the reward trait.
-Replaced some strings with EA strings.
-Tweaked some strings.
-Fixed 3 interaction based objectives being completed or progressing even if the interactions had failed.


I've remade the Family aspiration from The Sims 2. The original aspiration had 6 levels, but due to limitations the first level was cut and the last became the reward trait. When creating each level I pulled from the name and the original aspiration's wants and lifetime wants. The final product was an aspiration that functions a bit like the Soulmate Aspiration with a focus on family.

The aspiration does give some whims. They are basic things relating to itself, such as Read to a Child, Help a Child or Teen with Homework, Try for Baby, etc.

Shining Example:
*Have a Romantic Interest
*Have First Kiss
*Have a Boyfriend or Girlfriend
*Become an Adult

Family Rock:
*Teach Things to Toddler (10 times)
*Have a Toddler Reach Level 3 or 5 in a Skill
*Read to a Child for 2 Total Hours
*Help a Child with Homework 3 Times

Town Father/Mother Trait:
With this trait, your Sim will get large boosts in the following skills: Cooking, Baking, Gardening, Parenting, and Knitting. A moderate boost in: Gourmet Cooking, Flower Arranging, Photography, and Fishing. And a small boost for Charisma, Handiness, and Mixology. Your Sim will also get a large boost in the Babysitting career and a moderate boost in Gardener and Culinary.

The Sim's autonomy will also be more focused on family activities and will socialize with younger Sims more often, they also build friendship and romance faster. They also will have a fertility boost, but this requires Outdoor Retreat.

The trait triggers 2 buffs for Elders. The "Long and Happy Life" buff is a Happy buff that occasionally appears and will give a boost in Knitting, Gardening, and Cooking along with a boost in the Babysitting career. The 2nd buff is a Playful buff called "Ah, Kids" which will slow the Fun need decay.

The aspiration will give your Sims whims; though none of them are new whims. Basic things, like Read to a Child, Help a Child or Teen with Homework, Try for Baby, etc.

Pride and Joy:
*Have First Kiss
*Have a Romantic Interest
*Have a Boyfriend or Girlfriend

Role Model:
*Be a Young Adult or Older
*Get Engaged
*Get Married

Family Rock:
*Be an Adult or Older
*Have 2 Kids
*Read to A Child

Town Father/Mother:
*Be an Elder
*Hug 20 Times
*Have a Grandkid

Family Guy/Gal Trait:
With this trait, your Sim will get boosts in the following skills: Cooking, Gourmet Cooking, Baking, Gardening, Handiness, Fishing, and also gets smaller boosts in Mixology, Photography, and Charisma.

The trait gives boosts in the following careers: Detective, Culinary, Babysitting (though this would require a mod)

The trait also triggers 2 buffs. The Long and Happy Life Buff occasionally appears and will give a boost in all the same skills as the trait. It only appears for 1 in-game hour and is a Happy buff. The next buff is Ah, Kids! which is a Playful buff, though there are no boosts from it.


Conflicts:
Since this is not an override, there shouldn't be conflicting with any mods.