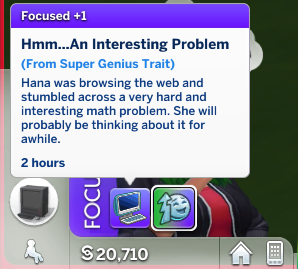 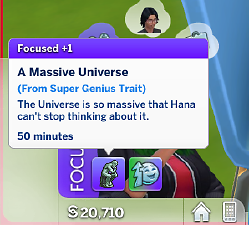 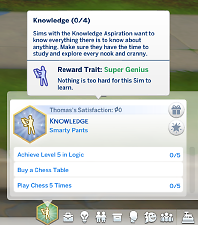 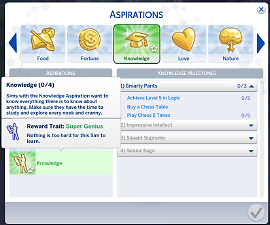 1/24/2021:
*Remade the entire aspiration.
*Reward trait renamed from Super Genius to Senior Sage.
*Several new buffs.
*A new social interaction.
*Support for newer careers and skills.
2/12/2021:
*Added 4 new buffs related to the Impart Knowledge interaction.
**The Actor Sim (the one imparting knowledge) can get a Confident buff; 50% chance.
**The Target Sim (the one having knowledge imparted on) can get an Embarrassed, Focused, or Dazed buff.
**50% chance of the Target Sim getting any buff, the Focused buff has a slightly higher chance within that 50%.
*Added a boost for the Paranormal Investigator career.
*Added a boost for Spellcasters gaining XP.
*Added a boost for Vampires gaining XP.
*Increased the boost for E-Sports.
*Decreased how often the "A Massive Universe" buff appears.

The aspiration will give your Sim whims; though none of them are new whims. Basic things, like Read a Book, Play Chess, Level up a Skill, etc.

University is also boosted, along with High School if you manage to complete the aspiration before aging up. I even added a Grade School boost if the trait is cheated onto a Child.

Additionally, the trait will boost the Retail, Fast Food, and Barista careers by 5, however Sims will have a chance of getting a tense buff called "Wasted Brain Power" from these careers. This buff will slow down learning any skills.

While browsing the web on a computer or phone, Sims may get the "Hmm...An Interesting Problem" buff, it's a Focused buff that increases learning Mental skills. Sims may also randomly get the "A Massive Universe" buff which boosts Mental and Creative skills.

Sims with this trait will see their Fun and Social needs decay slower. The Sim's autonomy will focus on doing mental activities.

They also have access to a new social interaction called "Impart Knowledge", this will give a small amount of Logic or Mental skill to the target Sim. The Actor Sim has a 50% chance of getting a Confident buff called "Knowledge Imparted" when doing this. The Target Sim has a 50% chance of getting any of the following buffs: "Wait, What?" (dazed), "How Did I Not Know?" (embarrassed), and "Yes, I See" (focused). The "Yes, I See" buff has a higher chance of appearing than the others.

Updates:
1/24/2017:
*The aspiration is now in it's own category. This is to prevent problems with the new Knowledge aspiration in TS4 Vampires.
1/25/2017
*Renamed the "Read 3 Books" objective to "Finish Reading 3 Books".
*Renamed the "Buy a Rocket" to "Own a Rocket Ship".
*Changed the satisfaction points for completing several objectives.
*Changed the description of several objectives.
1/31/2017:
*Re-balanced the reward trait's skill and career boosts.
*The reward trait now has slower motive decay for Fun and Social.
*Added some more Whims to the list for both the aspiration and reward trait.

The original aspiration had 6 levels and each were different depending on age. So I took the 1st from Teen, 2 from Adult, and 1 from Elder. When creating each level I pulled from the name and the original aspiration's wants. In the end, the first 3 levels focus on Logic, Programming, and Rocket Science respectively.

The aspiration will give your Sim whims; though none of them are new whims. Basic things, like Read a Book, Play Chess, etc.

*Achieve Level 5 in Programming
*Buy a Bookshelf
*Read a Book

This trait gives boosts in every skill, but larger for Mental ones. And the trait also boosts the following careers: Doctor, Scientist, Criminal , Entertainer, Tech Guru, Detective, Secret Agent, and Astronaut.

This trait causes 2 buffs. Sometimes, at random, a Sim's mind wanders. And when they're a Super Genius, it wanders into thinking about how massive the universe is, this results in the "A Massive Universe" buff. This buff gives an extra boost to all Mental skills and a slightly smaller boost to Creative skills. The buff also puts your Sim in a Focused mood.

Another buff happens sometimes on the computer when you have your Sim Browse Web. I don't know what site they went to, but they came across a complex math problem that's now stuck in their head. This is the "Hmm...An Interesting Problem" buff. It's a Focused buff that gives a slight boost in all Mental skills.


Conflicts:
Since this is not an override, there shouldn't be conflicting with any mods.