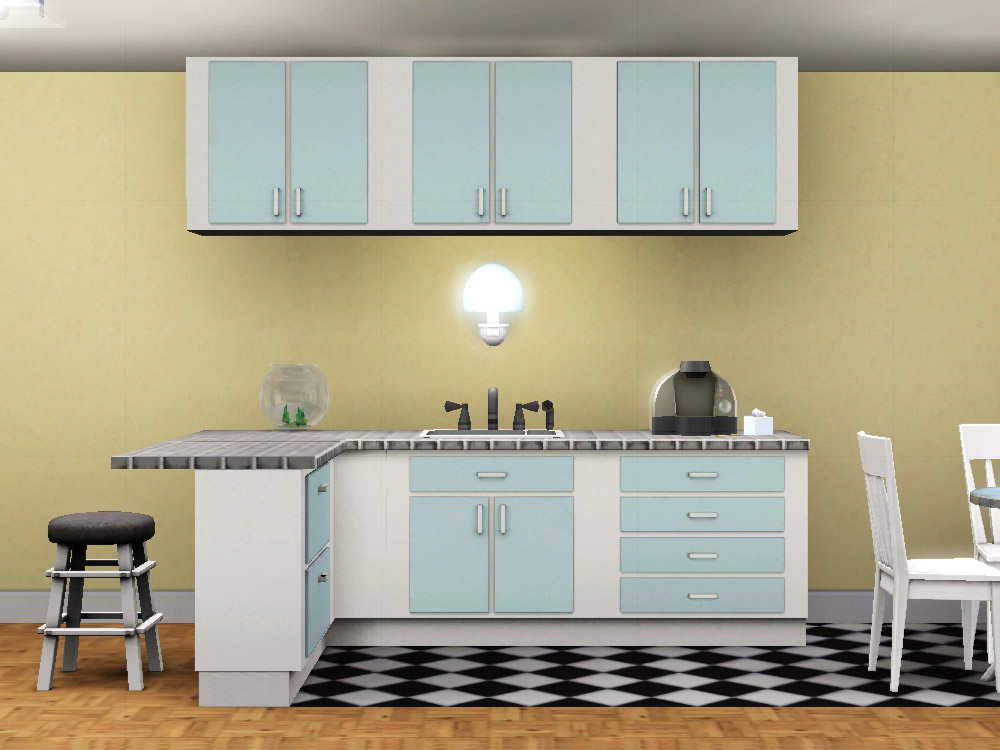 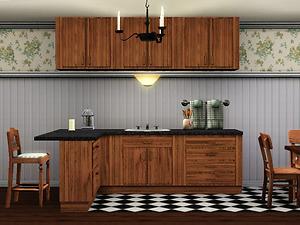 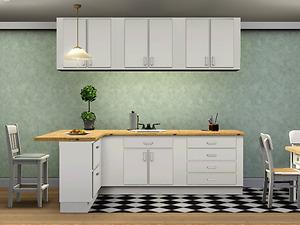 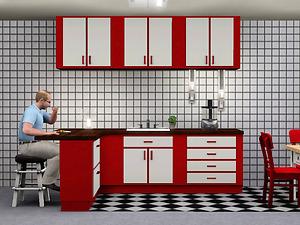 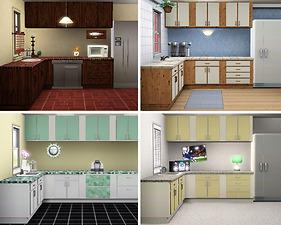 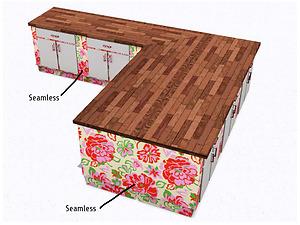 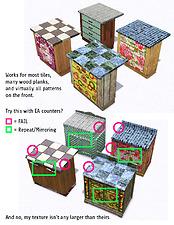 4,130 Thanks  Thanks     354 Favourited
This is a new mesh, and means that it's a brand new self contained object that usually does not require a specific Expansion pack (although this is possible depending on the type). It may have Recolours hosted on MTS - check below the description for more information.

Picked Upload! This is a picked upload! It showcases some of the best talent and creativity available on MTS and in the community.
This is a simple, cheap kitchen – along the lines of the TS2 "Krampft" one, only better. It consists of a counter, a counter island, and a cabinet, plus end and corner elements. The counter is the one with doors + drawer, the island has four drawers on the base mesh and two on the ends.

One preset for all elements, shown above. In 1.8.25 games, you need to wait for the swirly preview to appear for it to work right away, since it's included as an XML, in WA games it won't show up (see below). Sorry – but after I spent a day making four presets for all nine meshes and *then* discovered the entire thing was fubar, I'm not going to do it a second time.

They're in the catalogue in Surfaces > Counters/Islands/Cabinets. The counter costs 100§, the island 120§, the cabinet 85§.

Features:
The counter and island packages are large since they each contain a full set of custom dirt overlays – this was necessary because they are mapped differently from the EA counters, so I couldn't just link to those textures. There should be no unnecessary cruft in the packages apart from that.

The sunshadows of the corner island are a bit too narrow on one axis .. not sure if I can muster the patience to fix that. It would only matter when they're actually used outdoors, like for a beach bar, and I guess there are more appropriate counter islands for that sort of thing.

For WA (or equivalent base game version) users, the objects initially show up solid black instead of with my preset – to me it looks like this has been fixed in one of the later patches. Workaround for those who want to stick with an old version of the game: make your own preset in CAST, and use that. Unfortunately I don't know of a way to provide my own presets – exporting as .sims3pack doesn't work in my game (I believe that's an OS X issue), and various ways of packaging them haven't worked out so far.

Seams between counters: please take a close look at the thumbnail picture of this post (white/blue kitchen with yellow wall) – see the seams in the EA wallpaper (and in the counter to the left of the sink)? If that's what you see, then you most probably have a lame graphics card like me, and there's no need to post about it .. it's just the way the game renders things (I believe it becomes very apparent on these counters since they're so plain otherwise – on a heavily decorated one, I wouldn't see it either). If you see something else, please post with a screenshot.

On most of the screenshots there is a dropshadow missing on the counter island ends – this is already fixed (I only didn't want to re-take all of the screens just because of that). I also moved the cabinet down a tiny amount so that it now lines up properly with small tiles and the high EA panelling (on the screenshots it does not, that's still the old mesh).


I don't take requests. Please respect that and do not post here or PM me with requests. People of the "plz make stuff for me" mindset, see this thread.

Feel free to recycle any and all parts of this if you want to do stuff like add-ons, different versions, more channels, etc – I can upload original PNGs of my textures (uncompressed) if there's any demand for it. All I require is 1. a direct link to this thread if (and only if) you include recognisable parts of my version in something you upload, and 2. you must upload to a free, accessible, noncommercial site with no strings attached (I guess this would amount to a non-commercial, share-alike CC license).

If you need more info, see:
Back to download view
154 Comments / Replies (Who?)